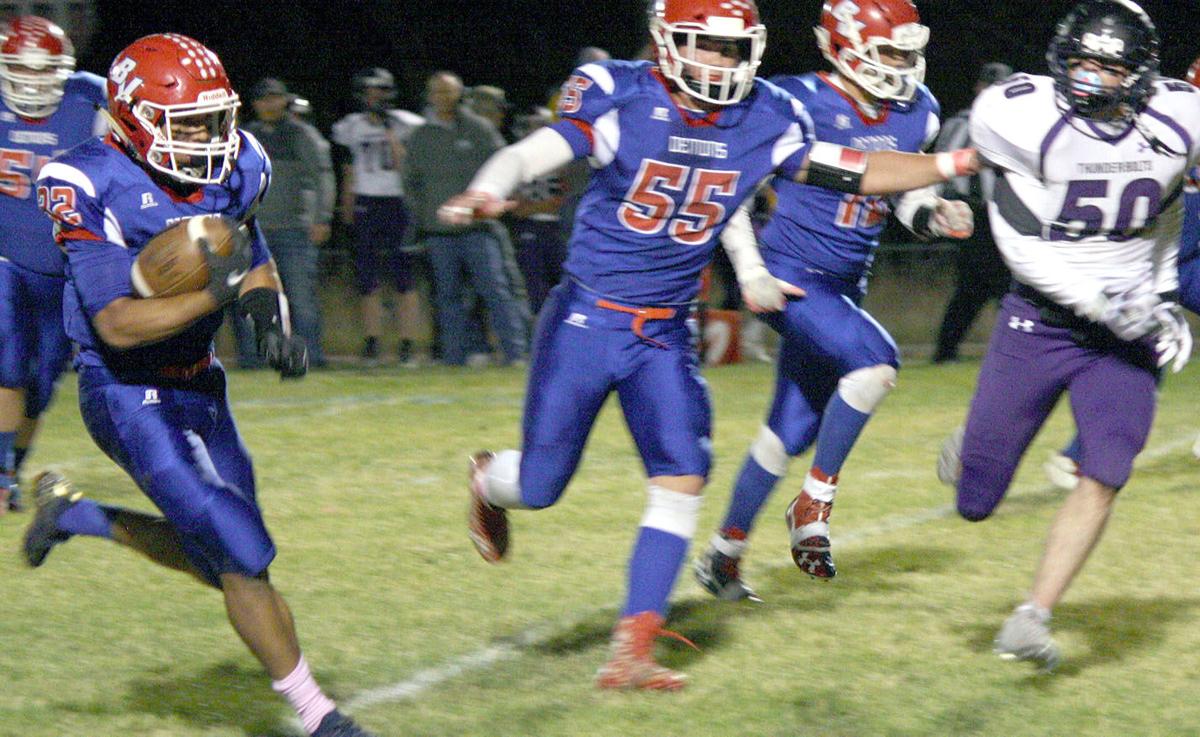 Buena Vista running back Jacob Phelps thunders across the field for some of his 153 rushing yards. Running behind a dominating offensive line, he also scored four times for the Demons. 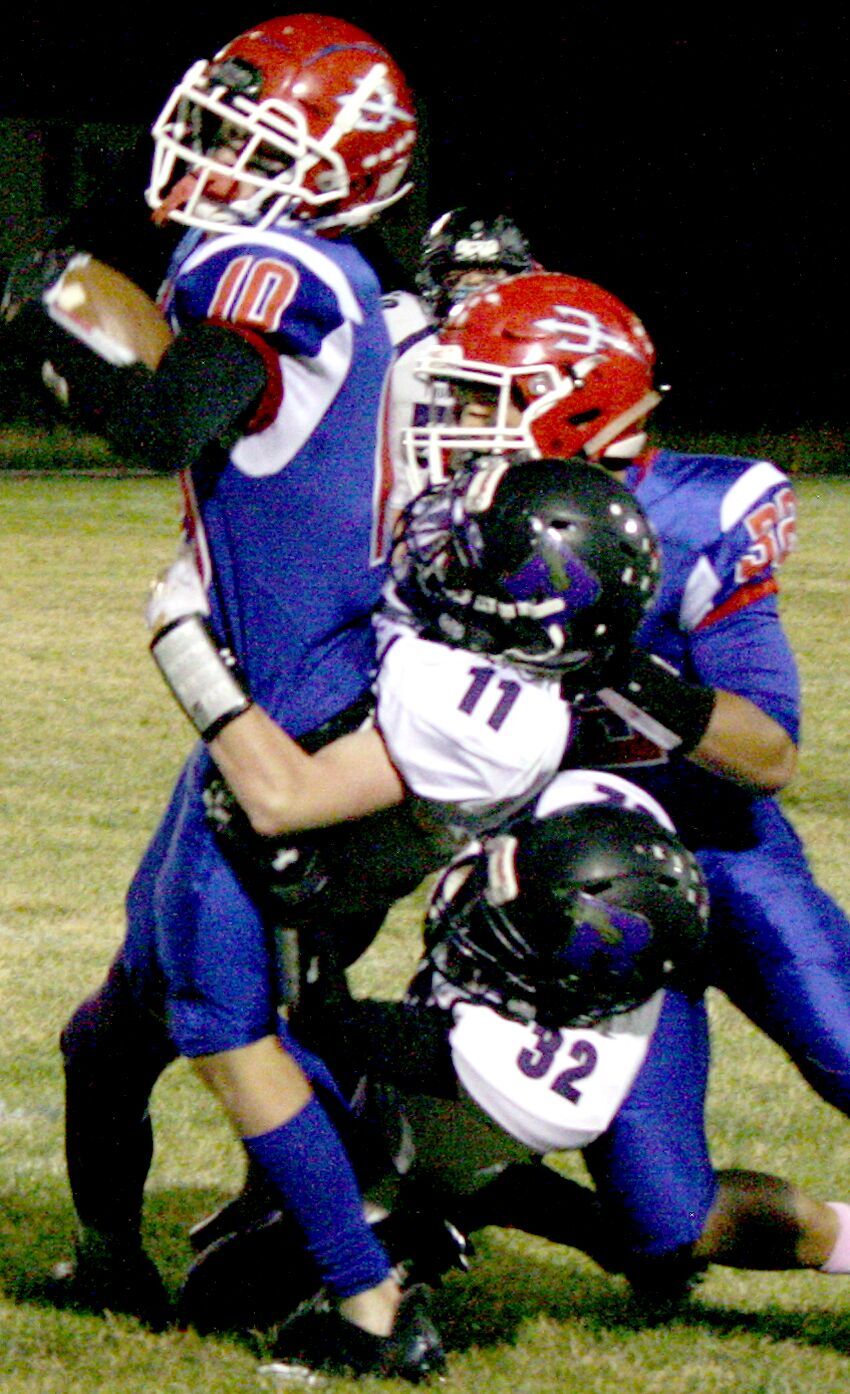 Buena Vista running back Jacob Phelps thunders across the field for some of his 153 rushing yards. Running behind a dominating offensive line, he also scored four times for the Demons.

Buena Vista jumped right in and kick-started its offense into a touchdown run less than 2 minutes into a 49-6 rout of Rye Friday night.

The 7-0 Demons had struggled early in recent games, so this week coach Matt Flavin flipped the script.

“Yes, that was nice to get going offensively right away. I always script the first bunch of plays, no matter what.

“This week we decided to surprise the offense by changing our script and getting a fast tempo going,” he said. “It seemed like it worked pretty well. We just changed pace during the game and it seemed like the kids liked it.”

Jacob Phelps ignited the home crowd with a 34-yard return of the opening kickoff, a run cut short at the Rye 37 when he tripped over a falling teammate while negotiating traffic up the home sideline.

Runs by Haden Camp from the 20, Ethan Flavin for a first down to the 7 and Tam Flowers set up the first of four Phelps touchdowns on 9 carries for 153 yards.

“Jacob did score on a couple long runs. We had great blocking out in front of him, and when he needed to use his skill to avoid the tackle, he did,” Flavin said. “Our outside game looked really good this weekend and was very well blocked.”

The BV defense forced the first of numerous three-and-outs, this time stopping the Thunderbolts following a 49-yard kick return to the Demon 46.

BV drove 80 yards in 10 plays, overcoming a block-to-the-back penalty on the second play that negated a Camp run to the 40.

“The penalty thing was an issue again this week,” Flavin said of the 70 yards given up. “I think some of them were because of their effort, which I can handle a few of those, but some of those were because of mental focus too.”

Facing third-and-10 from their 30, Ethan Flavin barreled through tacklers across the 30 for a first down. Two first down runs by Camp set up a 30-yard first-down run by Phelps, who cut left near the line and outran the defense to the end zone for a 14-0 lead with 6:02 left.

The next Rye three-and-out resulted in a high 20-yard punt into the wind that gave the Demons the ball at the Thunderbolt 31.

A penalty stalled that Demon drive on fourth-and-1 at the Rye 22.

Elijah Evan was the first of several Demon defenders to stop Rye’s Dylan Hurne on fourth-and-2 at the BV 43.

Two plays later, Phelps scored on a 55-yard jet sweep right and up the Rye sideline for a 21-0 lead with 10:44 left in the second quarter.

A 12-play Rye drive from its 22 to the Demon 43 ended when Orion Herrie took the ball away from the receiver at the high point of both of their jumps up to a high pass.

A 50-yard run by Camp up the left sideline set up a 21-yard scoring run by Flowers, who cut left and up the sideline where he powered his way through tacklers into the end zone for a 28-0 lead with 2:34 left in the half.

An unsportsmanlike penalty against the Rye huddle and an illegal motion penalty, backed them up the 10. The third flag of the last 2 minutes was against BV for roughing the passer.

Camp scored with 10 seconds left give BV a 35-lead heading into halftime. The Demons added a pair of third-quarter touchdowns.

“I think the defense played really well from the get-go and they took pride in doing their job,” Flavin said. “We discussed how important it was just to do your job, and trust that everyone else is doing the same.

“Most of the time with any game, there are breakdowns of players not doing what they are supposed to and that is when bad things happen.  Earning that trust takes time, and I think we are headed in the right direction,” he said.

With the mercy clock running, younger players got varsity time on the home field.

“It is always exciting to get those young guys in a varsity game,” Flavin said. “They deserve a chance to play under the lights if we can do it.  We were able to get them in and they had a blast, they played pretty dang good too,” he said.