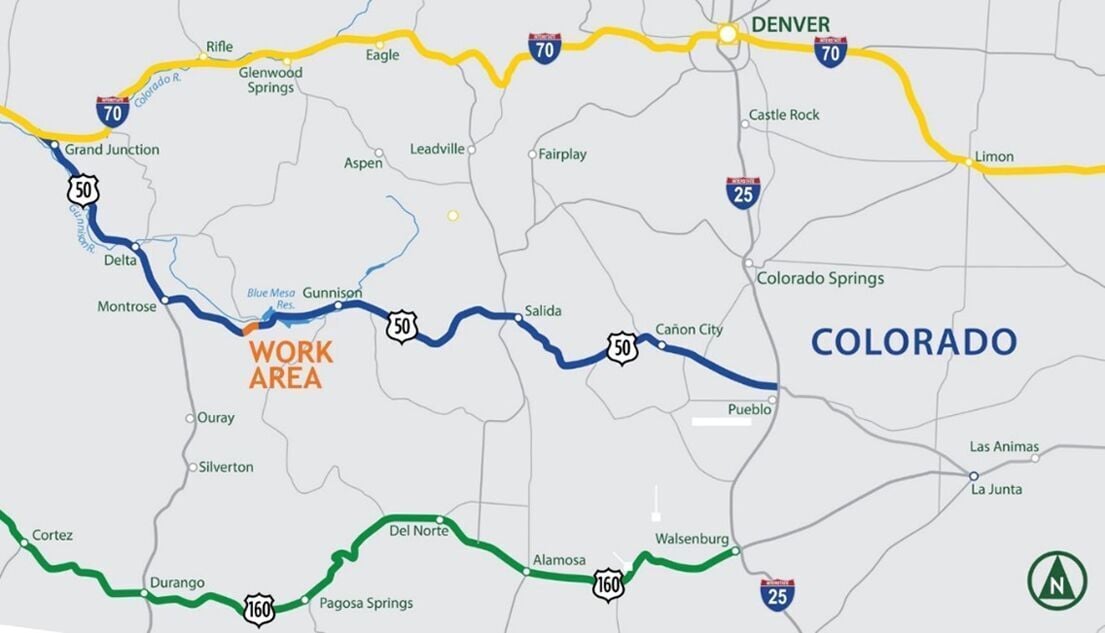 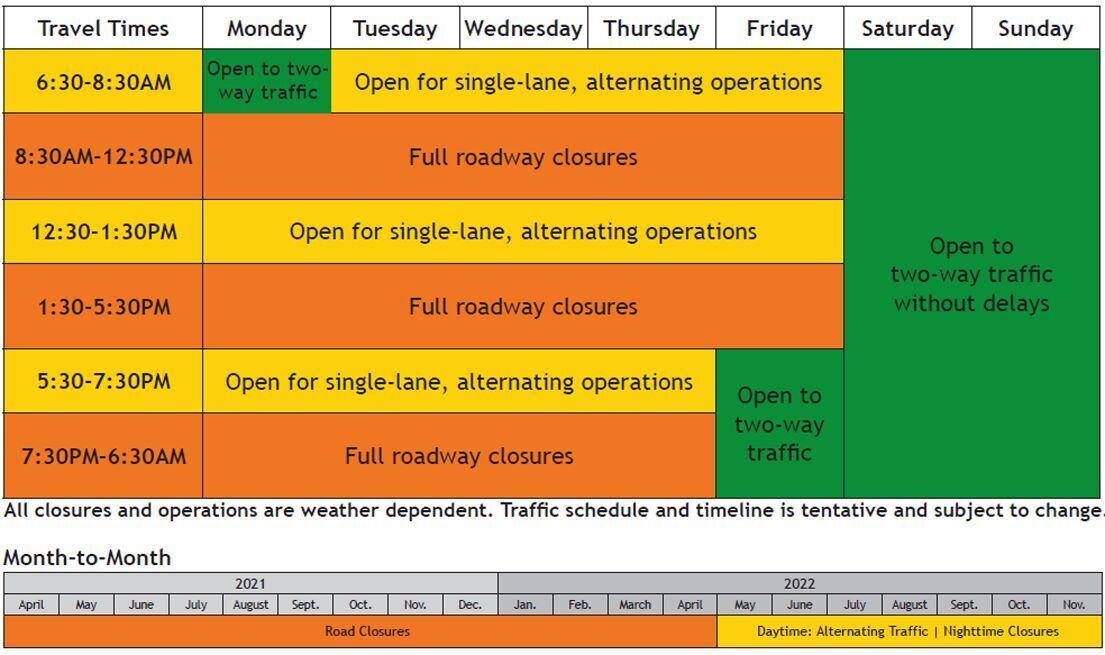 All closures and operations are weather permitting. Traffic schedule and timeline is tentative and subject to change.

All closures and operations are weather permitting. Traffic schedule and timeline is tentative and subject to change.

Construction on U.S. 50 will cause significant delays between Gunnison and Montrose in the upcoming months starting April 19, and will likely affect traffic patterns in the Central Peaks Region as motorists will drive north or south on U.S. 285/24 to avoid it.

The Little Blue Creek Canyon 4-mile critical safety improvement project is half way between Gunnison and Montrose, from mile post 123 to 127.

The project is estimated to be complete by Nov. 4, 2022 with the most impactful construction, roadway and traffic operations anticipated to take place during the first year.

The project may cause some traffic flow changes in Chaffee County.

“It’s reasonable to anticipate less motorized traffic on U.S. 50 than would have been forecast because drivers will likely opt for U.S. 160 or I-70, Keith Baker, Chaffee County commissioner said.

On the other hand it may divert traffic north or south on U.S. 285/24 through Chaffee County.

“Motorists are creative and may choose alternative east-west routes through Chaffee County by connecting U.S. 24, U.S. 50, and U.S. 285 to U.S. 160 and I-70. There are many attractions in our region to make these alternatives enticing.”

“I think its going to be hard to figure out,” Greg Felt, Chaffee County commissioner said. “... some people will take U.S. 160 some will take I-70. But it depends on where they are going. We get a lot of traffic funneling up from south and southeast, that will be more apt to travel north to I-70. It may result in more traffic going into Buena Vista.”

Full closures of the construction area are necessary in rockfall areas of the project where blasting will take place, according to CDOT.

The Federal Highway Administration and Central Federal Lands Highway Division will work closely with the contractor American Civil Construction Mountain West and CDOT to lessen impacts from closures when possible.

Improvements will focus on safety along U.S. 50 in the project area, including realignment and widening U.S. 50 to two 12-foot travel lanes with two 4-foot-wide paved shoulders, CDOT reported.

This work is essential to improve safety for motorists traveling through Little Blue Creek Canyon, which currently has narrow lanes and sharp turns.

Travel impacts for motorists will be consistent throughout the first year of the project according to CDOT.

According to CDOT, if there is an emergency closure of Interstate 70, full closures on this project will be reduced.

When U.S. 50 is closed, local passenger vehicles and small trucks can use Colo. 92 as a local alternate route, CDOT reported. All other trucks and recreation vehicles more than 70 feet long will need to use I-70 to the north, U.S. 160 to the south or wait for one of the planned openings. Allow for additional time due to the restricted open times and single lane operations.

Hazardous materials vehicles are required to use I-70 to the north, U.S. 160 to the south or wait for one of the planned openings.

Impacts to tourism in the

“People coming from the west will figure out how to get here, Felt said “It seems more and more we are getting destination traffic. A lot of our traffic was passing through 30 years ago. Now they are staying for a week.”

Felt said a new destination now affecting tourism in the Central Peaks region is the paved road over Cottonwood Pass, County Road 306. That road may also attract visitors this summer.

“It’s a multi-variable equation (so) it’s hard for me to imagine we will all be sitting around wondering where everyone is.”

It might seem as though fishing in the Gunnison River Valley would be apt to offer anglers quiet solitude without a lot of pressure from other anglers but Felt said Gunnison too is a destination area and has been for quite some time.

“Historically Gunnison has been more of a destination than our valley. It appears that a lot of their visitation is from Texas and Oklahoma and that will continue unimpeded.”

But tourists from the Front Range may be a more common fixture from Salida to Gunnison this year as instead of continuing on to destinations such as the Black Canyon National Park, they may stay closer to home, Felt said.

“We all know it’s unfortunate that a lot of road work has to happen during the busiest time of year, there’s no getting around it,” Felt said.