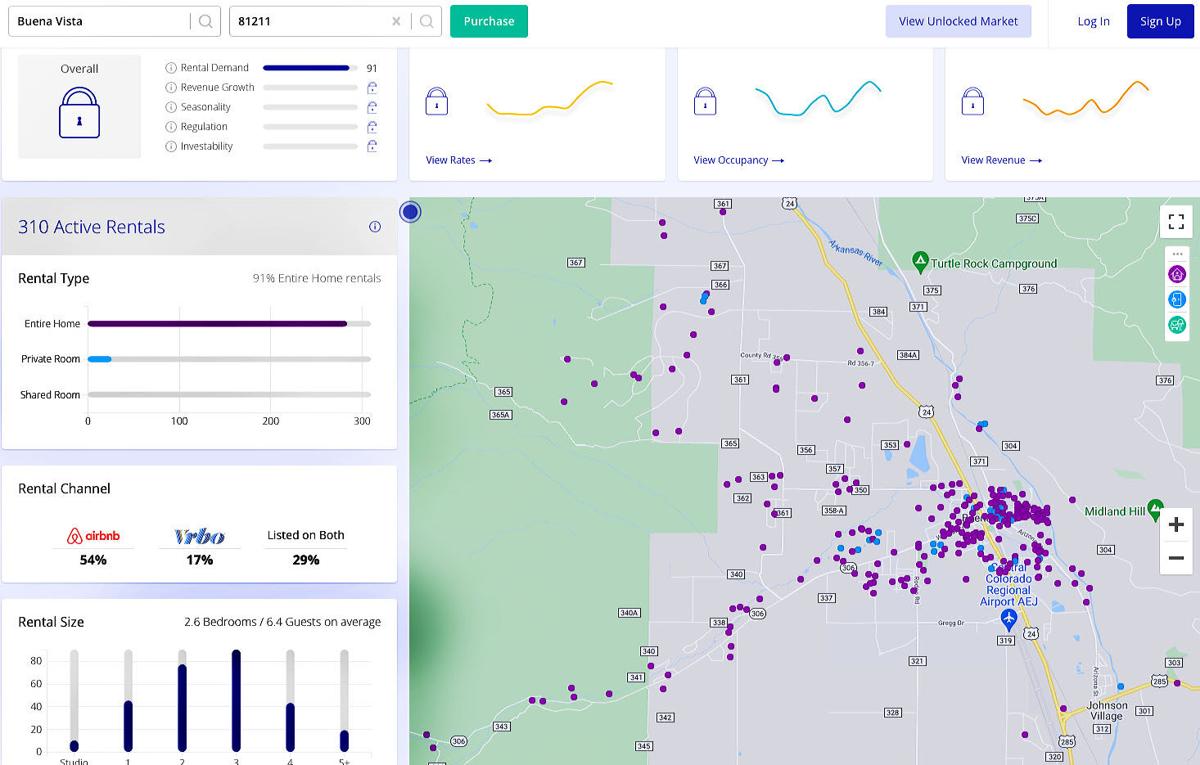 A real time look at short term rental activity is as reported by airdna.com at 10 p.m., Friday, Sept. 17. The report shows 310 rentals active in the Buena Vista area. The report also states 91% were rentals of the entire home, rental sized averaged 2.6 bedrooms with 6.4 guests on average. 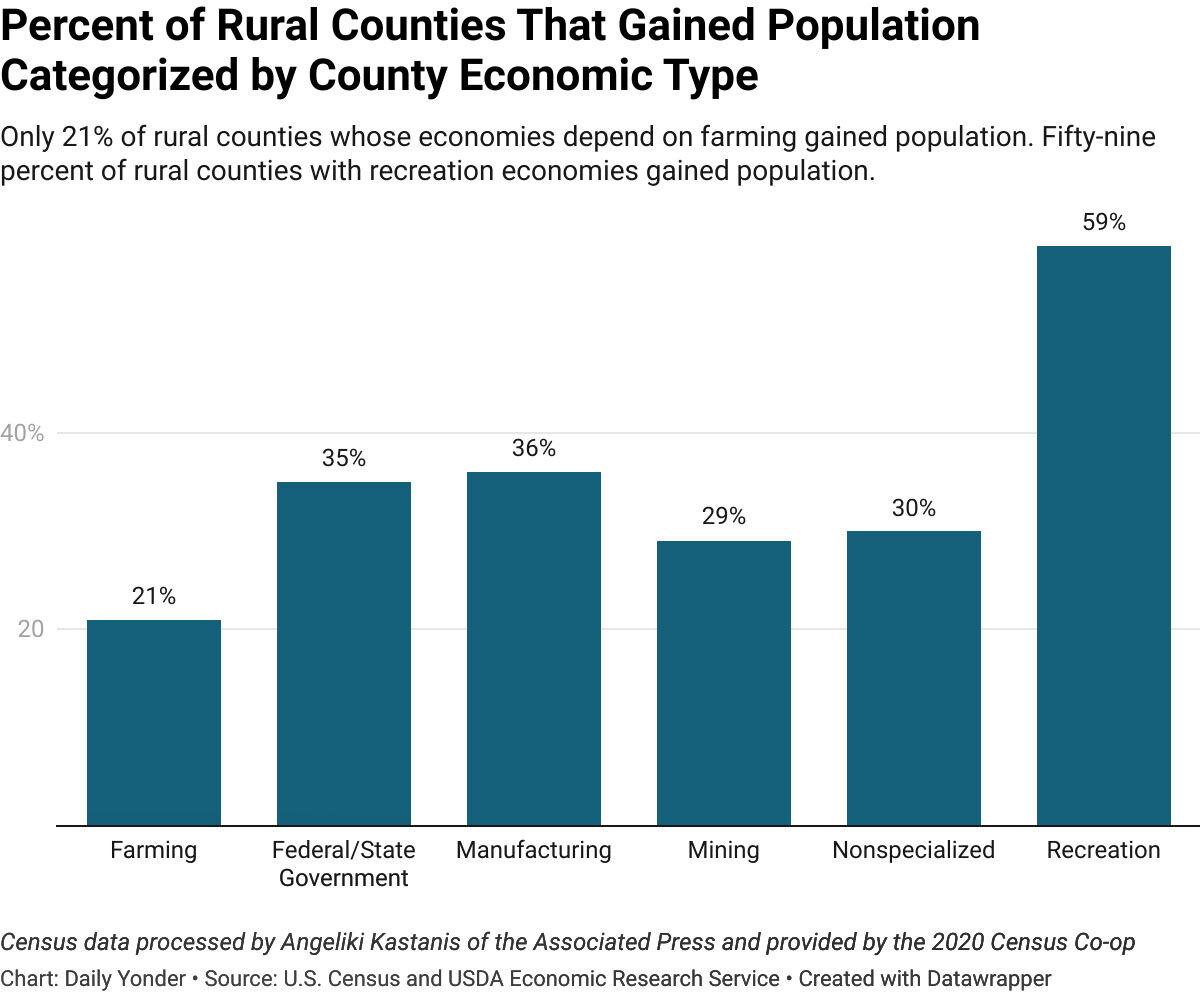 Census data processed by Angelik Kastanis of the Associated Press and provided by the 2020 Census Co-op.

A real time look at short term rental activity is as reported by airdna.com at 10 p.m., Friday, Sept. 17. The report shows 310 rentals active in the Buena Vista area. The report also states 91% were rentals of the entire home, rental sized averaged 2.6 bedrooms with 6.4 guests on average.

Census data processed by Angelik Kastanis of the Associated Press and provided by the 2020 Census Co-op.

Disinterested academic studies confirm what some Buena Vista town staff and elected officials persistently have denied – that short term rentals cause increases in rents and decreases in affordable housing supply.

The deliberate exclusion of the housing crisis from the discussions around short term rental policies ignores a rapidly growing body of research, both empirical and theoretical, which places it squarely into the conversation.

This explains the impetus behind 2015 and 2016 comparative policy analyses by Rees Consulting. The Montrose-based firm produced reports examining the impacts of STR proliferation and municipal policy strategies with respect to workforce housing.

The reports show that in small Colorado mountain towns such as Aspen, Breckenridge, Telluride, Vail and Crested Butte, STR density increases led to reduction of available rentals previously used by employees, which increased demand for workforce housing and reduced its supply.

The arguments against examining Buena Vista’s housing crisis while crafting STR policies have been that rising costs and diminishing availability are coincidental — occurring at the same time as but not caused by the proliferation of STRs — and further that the crisis predates the STR phenomenon and ought therefore to be understood separately, without association.

Additionally, it has been argued that while STRs may be exacerbating housing crises elsewhere, that doesn’t speak to the unique conditions to be found in Buena Vista.

“Unfortunately, there is not enough local data to analyze as of yet, so there’s not a defensible way to determine causality between the number of local STRs and the lack of local affordable long-term rentals,” said Gray. “What other communities have shown us is that there does appear to be a tipping point, and it’s a very good thing that we are addressing this trend well ahead of that point,” she said.

Asked what that tipping point is and what data shows BV or Chaffee County to be ahead of, Gray demurred.

“There are numerous communities struggling to maintain workforce housing amidst an increase in STR’s – Google should bring up quite a few. Crested Butte is a nearby neighbor deep into this conversation,” she said.

A study from 2018 published in the journal Land Use Policy examined 237 small cities in Oregon, finding that towns with 5% or greater STR density experienced housing stock impacts. BV town staff has reported STR density of almost 9%.

Gray also noted that data from the U.S. Census and building permit data could be used to determine questions of housing stock.

A May, 2021 report called “Chaffee County Land Use & Housing Affordability Solutions,” presents no updated statistics on vacancy or income but defines workforce or moderately priced housing as renting at less than $1,200 per month and $400,000 to buy.

Conditions similar to those found in Buena Vista have been studied, both in terms of Colorado mountain towns and small towns popular with tourists and the forces at work are clear enough.

“I routinely had city officials minimize the effects of STRs, but not accepting any relationship seems to show a disinterest in learning about any possible relationship,” said Brendan O’Brien.

O’Brien earned a Master of Science for his research on short term rental effects on housing in mountain towns across the West. His thesis examined how current STR trends in the U.S. West fit a larger pattern of financialization of the concept of home.

Instead of home being defined as affordable and stable shelter for community residents, it is conceived primarily as an investment or financial tool.

He came up with similar numbers to snapshot data presented by Benson in recent board of trustees work sessions and said STRs were very likely impacting local long term housing stock.

Vacation rentals are nothing new, and neither is the Buena Vista housing crisis. However, the entrance of vacation rentals into the sharing economy with the advent of AirBnB in 2008 created new market distortions.

A study of AirBnB published in Harvard Law & Policy Review in 2016 describes the causal mechanisms between STRs and their impacts on affordable housing.

“So long as a property owner or leaseholder can earn a substantial premium from AirBnB rather than renting to city residents, there is an overpowering incentive to hotelize entire buildings, further reducing the aggregate housing stock,” the study says.

It goes on to explain how short term rentals mix markets between local residential housing and tourist accommodations, which distorts the local long term housing market. These distortions both raise rents and lower the stock of affordable housing.

A data-driven study titled “The Sharing Economy and Housing Affordability: Evidence from Airbnb” and presented at the annual Economics and Computation conference in 2018, presented similar findings using data collected from the entire United States.

“To summarize the state of the literature on home-sharing, research (including this paper) has found that home-sharing 1) raises local rental rates by causing a reallocation of the housing stock; 2) raises house prices through both the capitalization of rents and the increased ability to use excess capacity; and 3) induces market entry by small suppliers of short-term housing who compete with traditional suppliers.”

So, while not a sole or most significant factor, short term rental density is recognized to cause an increase in rents and decrease in supply, especially in tight housing markets.

And as reported by every realtor here in town, the Buena Vista market is indeed tight.

Asked why BV’s housing crisis was not a factor in STR policy discussions, Mayor Lacy pointed out steps town government has taken since about 2015 to address the housing crisis. He noted the construction of 48 apartment units at Collegiate Commons and the town’s participation in the creation of the Chaffee Housing Authority.

The last business item on the agenda of the Sept. 13 board of trustees meeting was a report from new town planning director Joseph Teipel on grant applications for more apartments and workforce housing.

That is, town government clearly has plans in the long run to address BV’s housing crisis.

But without coming to clear terms about the relationship between the housing crisis and the still-accelerating proliferation of short term rentals, the risk is policies with blind spots and compromised efficacy.

A 2020 study by Kate Bell in The Agora Journal of Urban Planning and Design reviewed much of the literature referenced in this article. The study concludes by recommending local regulations responsive to community needs.

Bell’s study does note the importance of crafting regulations with the tourism industry in mind in communities where tourism is an economic driver.

Buena Vista town treasurer Michelle Stoke has described tourism as one of the town’s three economic pillars, along with housing construction and the prison.

“Zoning reform should be viewed as a long-term planning tool to address the changing housing marketplace due to STRs rather than a quick fix to eliminate or reduce current STR-induced pressures on the market,” Bell says.

Additionally, for areas such as BV with a high and low season, that study suggests regulations to limit the amount of time a property can be rented short term, in order to mitigate market distortion.

“A hard unit cap could hamper the robust tourism industries that are the backbones of these local economies; making otherwise vacant properties unavailable for use for short-term visitors could reduce potential tourism revenue with little benefit for the local, longer-term rental market,” Bell says.

“A time limit to capture the peak tourist season while preventing year-round de facto hotels from filling the rental market would do well to support these areas’ major industries without inflating rental prices year-round,” she says.

Other recommendations from the study include tax breaks for hotel construction and lodging taxes for STR income, the revenues of the latter to be used exclusively for affordable housing development and preservation.

Parts of Buena Vista’s STR regulation are in good accord with Bell’s study. For instance, the town has instituted licensing and is keeping a registry of license holders. Code enforcement is also cross-referencing the registry with STR listings.

But the fact remains that owning multiple properties in and around town presents a great opportunity as market distortions inflate values and encourage leveraging higher rents.

Unwillingness on the part of local officials to consider the housing crisis while crafting STR policies is indicative of a complementary willingness to rely on high schoolers, adult children living with parents and the unhoused to service the town.

In short, allowing people, local or not, to capitalize on housing booms without duly raising wages or investing in public housing will someday lead to bust.

Reitter, B. (2014). Presentation on Workforce Housing in Buena Vista. Retrieved from: https://buenavistaco.gov/documentcenter/view/581