Patrons enjoy cocktails, pizza and Italian food in Crave at the corner of Railroad Avenue and Main Street. 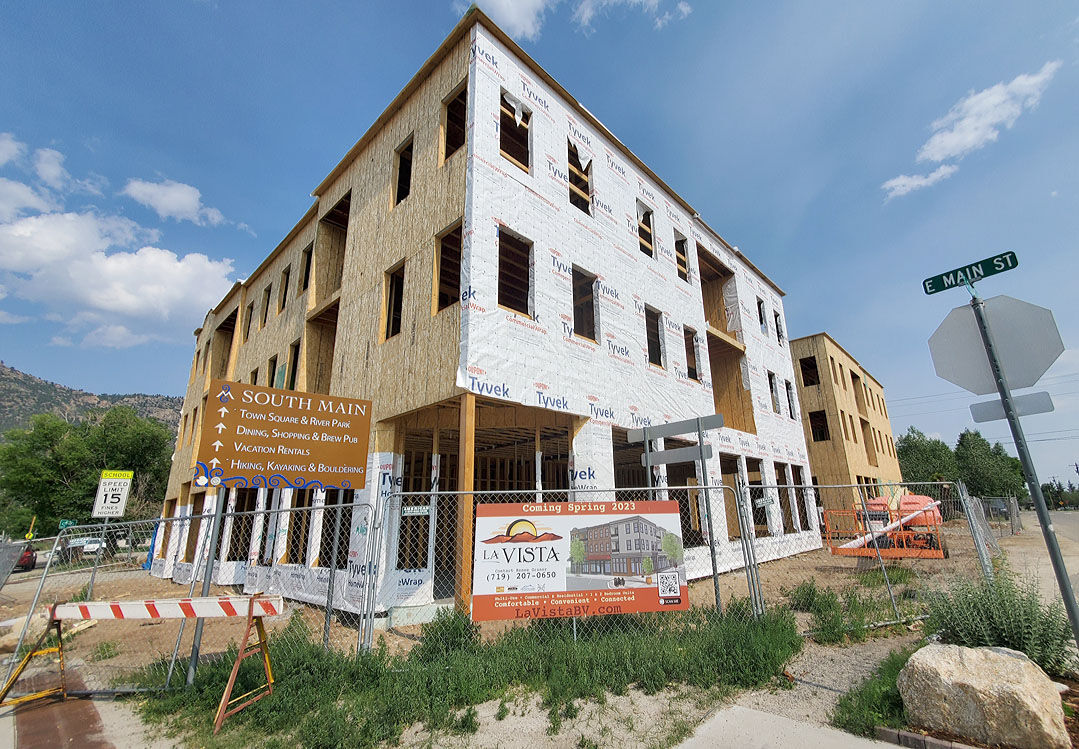 Five retail units and sixteen long term rentals are well underway at the building site for La Vista at the intersection of Court Street and Main Street. 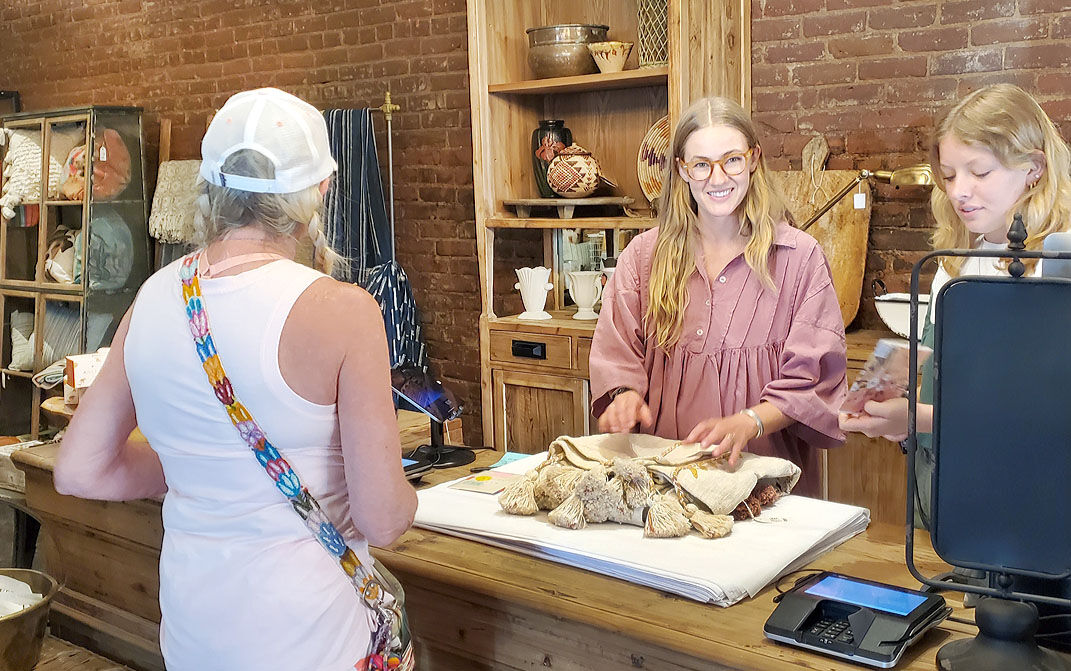 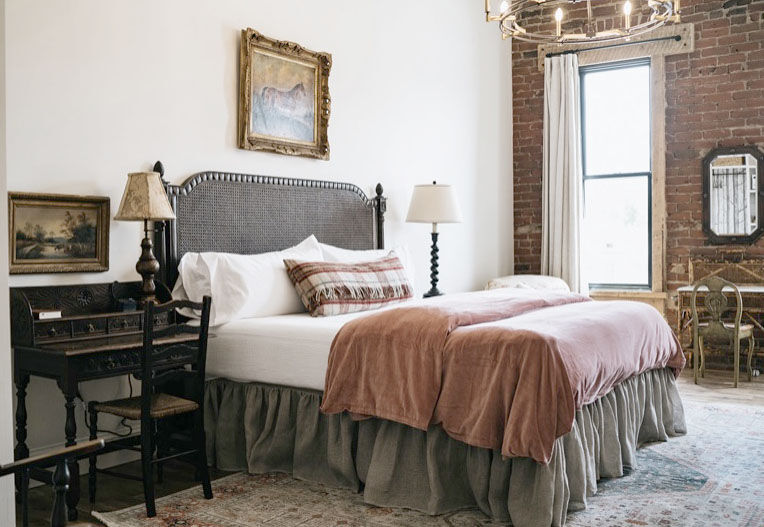 Patrons enjoy cocktails, pizza and Italian food in Crave at the corner of Railroad Avenue and Main Street.

Five retail units and sixteen long term rentals are well underway at the building site for La Vista at the intersection of Court Street and Main Street.

While the public sector gets busy making sure East Main Street is properly lit, the private sector is even busier making things to look at.

At the northeast corner of Main and Railroad streets, Sharon Young has completed renovations on the building that last housed Gone to the Dogs and the Green Parrot bar.

“I worked with Suzy [Kelly] down at the museum, with all the black and white pictures, so that I did all the bays authentic to what it was before,” said Young.

She said she’s been visiting Buena Vista for 50 years and decided a year ago to make it permanent and retire here.

Starting from the corner, here’s a look what you’ll find in the redesigned space and along East Main Street.

“We thought the town needs more food. So I talked Ryan into taking that nice corner anchor, because it really brings the crowd in and it kind of sets the stage,” said Young.

Ryan McFadden, who those in the know will recognize from Eddyline South Main restaurant and Simple Eatery, is now offering up cocktails, pizza and inspired Italian dishes at Crave.

McFadden soft-opened Fourth of July weekend and has been serving at max capacity virtually ever since.

“We’ve been on a waitlist constantly,” he said.

“We started at half capacity because staffing and the labor pool is just non-existent right now. We can double our seating that we have right now,” said McFadden, eyeing the room, “but we’ll just scale it and get used to it and work out the kinks.”

He said he hopes locals will enjoy Crave and is trying price the menu accordingly.

“This is who we’re appealing to — I want this to be the upper scale for the working class. Like they can come in but it doesn’t break their bank and they don’t feel like they gotta put a suit on.”

In homage to a grocery store of yore, The Long Table opened June 30.

“Our goal is to have grab-and-go drinks and food and coffee, and slushies for the kids and ice cream. Really an authentic, tiny general store that would have been here — well, basically, it was here at one time,” said Young. The building once housed BV’s grocery store.

BV native Tanner Richmond was behind the counter a little more than a week after the opening.

“It’s been really good. It’s a lot of fun,” she said. “We still have a lot of stuff coming in like our drink coolers and everything. So it’s still a work in progress.”

The narrow stall’s wall is lined with shelves to the west, full of gourmet snacks, jams and other edibles. Beverages and the sales counter line the east side and in the middle stands, appropriately, a long table.

Young said it has already once been used for a wedding group’s banquet. They were staying upstairs.

The third new operation to open up in the same building was a quaint boutique. With dinnerware, rugs, coffee table books and decor galore, the Mercantile collects a varied spread under big, circular electric candle chandeliers.

“This is the third time that there’s been a mercantile in this building,” said Young.

The manager is Mary-Lou Sitz, who moved to BV last fall.

“People walk in here that knew the Green Parrot,” she said. “I think it’s a very different take on the space, but hopefully for the better. That’s the feedback we’ve gotten.”

Blake Gilbert and his brother Matt manage 13 rooms, 12 upstairs and one down, which comprise The Inn. Matt said tourists have jumped at the chance to stay in these revamped historical spaces.

“We’re booking as fast as we can clean the rooms,” he said.

Rooms were renovated to achieve a modern, rustic aesthetic. In keeping with the rest of the renovation, as much as possible was kept from the original, historic layout.

Matt and Sharon said members of the Historical Preservation Committee gave it their stamp of approval.

Fans of the Jailhouse Craft Beer Bar are encouraged to have patience. Not only will the craft brewhouse come back someday next to Crave on N. Railroad Avenue, but the historic jailhouse, tucked behind Spark Provisions and Louie’s Ice Cream Shop, will also return with spirit(s).

Lucas Ross, BV resident for 3 1/2 years, has taken over ownership and recently obtained a liquor license.

“We’re putting in all new everything,” he said. “It’s pretty exciting starting from a clean slate.”

Ross said he hopes to be open Labor Day to bring back craft beers and more.

“We’re going to have craft beer, wine, ciders, but I applied for a full tavern license. The plan is we’re going to add whiskey to the menu.”

The new building for the official bank of the Arkansas River is nearing completion at the intersection of Court and Main streets.

The bank has been operating at 413 Main Street since 2019. He said the move to the new building at 430 Main has been the plan all along.

The new location will also feature more room, parking in the alley and an ATM.

“This is a full banking facility that we’re excited to get moved over into” he said.

Kitty-corner to the new Legacy building at 505 E. Main, a totally new building has risen on the lot that housed Trader Tad’s resale shop for many years.

Rob Kelly is one of three owners working with architect Tim Sabo on the project. All are based out of Breckenridge.

Construction is on-pace after the group’s groundbreaking last December.

“La Vista is being constructed by Mr. Kevin Thomas of Highline Builders of Salida, and [is] ahead of schedule with completion planned in 2023,” said Sabo.

“Building started during the early days of the pandemic, and material supply-chain issues and record-high lumber pricing have had an effect on the project’s progress and budget, but Kevin has been creative and resourceful in keeping the schedule moving and he and the Kellys have found ways to keep the budget from getting out of control,” he said.

“We are so excited about this project and at the progress that Kevin and his team are making,” said Kelly.

Sabo said his firm, Allen-Guerra Architecture, had worked on residential projects in Chaffee County, but that this design with five commercial spaces and 16 long-term rentals would be their first mixed-use undertaking in BV.

Kelly and Sabo say the concept for La Vista is for it to be comfortable, convenient, connected and clean. That is, high quality, close to downtown, 100%-renewable-powered and with state-of-the-art internet connectivity.

Through La Vista, Sabo has also connected with other Main Street property owners and said he anticipates breaking ground on as many as four more mixed-use projects this fall.

Kelly said he’s thrilled to be a part of the BV community.

“We have thoroughly enjoyed working with the town leadership, partnering with the Historic Preservation Commission to ensure local/historic standards, and realizing this vision with local partners,” he said.