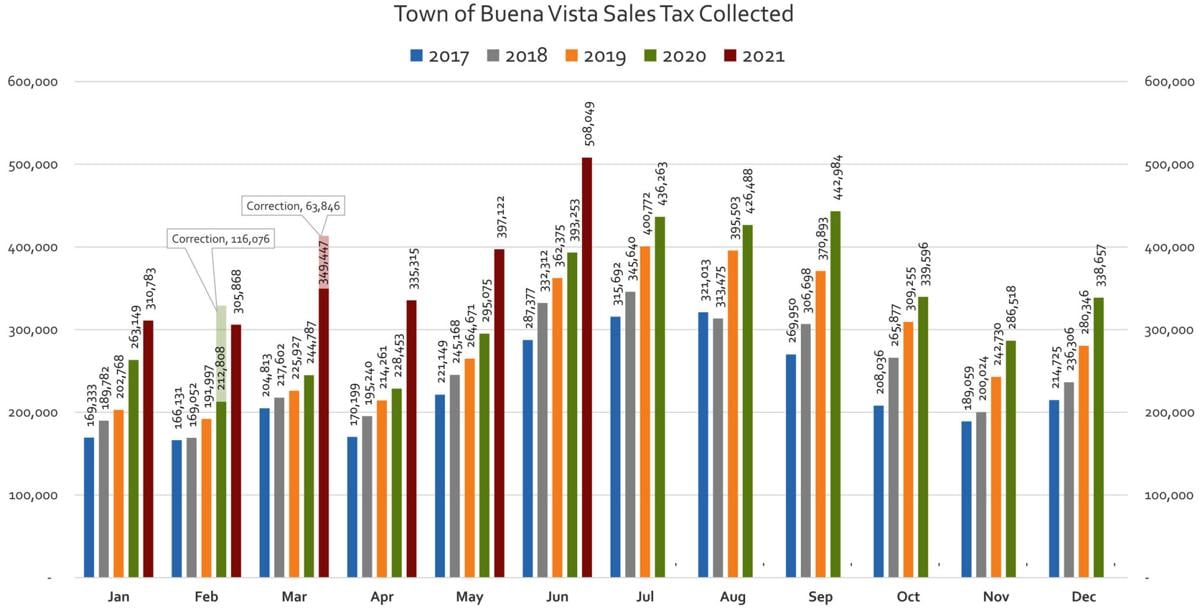 Town treasurer Michelle Stoke’s quarterly financial report on Aug. 24 came near the end of a long meeting. “Sales taxes: Doing good; balance sheet balances; the projected fund balances is good. Do you want me to go into more detail?” she asked. Good was something of an understatement.

“June is higher than any month has ever been,” observed trustee Libby Fay.

Stoke opened the floor for questions, which were few. Discussion of the report showing record-breaking tax revenue numbers and detailed breakdowns of town expenses lasted 3 minutes.

Highlights of the report do include more than $500,000 in sales tax revenues collected in June, the highest amount in Buena Vista’s history. The record may not last long.

The actual tax revenues are still coming in significantly higher than what was budgeted for 2021.

The overall financial report was very positive for the town. But Stoke remains cautious.

“We also feel that there will be a correction in the economy,” she said. “It’s just that with all the indicators in the economy going all different directions, it’s really hard to plan for it.”

Stoke said that Front Range tourists, among others, have found Chaffee County. She noted that BV is a short drive compared to other tourist destinations, and that Cottonwood Pass gives travelers even more options for camping and route planning.

Her quarterly reports will be issued a bit later from now on. The mayor and the board of trustees asked that she push the reports back from the close of the quarter in order to capture the full quarter of sales tax revenues.

“I believe my next one will be in November. Probably the first or second meeting in November, for the third quarter,” she said.