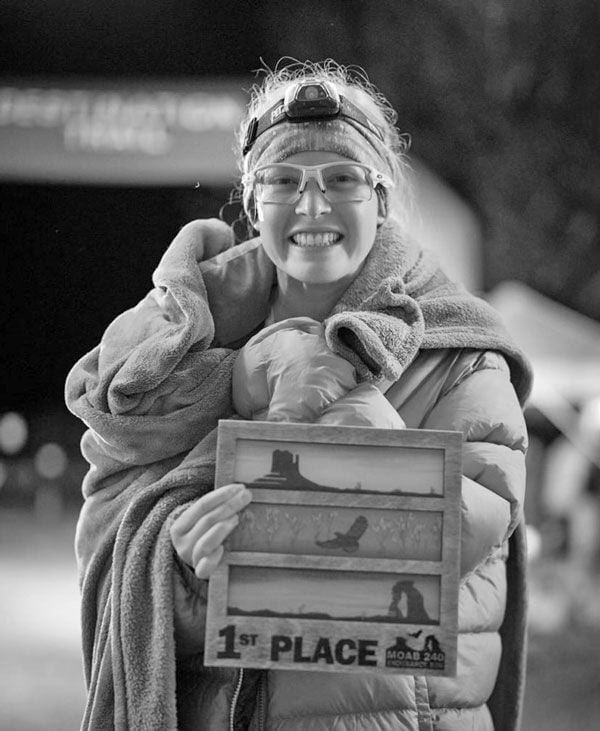 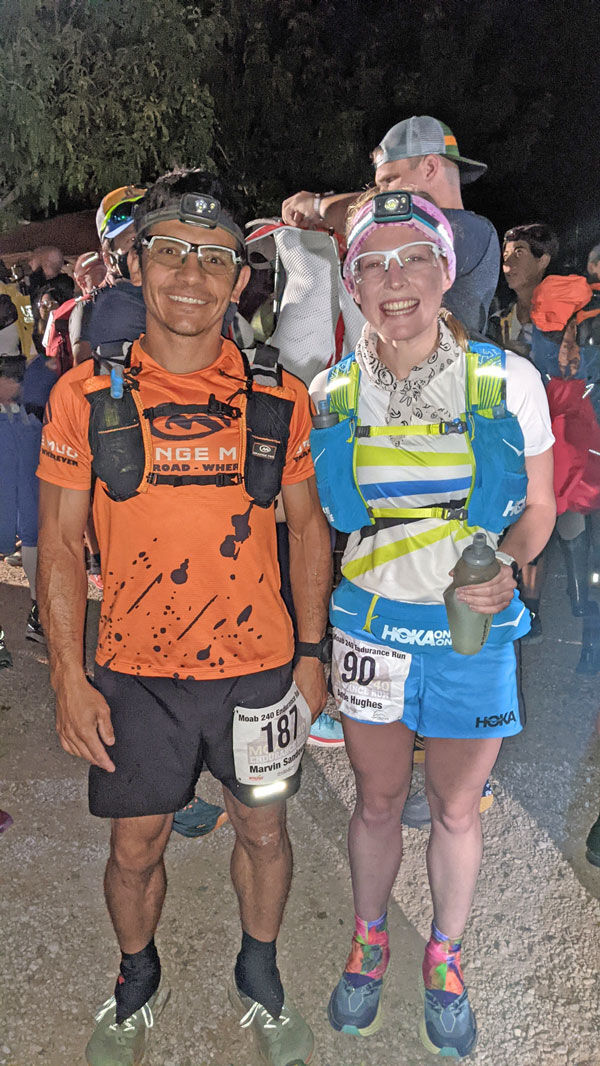 Leadvillians Marvin Sandoval and Annie Hughes pose for a photo together at the Moab 240, an ultra endurance race in Utah. Both runners finished top 10 overall and ran together for a portion of the race.

Leadvillians Marvin Sandoval and Annie Hughes pose for a photo together at the Moab 240, an ultra endurance race in Utah. Both runners finished top 10 overall and ran together for a portion of the race.

From quick naps trailside to long stretches of sleep-deprived running on desert trails, this year’s finish line of the Moab 240, an endurance race that stretches throughout Utah’s vast landscape, was welcomed by Leadville ultra endurance runners Annie Hughes and Marvin Sandoval, who ran a portion of the race together in early October.

Despite the grueling route, which spans 240 miles through deserts, canyons and the La Sal Mountains near Moab, Hughes and Sandoval both finished in the top 10 of 168 athletes. Hughes finished first for the women’s division and seventh overall, posting the race’s second fastest time for women on record — 68:50:02. Sandoval finished third overall with a time of 63:40:19.

This year’s Moab 240 marked the first 200-mile endurance race for Hughes and the second for Sandoval, who arrived at this year’s starting line with different motivations and a resume of successful races, including the Leadville Trail 100, which Hughes won this summer. Sandoval also ran the Leadville Trail 100 this summer and completed the Leadman challenge, which incorporates five different endurance races over the course of two months.

Hughes said she has wanted to run the Moab 240 ever since she watched local ultra runner Courtney Dauwalter win the race by nearly 10 hours for men and women in 2017. That same year, Hughes ran her first endurance race, but didn’t think she’d compete in Moab just four years later.

Last year, Sandoval entered the Moab 240, but dropped out near mile 70. This year, fueled by a summer of training on his bicycle and on foot with his burro Buttercup, Sandoval said he came ready to finish the race. But the finish line would not come easily.

The first day of the race proved beneficial for highlanders Hughes and Sandoval, who said they hardly ever train in heat. A light drizzle of rain that day kept them cool, and the local athletes made good time. But once the sun set, Hughes struggled to fight off exhaustion. At aid stations and on the sides of the trail, Hughes took naps and dreamt that the next closest woman had passed her. Although Hughes was still in first that night, her lead had shrunk.

By morning, Hughes was only two miles ahead of the next woman. “Really that was all I needed to motivate me,” said Hughes, who proceeded to run a nine-minute mile pace for 18 miles, gaining eight miles on the woman behind her. At the 140-mile mark, Hughes said she was “running on a high.” She gained another 20 miles on the next female runner and improved her position in the race from 19th overall to fourth, passing several men during that stint. The second night proved technically difficult, but Hughes had mostly curbed her exhaustion.

After an easy-going first day and night, Sandoval, who had planned not to sleep until the second night, felt like he was bushwhacking for most of the second day. The trail, which had diminished from dirt roads to faint singletrack, was sometimes difficult to follow. Although he said he was tired by the second night, he couldn’t sleep, even though he had planned for a 15-minute rest in the back of his crew’s car. Instead, he continued into the second night. The pack of runners had mostly spread out and Sandoval was alone with the dark trail.

For Sandoval, who never thought of himself as a runner until he began competing in ultra races, there is usually a part of every race when he asks himself, “Why am I out here?” But that question never surfaced during this year’s Moab 240.

“I wanted to see what I was capable of,” said Sandoval, who continuously surprised himself with the progress he was making throughout the race. Even Hughes, who battled exhaustion early on, said she ran a smooth second half of the race and preferred the 240-mile route to other shorter endurance races, like the Leadville Trail 100.

Hughes and Sandoval ran together for roughly 20 miles the second day. Although they didn’t know each other before entering the race, a familiar Leadville kinship formed between them. They hardly talked on the trail, said Sandoval, but they  motivated each other to keep moving. “It was really fun to share miles with a fellow Leadvillian,” said Hughes.

Although Hughes and Sandoval are currently recovering in Leadville, both athletes have already begun planning their next challenges. Hughes is registered to run the Cocodona 250, another multi-day race that will unfold on trails in Arizona in May. Sandoval has also scoped out the race, but said he’s not sure if he will register.

Until then, Hughes and Sandoval said they will continue to break down their most recent race, investigating where they could have been faster and celebrating sections where they triumphed. “It’s something like an addiction,” said Sandoval. “There’s always room for improvement.”