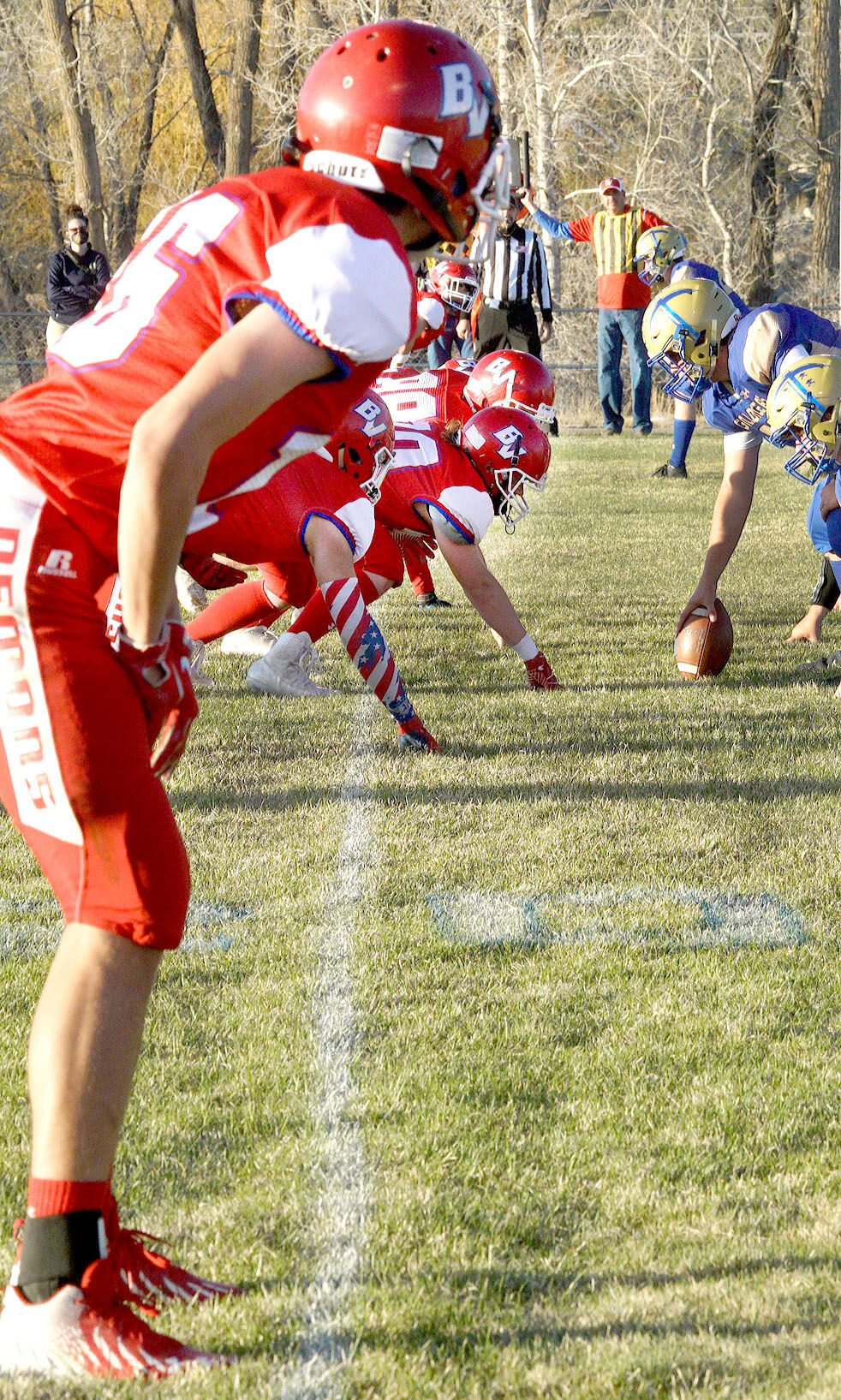 The Buena Vista defensive line prepares to feast on another Clear Creek offensive play Friday in BV. The Demons will face quite a different Manitou Springs team than the one the Demons beat 42-6 in spring football’s week 1. 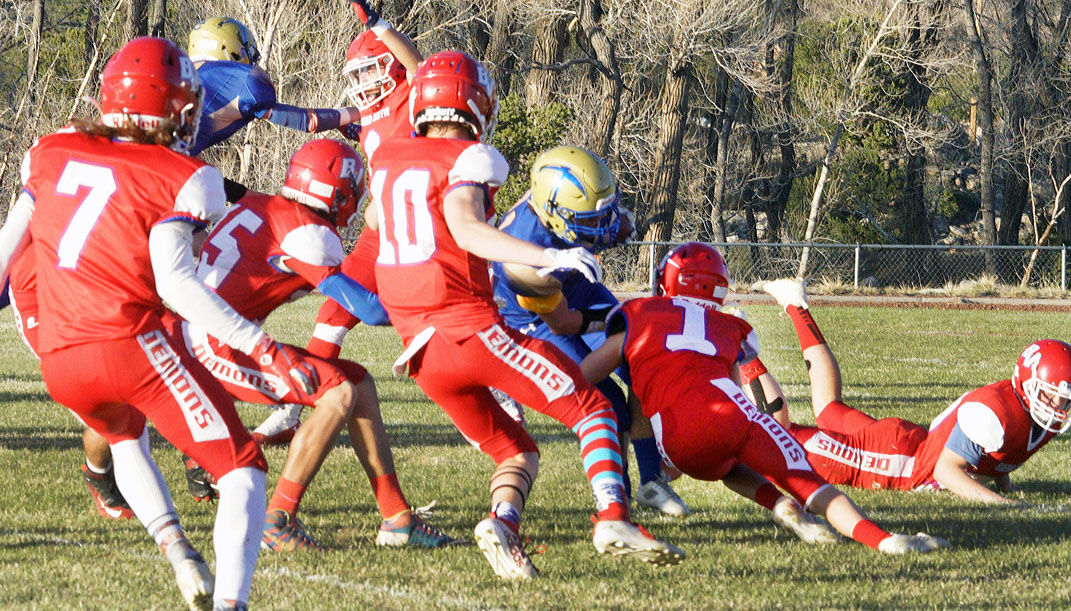 Buena Vista quarterback Haden Camp (11) scores untouched from the Clear Creek 5 for a 21-0 lead with 4:51 left in the opening quarter. 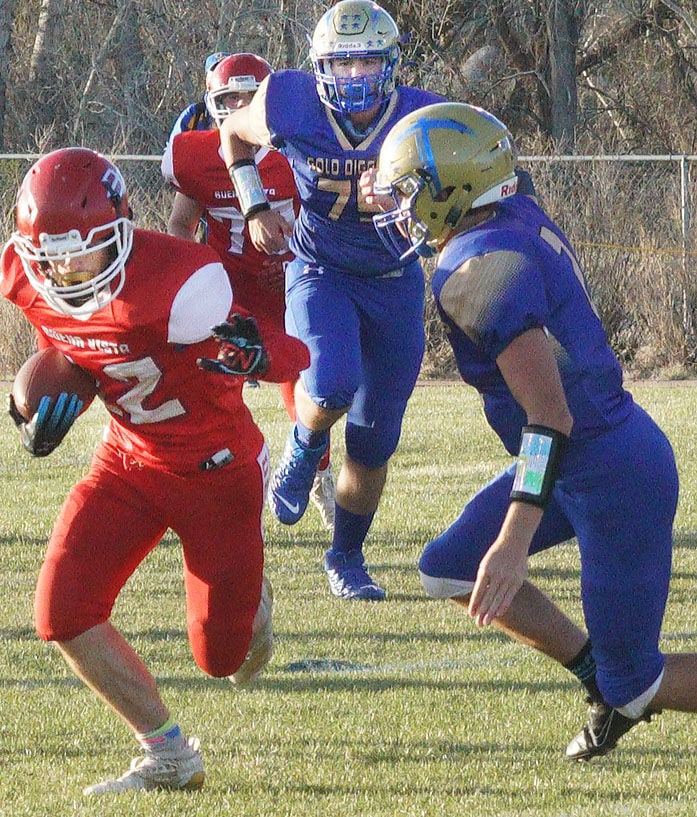 Buena Vista’s James Garrison runs with the ball after pulling in a pass for the Demons.

The Buena Vista defensive line prepares to feast on another Clear Creek offensive play Friday in BV. The Demons will face quite a different Manitou Springs team than the one the Demons beat 42-6 in spring football’s week 1.

Buena Vista quarterback Haden Camp (11) scores untouched from the Clear Creek 5 for a 21-0 lead with 4:51 left in the opening quarter.

Buena Vista’s James Garrison runs with the ball after pulling in a pass for the Demons.

Demons quarterback Haden Camp could’ve given the Buena Vista backfield – but not the offensive line – the night off Friday as Class 2A spring football playoffs opened.

En route to a 49-0 drubbing of Clear Creek, Camp had a direct hand – and feet – in the Demons’ first five touchdowns, which spanned just the first quarter plus 10 seconds.

In order, Camp ran for 84 yards, passed for 54, ran in from the 5 and then ran 57 yards before opening the second quarter with a 67-yard scoring strike.

“Those were called plays. He was lucky enough to break those runs. Our offensive line didn’t let anyone touch him,” Buena Vista coach Matt Flavin said. “He made some really good moves; nice to have a quarterback who can run, too.”

Camp’s 84-yard run down the field in the game’s opening minute started the scoring.

Camp also picked out paths that were opened up in front of him.

“Our receivers had a number of good blocks downfield,” Flavin said, noting Isaac Bearss block inside the Golddigger 20 on Camp’s 54-yard play-action TD pass to Jacob Phelps that gave the Demons a 14-0 lead 3 minutes into the game.

“His block was one of the most difficult to do in the open field and not get called for holding,” Flavin said.

Buena Vista’s early knockout punches the second time around against winless Clear Creek had the continuous clock mercy rule kicked in with 10:25 still left in the second quarter after Tate Nash thundered through a big hole in the right side for a 42-0 lead

“Our defense has just been solid all year,” Flavin said. “We’ve kept everything in front of us and been really consistent.”

The blowout victory allowed coaches to work in the subs along side starters through the rest of the second quarter. The second half saw every player suited up on the sidelines earning playoff football experience.

“It was good to see and test all the effort and work ethic they’ve put in all season through cancellations and just playing two games,” Flavin said.

The subs also got to feel lightning strikes as Chris Deluca busted loose up the middle for a long run to the Clear Creek 16 before Caleb Camp found Orion Herrie for a touchdown pass.

No. 1-seeded Buena Vista hosts fourth-seeded Manitou Springs Friday at 7 p.m. The Demons have outscored their opponents 264-31 including a 43-6 road win at Manitou Springs March 19.

The Mustangs were without eight players delayed by the basketball season the first time around.

Key among them is 6-foot-7 Jola Armour, who’s averaged 30 yards a catch with 3 touchdowns in two games. He has 237 of the team’s 352 varsity receiving yards.

“Their running game scares me more than anything,” Flavin said. “We’re going to need to rally to the ball well or it might be a long game.”

The Mustangs offensive line has produced 5.1 yards over 82 attempts this season while pass protection has produced 18.9 yards an attempt and 7 TDs.

The Demons have averaged 7.3 yards and 19 touchdowns over 180 rushing attempts and 16.1 yards and 9 TDs through the air.

The difference will be the same for the semifinal playoff game as it was Week 1.

“It’ll come down to blocking and tackling and taking care of the ball. Whichever team does that better will win,” Flavin said.