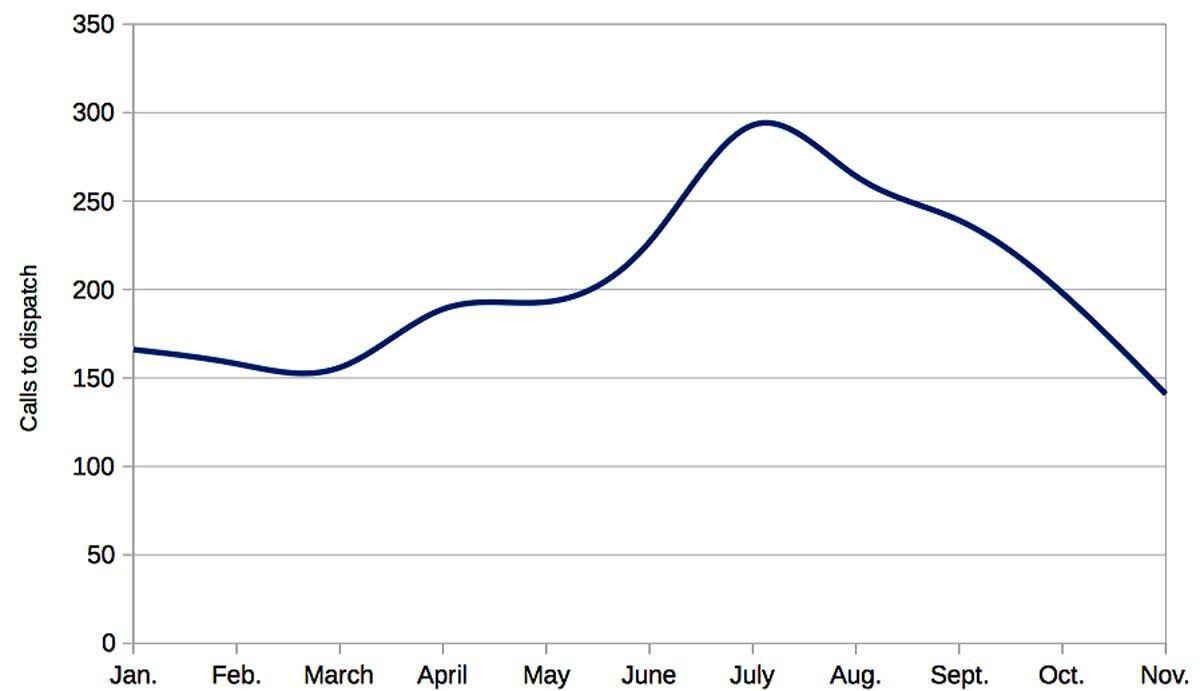 This chart shows call volume to BVPD dispatch throughout 2021.

A chart showing the categories of the majority of calls to BVPD dispatch in 11 months of 2021.

This chart shows call volume to BVPD dispatch throughout 2021.

A chart showing the categories of the majority of calls to BVPD dispatch in 11 months of 2021.

Policing in Buena Vista went out with a bang in 2021 (figuratively – no shots fired), including a reported stolen vehicle pursuit on Christmas Eve, said chief of police Dean Morgan.

“There was a lot of activity. In about a 2-week period, we had 24 just case reports. That’s on top of all the calls we had,” he said.

The vehicle pursuit was taken up first by the county sheriff’s office just north of Noah’s Ark on U.S. 285, about 6 miles south of town. The sheriff’s department terminated the pursuit due to icy conditions, after which a BVPD officer spotted the vehicle coming into town northbound on U.S. 24.

BVPD officers also opted not to pursue due to conditions, said Morgan.

The driver of the stolen vehicle had some apparent problems with the conditions also, colliding with a yield sign and eventually hitting a fence on Park Lane, where the joyride ended.

“The person was taken into custody by the sheriff’s office,” said Morgan. “All the officers did a really good job keeping the public safe.”

He said he was proud of his officers for being out on Christmas Eve, doing their duty.

The chief presented police activity statistics for January through November at 2021’s final board of trustees meeting last month.

The stats showed that the calls coming in to BVPD from dispatch are quite varied, not falling neatly into categories. The greatest number of calls recorded in the stats table was for 911 Miscellaneous.

Traffic-related calls are broken into several categories, which in the aggregate comprised the greatest number of police calls of any category in 2021.

“People asked – we listened,” he said. “On citations last year (in 2020) we had about 340 citations and this year we had over 700. A lot of that was responsive to citizen complaints.”

Morgan said the category breakdowns of calls coming into dispatch are less revealing than the total call volume per month.

Those figures showed calls rising steadily from spring into the busy summer months, peaking in July and declining through the fall and winter.

The stats on the table also leave out details that Morgan said he thought were far more interesting.

A burglary call, for instance, might lead an officer into a situation where a suspect reaches for a gun and the officer is forced to decide whether to shoot or not, a “shoot-don’t shoot,” situation, Morgan explained.

“One of our officers got in three don’t-shoot situations in about a 2-week period,” he said.

The department had been understaffed for 2 years following the retirement of longtime Chief Jimmy Tidwell.

Some officers had to quarantine due to COVID exposure or infection as well, exacerbating staffing issues.

The department became fully staffed as of Dec. 23, 2021, when two new officers graduated academy and started active duty. They will be sworn in at the next town board of trustees meeting Jan. 11.

2021 also saw the town’s transition from the BV Fire Department to the Chaffee County Fire Protection District. Morgan said the change was smooth from the police department’s perspective.

Police and fire coordinate on things such as school safety trainings and special event planning. Police also respond to many fire-related incidents.

“Overall the relations are very similar as far as responses. Working with Chaffee Fire has been great. They’ve been to a lot of our meetings,” he said. “We’re doing a lot of cross training and communication which is good. It was that way with BV Fire too.”

Can the newspaper clarify the comment: “People asked – we listened,” he said. “On citations last year (in 2020) we had about 340 citations and this year we had over 700. A lot of that was responsive to citizen complaints.” Does this mean the citizens called for each citation? Or does it mean a more general sense? As in, people were requesting that there be more traffic citations in general?