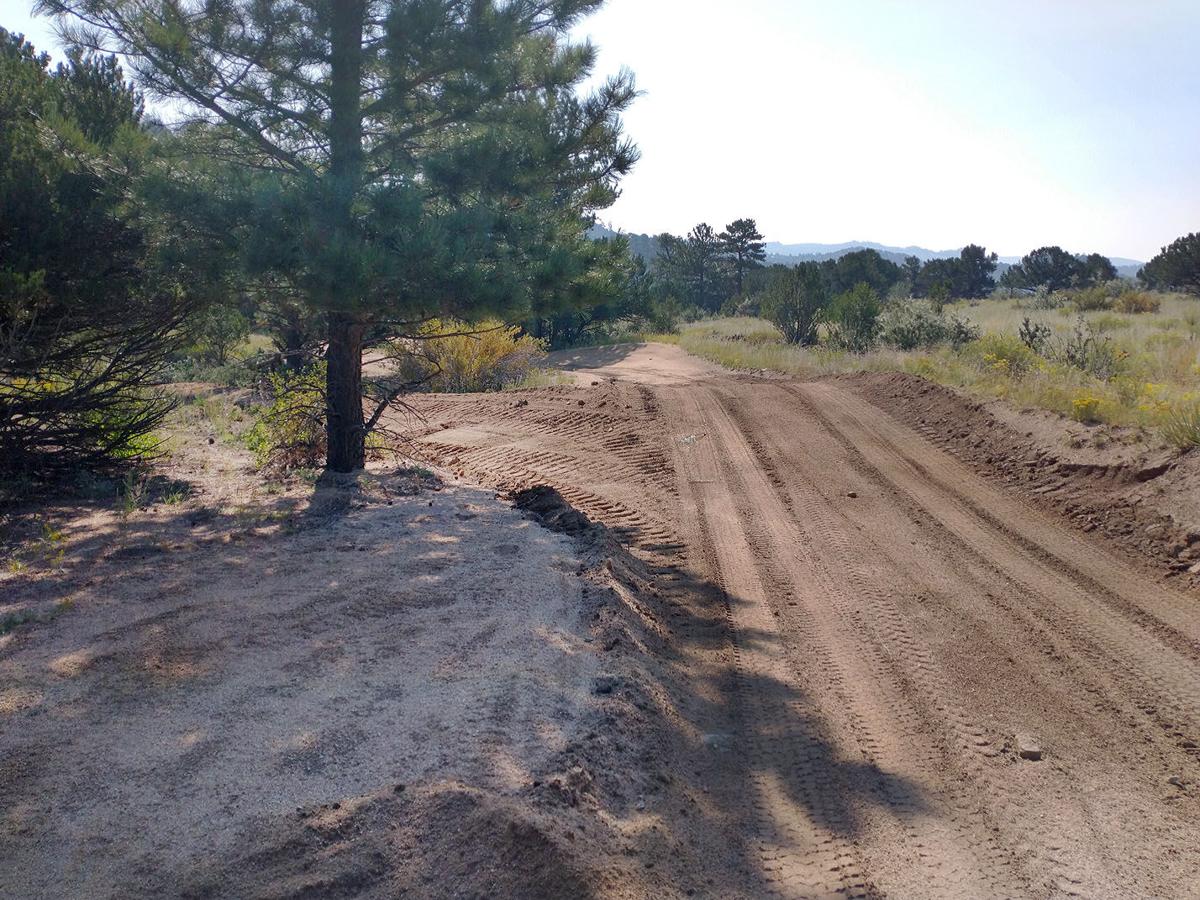 Roads in the Fourmile Travel Management Area were graded earlier this month. Much of the grading in Fourmile North and beyond involves channeling storm overflow to prevent gullying on roads. 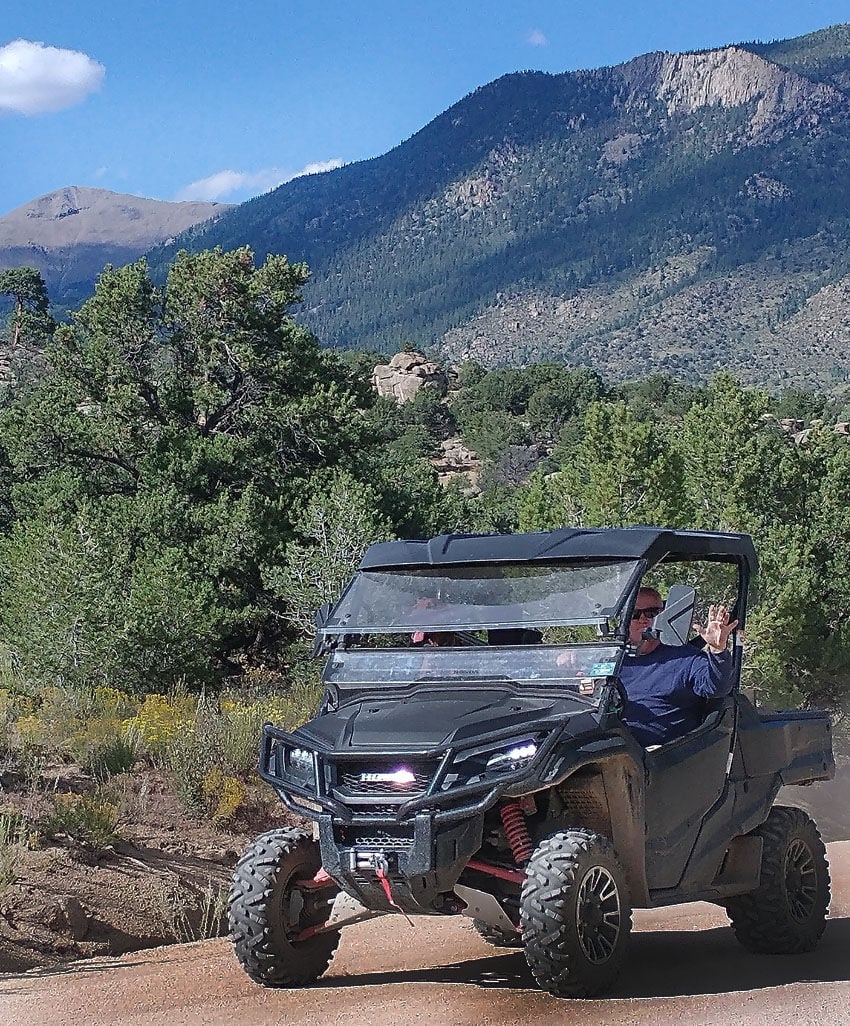 Jim Kellar of Murphy, N.C., gives a wave from his UTV on CR 375 in Fourmile Monday afternoon. Kellar’s passenger is Nash, a red bone coonhound adopted from Nashville, Tenn. Kellar, spending his fourth summer here, was scouting roads and dispersed camping sites for his motor home. 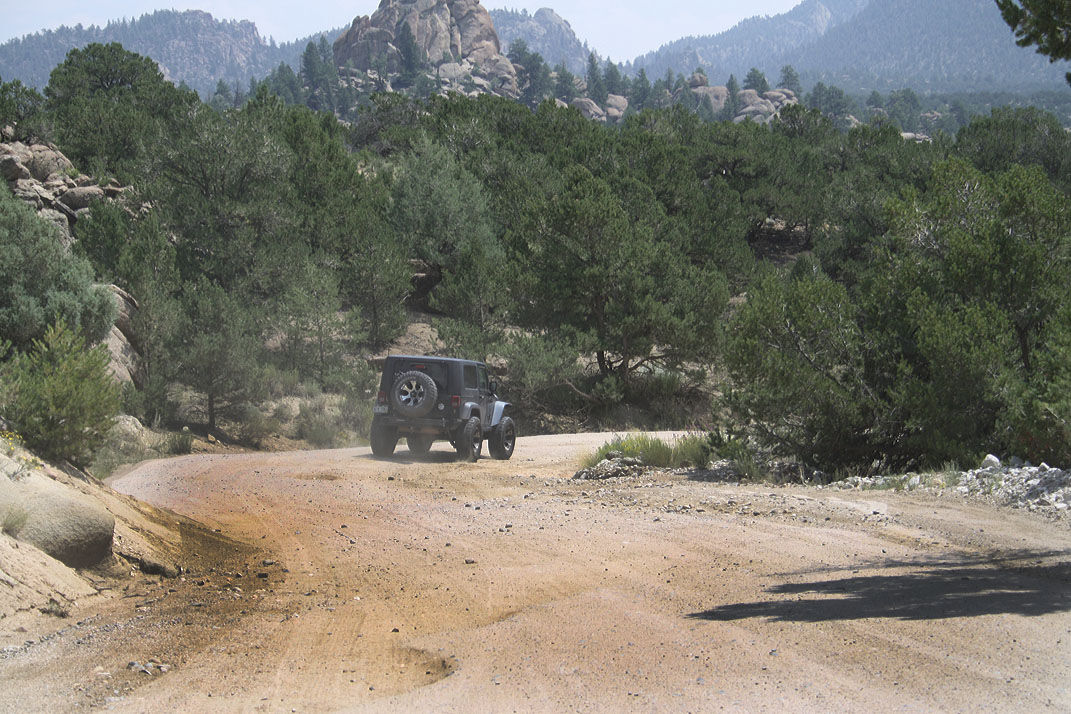 A jeep cruises down a freshly bladed CR 375 northwest of Buena Vista in the Fourmile Recreation Management Area. 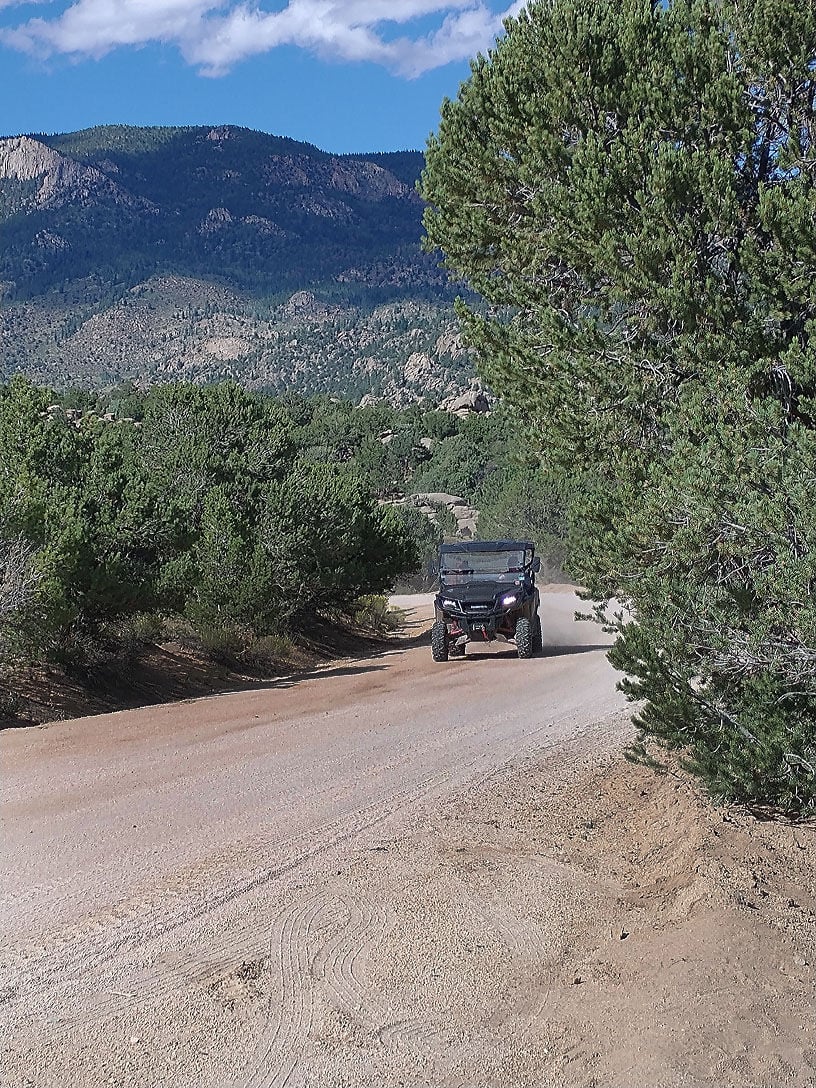 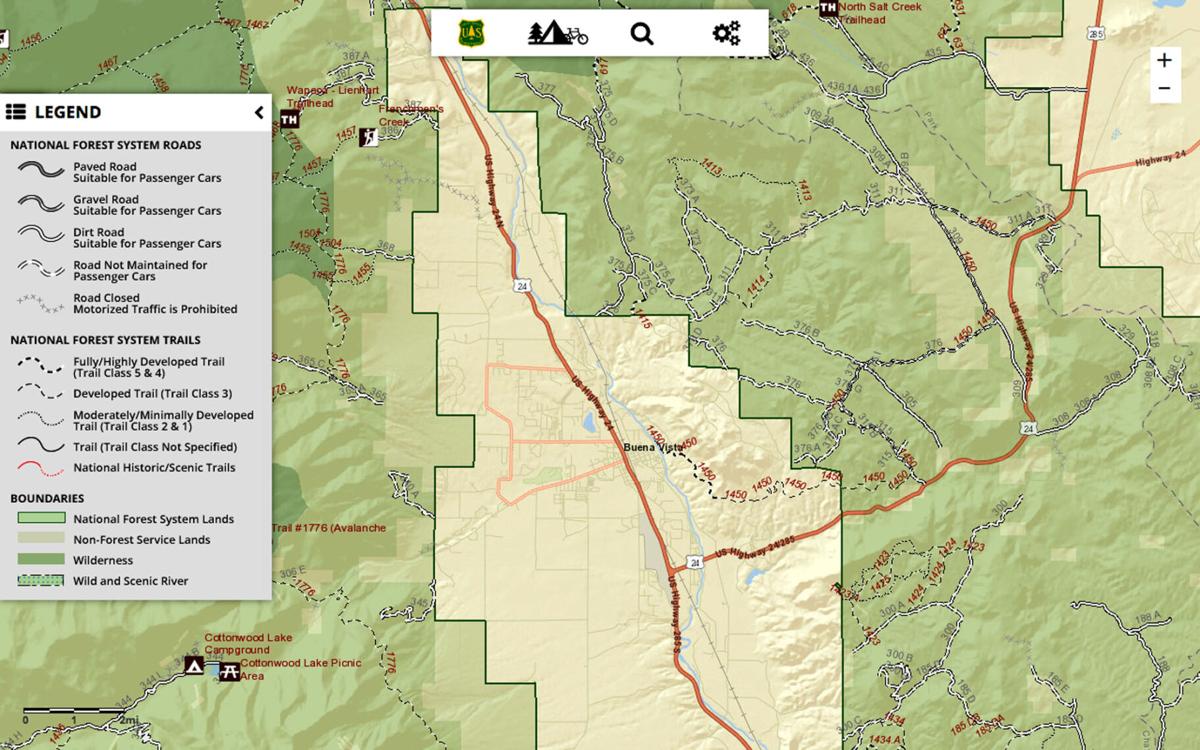 Roads in the Fourmile Travel Management Area were graded earlier this month. Much of the grading in Fourmile North and beyond involves channeling storm overflow to prevent gullying on roads.

Jim Kellar of Murphy, N.C., gives a wave from his UTV on CR 375 in Fourmile Monday afternoon. Kellar’s passenger is Nash, a red bone coonhound adopted from Nashville, Tenn. Kellar, spending his fourth summer here, was scouting roads and dispersed camping sites for his motor home.

A jeep cruises down a freshly bladed CR 375 northwest of Buena Vista in the Fourmile Recreation Management Area.

Indicators from town sales tax revenues to the Friends of Fourmile annual Memorial Day survey report confirm the impression one gets cruising around Buena Vista — outdoor recreation tourism is way up. How are roads holding up to the increased use?

Chaffee County Road and Bridge monitor and maintain many of the roads leading to popular outdoor recreation areas.

“Chaffee County has experienced a large amount of growth both with tourism as well as residence,” he said. “Recreation is a significant factor to maintenance costs and challenges. More and more rafting buses are making trips on gravel roads, as well as huge amounts of tourist traffic doing a multitude of activities in the county.”

He said that all-terrain vehicles and utility-task vehicles do significant damage to gravel roads, which is why operating such vehicles on most roads in the county and state is illegal.

“We could put a motor grader on CR 375 and 371 all summer long and still not keep up,” he said, referring to roads accessing the northern end of the expansive Fourmile Travel Management Area minutes northeast of town.

In this particular travel hot spot, due to weather and traffic this summer dust control products disappear and potholes reappear in a matter of weeks or even days.

Stacy said that increased visitation is not isolated to Fourmile.

The increased traffic poses challenges because roads in Chaffee County were not necessarily designed with this amount of traffic in mind, and the department dedicated to maintaining them is limited in its ability to expand.

“Most of our roads are rural mountain roads not designed for tens of thousands of vehicles in a summer season (for example, CR 306 at town limits has an average daily traffic of 4,000 vehicles, 1,500 vehicles daily at the top),” said Stacy.

He said that his department receives its funding mostly from a flat tax on fuel that is determined by CDOT, and a lesser amount from property taxes.

“Road and Bridge cannot pull from general fund, it’s against Tabor Laws. I do not see an increase in either personnel or budget in the near future,” he said. “This department maintains over 370 lane miles of gravel roads and 360 lane miles of paved roads. We do this work with 14 employees.”

“It’s hard for me to measure because I’m looking at it from a completely different lens,” he said.

In town limits, recreation visitors are primarily drawn to the Arkansas River for activities like kayaking and paddleboarding.

The Buena Vista River Park “definitely gets beat up pretty hard by visitors,” he said. “It’s never in the shape that I would want it to be in.”

“The roads that we have in place to handle our visitors seem to be doing pretty good,” he said.

Outside town, as county roads penetrate deeper into the backcountry they transition to roads managed by the U.S. Forest Service and a few by the Bureau of Land Management.

BLM lands in northern Chaffee County mostly follow the course of the Arkansas. The agency oversees approximately 20 percent of the Fourmile area.

“Due to the heavy rainfall this summer, we have seen more road damage to BLM roads from erosion due water flow, which added to the road maintenance needs,” he said.

Porter said that BLM concerns in northern Chaffee County centered more on toilet facilities, which are straining under increased usage.

For road and trail maintenance the BLM accepts help from both the county and other organizations.

“We do have strong relationships with several friends groups who help with volunteer work days to improve and repair trails, install fencing, and rehabilitate areas that have been impacted by increases in use,” said Porter. “These groups, like Buena Vista Singletrack Coalition and Friends of Fourmile as well as others have helped keep trails in good shape.”

The Forest Service manages the majority of the lands around Chaffee County, which contain roads that spider through both Fourmile and the San Isabel National Forest, east and west of town respectively.

Angela Krall is acting director for the Salida Ranger District of the USFS. Former director Jim Pitts has been promoted and relocated to Pueblo.

“We’re seeing this everywhere, this increase in motorized use. I normally work in New Mexico and we’re seeing it there, too,” said Krall.

She said that, like the BLM, the USFS relies on cooperation and partnerships with respect to road maintenance.

“We have a small road crew for a million-plus acres and it’s tough to cover it all. So that’s why we often go into road maintenance agreements with counties and locals,” she said.

“Generally speaking, we get cooperating agreements together, where a road goes through several jurisdictions,” Krall said.

The main factors that affect road maintenance decisions in the Forest Service’s framework are road type, geography, topography and use. The agency classifies roads by five maintenance levels:

• Maintenance level 1 roads are closed to motor vehicle use.

• Levels 3, 4, and 5 are maintained for passage by standard passenger cars during the normal season of use.

She said that how people operate their vehicles on gravel and dirt roads makes a difference.

“Decomposed granite surfaces are hard to maintain and the different types of motorized use have different impacts,” she said. “Vehicle speed plays a large part of this, as well as drivers who avoid drainage features because they’d rather maintain their speed.”

Impacts and increased maintenance requirements due to recreational tourism is not on the Forest Service’s radar.

“We’re getting a lot of impacts to trails from the burn scar. But talking about increased motorized use, no,” said Krall. “I will say that is some great data and we so need our partner groups. Hats off to Friends of Fourmile. We need that data but we just don’t have the kind of bandwidth to monitor.”

Krall also said the Forest Service will soon release a camping management plan for the Leadville and Salida ranger districts to control the recently observed expansion of dispersed camp sites.

“It is a statewide concern on forest lands,” she said. “We have this incredible creep going on.”

Shop owners who rent off-highway vehicles have experienced a business boom but have not noticed significant impacts on road conditions.

“Last year it just blew up huge for us. Just because of COVID, everybody was trying to get out,” said Darren Smith, co-owner of BV Jeeps.

Smith has been renting OHVs to visitors for about 5 years.

“I don’t know about the roads. They were rough when I first came out here,” he said. “Most of my customers are kind of looking for that anyway.

“As far as the county roads, they are rough. I’ve never dug into it but I assume they’ve got a lot to keep up with,” said Smith.

He said that his rental equipment was unmodified, lacking the big, knobby tires and souped up engines favored by many dedicated hobbyists.

Smith instructs all his customers to observe speed limits and advises them where to find less-trafficked roads.

“The more you can spread people out, the better and longer the trails are going to last,” said Craig Anderson, owner of Salida’s Anderson Motors. “I can get these people in the right places, teach them the right ways to use the areas.”

Smith and Anderson both said they expected visitor numbers to decrease when the pandemic comes to an end.

They also both said that active stewardship by local residents is important, especially in helping visitors understand respectful and appropriate use of the county’s recreation areas.