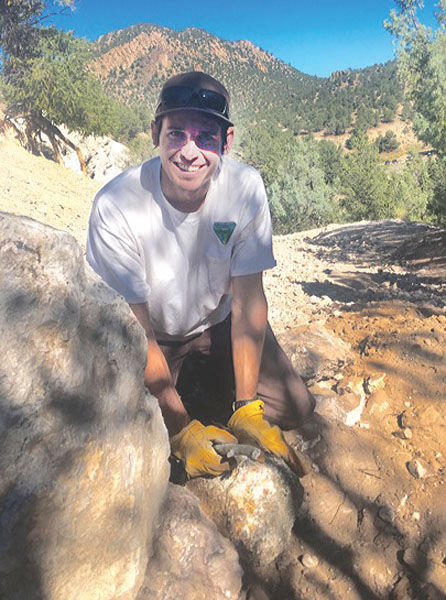 Bryce Hofmann, BLM park ranger from the Royal Gorge Field Office, works on putting rocks in place along the trail. 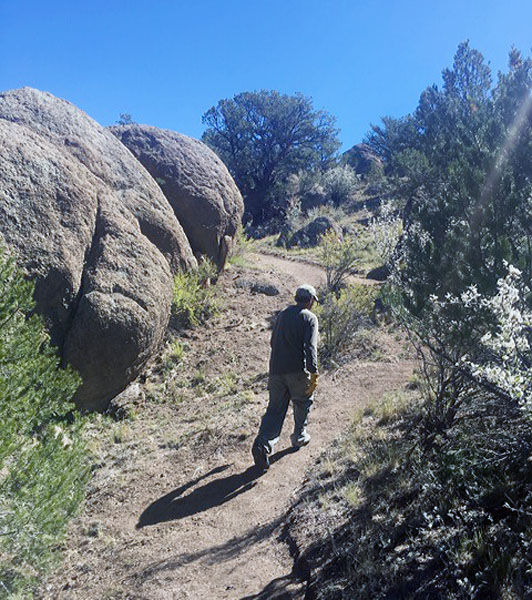 Friends of Brown Canyon board member Michael Kunkle walks the Southwest Conservation Corps reroute, which is 1.25 miles in length and at the top of the hill from Saturday’s trail work. It should be complete this fall. 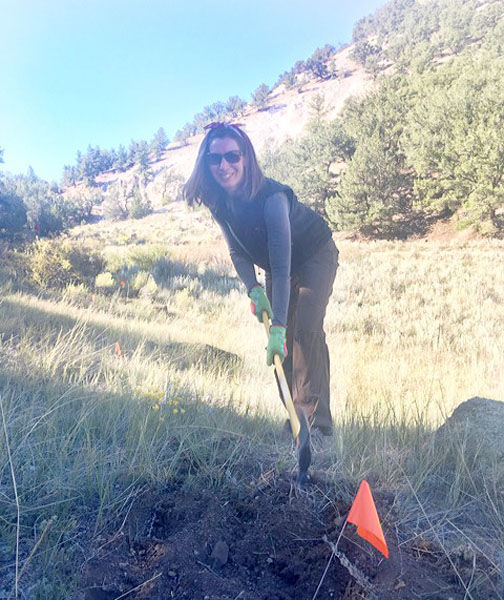 Bryce Hofmann, BLM park ranger from the Royal Gorge Field Office, works on putting rocks in place along the trail.

Friends of Brown Canyon board member Michael Kunkle walks the Southwest Conservation Corps reroute, which is 1.25 miles in length and at the top of the hill from Saturday’s trail work. It should be complete this fall.

Around 25 volunteers completed a 500-700 foot reroute from the current Ruby Mountain Parking Area to the existing Turret Trail at the entrance to Browns Canyon National Monument.

The goal of the re-route was to move the trail off of private land and to prepare for an upcoming parking lot renovation. The new trailhead will soon be at the southeast corner of the existing parking area.

Volunteers also worked to prevent further washout along the first steep ascent on the trail. Crews built rock bars to divert water off the trail and stabilized existing drainages to slow erosion. The plan was to create a more sustainable trail and increase stability for horseback users.

This trail work is complimentary to a project currently underway by Southwest Conservation Corps. The SCC reroute is also moving trail from private property and making the trail more scenic, explained Friends of Browns Canyon board member Michael Kunkle. That 1 1/4-mile reroute is planned for completion this fall.

Cora Whisenhunt and Bryce Hofmann from the BLM’s Royal Gorge field office led the workday from the land manager’s side. Kunkle, executive director Keith Baker and board president Beverly Kaiser, represented Friends of Browns Canyon. The day’s objectives were completed by lunchtime, a few hours ahead of schedule.

Kaiser spoke of what’s upcoming for Friends of Browns Canyon. Their fundraiser will take place Friday, Oct. 14 at Salida High School. Clay Jenkinson of NPR’s “The Jefferson Hour,” will headline the event as Theodore Roosevelt. Tickets are $30 and doors open at 7 p.m.

FOBC will soon begin aiding the Forest Service, BLM and Arkansas Headwaters Recreation Area in completing the Resource Management Plan for the monument.

“We want to pull together citizen involvement,” said Kaiser, “to give our two cents on how the monument should be managed.”

Right now there is no draft plan, but public comment is expected to begin within the next several months. The RMP is estimated to take 3 years to complete.

Baker said the next major project for FOBC will be the expansion of a parking area near Turret to accommodate horse trailers.

“Major projects are expected as an outgrowth of the RMP,” he said.

Friends of Browns Canyon’s unspecific mission is supporting the public lands agencies in increasing accessing to the monument. He explained the goal is not necessarily to increase the number of users, but “increase the quality of experience.”

Carla Rogers from the BLM’s national operations center in Denver joined the workday as well. She said she came out to enjoy the beautiful day and contribute to the monument.

At lunch she explained the Resource Management Plan’s public commenting process, and that it would probably run from November to January.

She reiterated that the RMP would probably take 3 years to bring the BLM, Forest Service, and Colorado Parks and Wildlife to a cohesive plan.

Anyone interested in staying informed on public commenting information can email blm_co_brownscanyon@blm.gov.