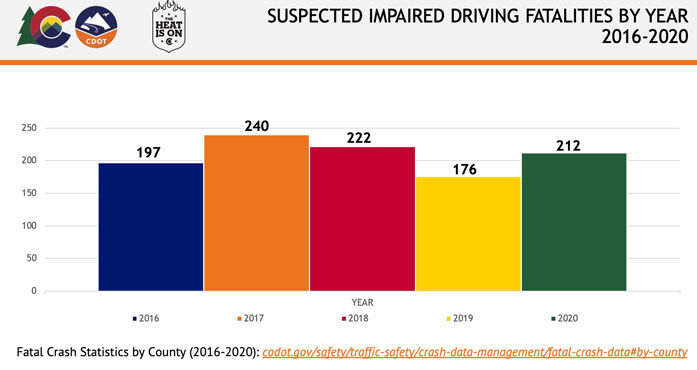 Summer will soon come to a close, but driving impaired is never in season. The Colorado Department of Transportation, Colorado State Patrol and local law enforcement agencies including Buena Vista, Salida and the Chaffee County Sheriff’s Office are coming together for a late summer DUI campaign from Aug. 18 to Sept. 6.

Additional patrols will be stationed statewide to remove impaired drivers from the roads ahead of and during the Labor Day holiday weekend.

“We are aware that late summer is a chance for people to enjoy summer activities before fall arrives later in September,” said Col. Matthew Packard, Chief of the CSP. “Unfortunately, we see a spike in impaired driving fatal crashes during the summer. These occasions can easily end with a fatal crash due to the careless and entirely preventable decision to drive impaired. Please hold your loved ones accountable to help keep our roads a safe place to travel.”

There were 622 traffic fatalities overall.

Local law enforcement agency plans and arrest results across the state can be found at www.codot.gov/safety/traffic-safety-reporting-portal

“Choosing when to get behind the wheel can be a life or death decision,” said CDOT’s Office of Transportation Safety Director Darrell Lingk. “When alcohol or marijuana is present, there is always a choice to make, and the decision affects more people than just the driver. Please be mindful of the decision at hand to never drive impaired — lives depend on it.”

For yearly impaired-driving crash and fatality data in Colorado, visitcodot.gov/safety/traffic-safety/crash-data-management/fatal-crash-data. Information about DUI laws in Colorado can be found at NoDUIColorado.org

ABOUT THE HEAT IS ON