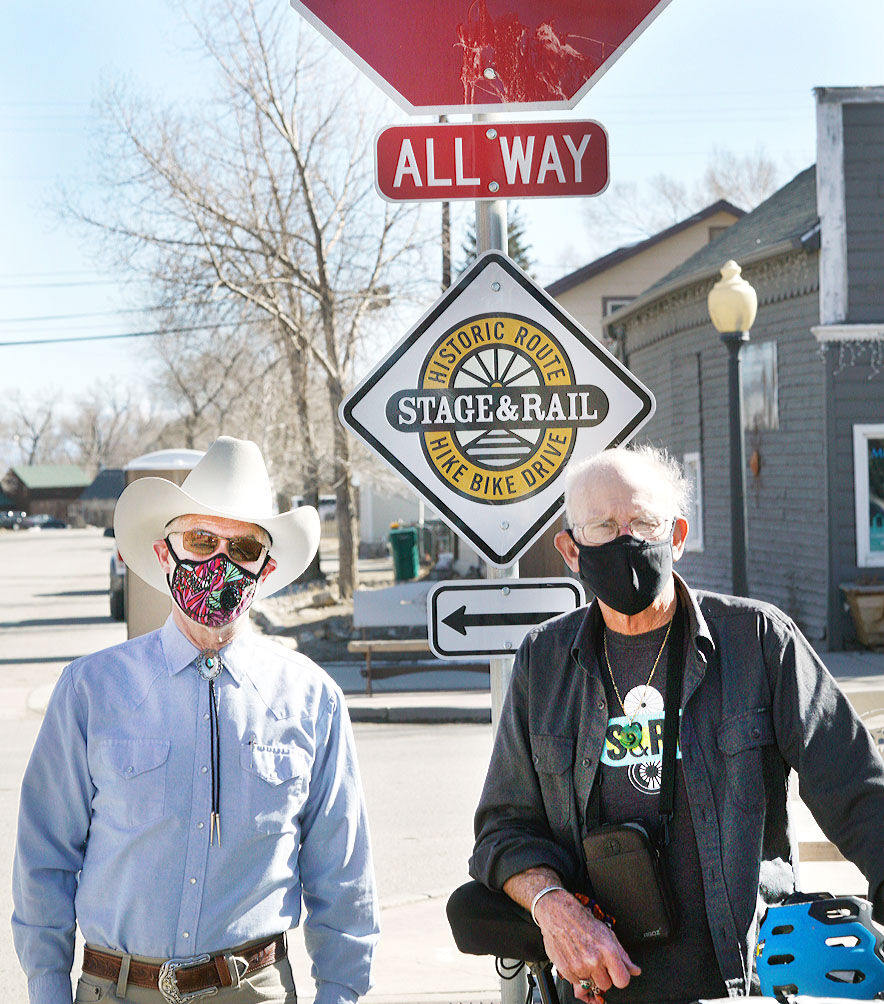 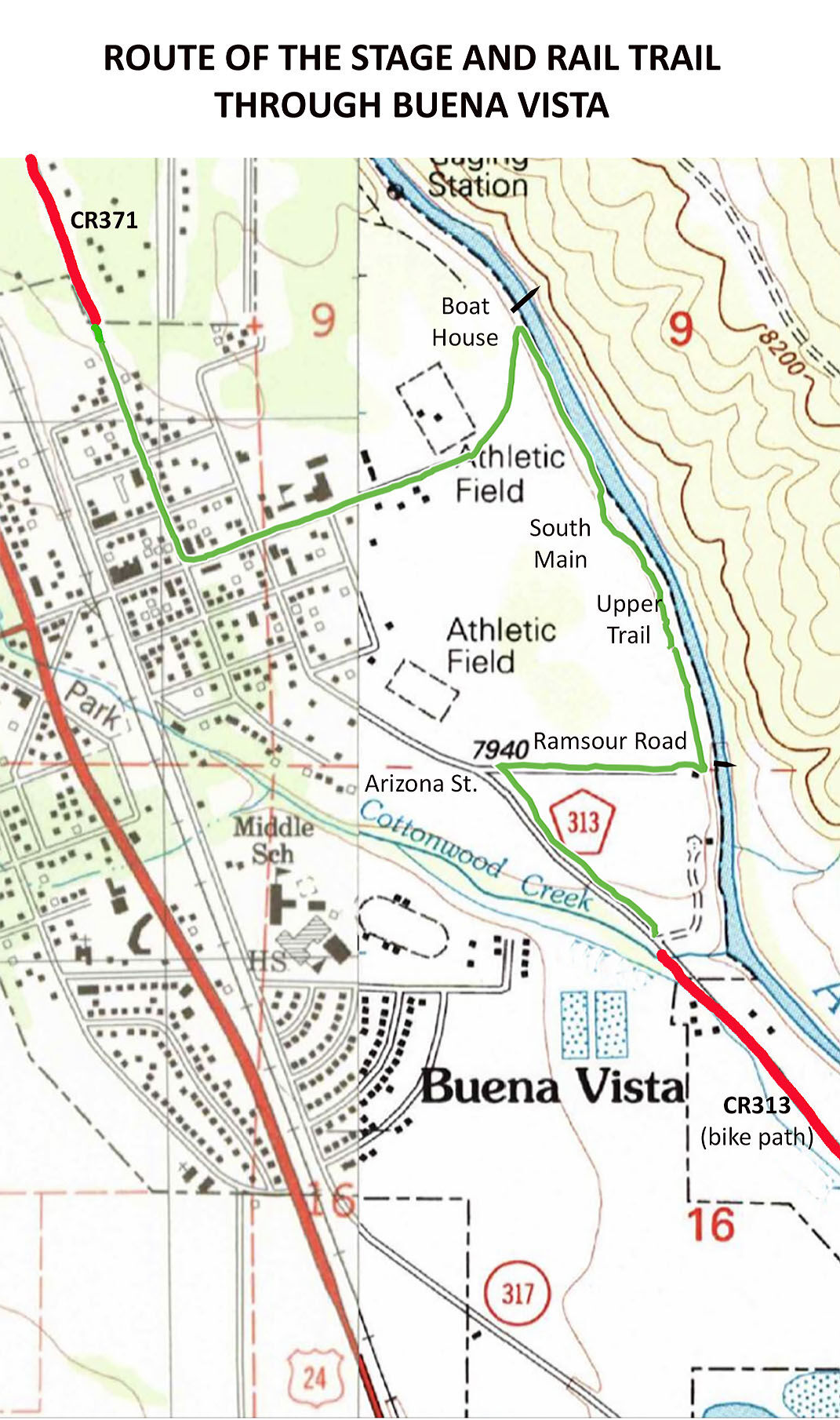 Signs officially marking the path of the Stage and Rail Trail, a planned 70-mile cycling trail that closely follows the rail line of the Denver & Rio Grande railroad between Salida and Leadville, were recently erected along CR 371, a big step in a very gradual process to create a long-distance cycling trail in Chaffee and Lake counties.

“We’re celebrating the end of about a 15-year-process of trying to develop an ambitious regional trail,” said Alan Robinson, the trail’s volunteer project advisor. “It’s a combination of driving on county roads and on state highways and trails through the towns where we can do it, and pieces of the Colorado Midland Railroad and the old Cañon City to Leadville stage road.”

The railroad from Cañon City to Leadville wasn’t built in a day. As it moved up the Arkansas River Valley from town to town, stagecoaches would pick up where the railroad left off to take travelers the rest of the way.

The S&RT wasn’t built in a day, either.

“It involves working with two counties, Lake County and Chaffee County; three towns, Salida, BV and Leadville; the BLM, the AHRA, the Forest Service, Private Lands and a piece of State Lands. It’s been a long time going,” Robinson said.

So far, 15 years going. Sponsored by the Greater Arkansas River Nature Association, a feasibility study based on an original concept developed by Robinson, Kathy McCoy, Bob Gray and others was finished in 2012, followed by a draft master plan in 2015.

In 2016, the putative trail was named as one of 16 long-distance trails by the Colorado the Beautiful Program as top priorities for development.

Since the completion of the master plan, project organizers have been working gradually to attain formal approval for each section of the long trail.

“We’re gradually chipping away,” Robinson said dryly. “There are a whole bunch of players involved, and not everybody is on the same page at the same time.

“We’ve gotten the county and Salida to be on the same page down there, we’ve got the county and the town of BV on the same page for this piece – this is something like 13 miles all the way from Otero Pump Station to Johnson Village – and it’s 9 miles from 285 through Salida. So we’ve got about 25 miles out of our 70 miles. We’re pretty close up in Lake County, we’re just waiting on an issue to get the trail under the highway safely.”

From 2017-2019 the project had grant funding from Colorado Parks and Wildlife to contract with the Colorado Mountain Club to coordinate implementation and to develop mapping, a website, posters, and self-guided smartphone app tours.

In 2019 the SRT project obtained grant funds to allow Chaffee County Road and Bridge to include a bike lane on CR 313 from BV south to Johnson Village when that county road was repaved.

In 2020, working with the Salida city council and the Buena Vista trustees as well as the Chaffee County Commissioners, permission was given to formally approve two important sections along the 70 mile route. These two sections have recently had official S&RT road signs installed.

One section in the south runs from U.S. 50 near Cleora north through Salida and west along county roads to U.S. 285 (about 9 miles). Another runs from Johnson Village north on CR 313 and through Buena Vista’s riverfront trails in South Main, along East Main Street and North Colorado Ave. to CR 371 and through the Tunnels to the Otero Pump Station Bridge (about 13 miles).

Chaffee County Commissioner Keith Baker, a supporter of the project since its conception in 2008, when he owned the Trailhead outdoor retailer in Buena Vista, called the trail “a big thing in commemorating our Western heritage.”

Robinson said that, when completed, Leadville won’t necessarily be the end of the road.

“You can, in theory, once this trail is complete, ride a bike all the way from Salida to Leadville, and then from Leadville, up and over Fremont Pass is another trail that’s in the process right now,” Robinson said. “You can keep going, go over Climax, Fremont Pass, down into the ski areas, then you join the trail system that’s along I-70, and you can take that trail system, certainly into Breckenridge.”

The Fremont Pass Recreational Pathway Project, itself a collaboration between two counties and several entities both public and private, roughly parallels State Highway 91 for over 21 miles between Leadville and Copper Mountain ski area.