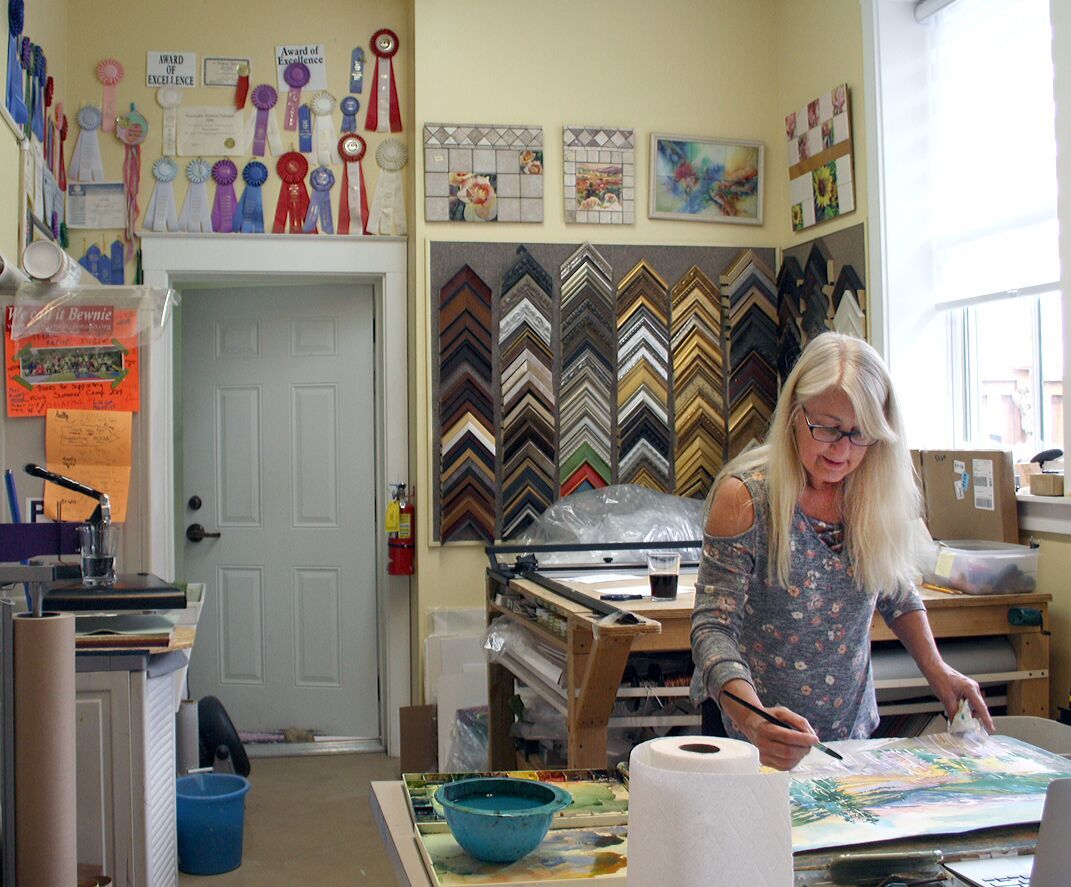 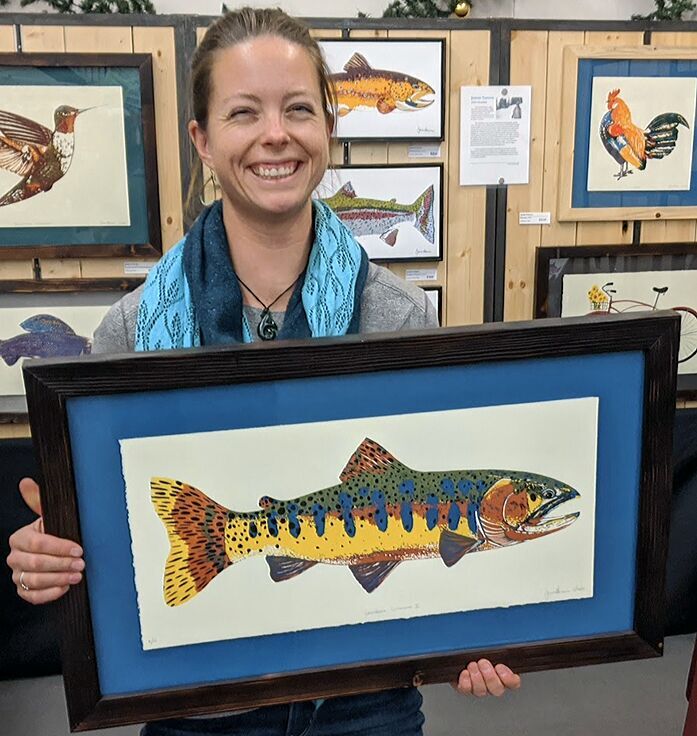 Jennie Noreen Omasta will take over as the new owner of Rock Run Gallery this fall. 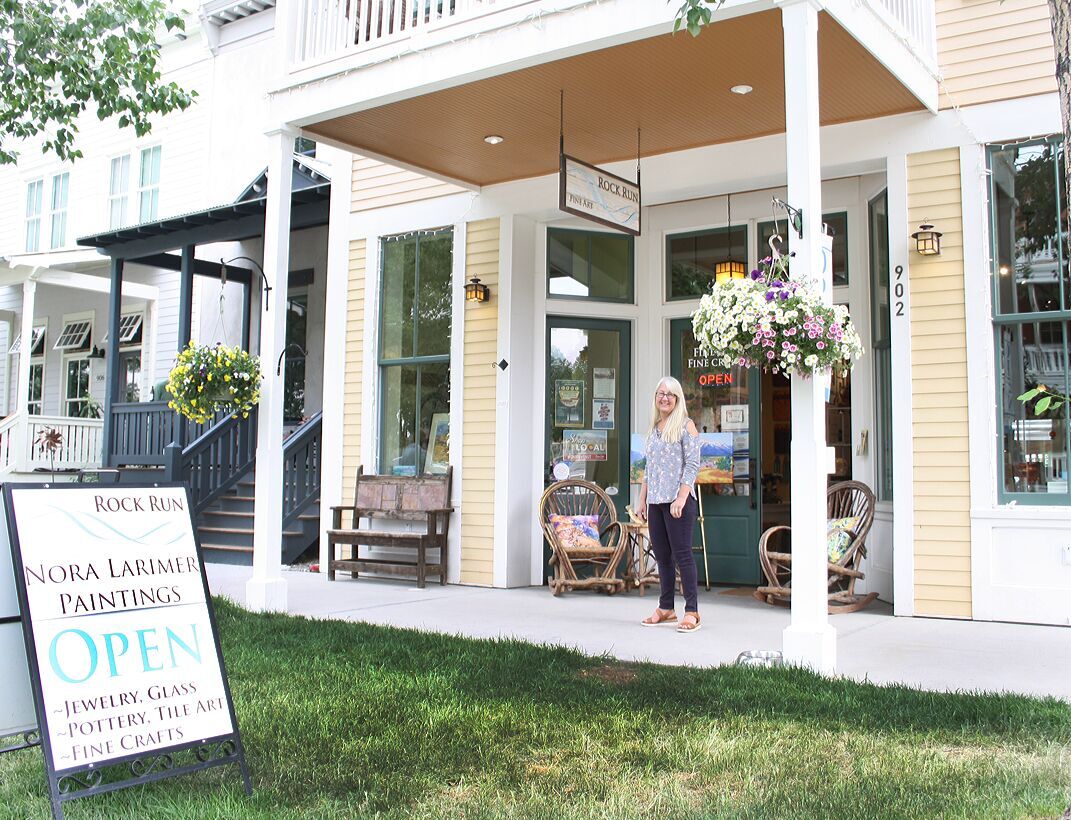 Jennie Noreen Omasta will take over as the new owner of Rock Run Gallery this fall.

The first business to have opened on South Main is changing hands this fall.

Nora Bushong Larimer and her husband, a former teacher and professional fly-fishing guide, built the structure at 902 South Main Street in 2008. Its three stories house their business, as well as their home and a studio above.

Realizing this dream was not easy. Working as a professional artist since 1976, Rock Run was conceived around 2005, said Larimer, when they decided to buy property in BV.

“Dave at what used to be Colorado East Bank—they believed in us enough that they gave us a loan that was a hybrid commercial and residential. The other banks just wouldn’t touch it,” said Larimer. “My husband’s a teacher. I’m an artist. So we didn’t have a lot of money.

“They told him to keep his job. So he kept his job in St. Louis and I came out and got this going for 3 years. He would come in the summers and during breaks. In the first 3 years that’s what we were doing, just to make ends meet,” she said.

“We were kind of a lone building right here.”

She recalled watching potential customers turn around where Main Street’s pavement used to end and turned to gravel surface until the entrance to the new development.

“This was paved here, but people didn’t look right, always. There was barely any signage. That was the biggest frustration. I have to say, though, that September 2008, when I opened, people started coming in. And they would say stuff like ‘Oh, this town needed you!’ And so I was really happy. I felt like it was the right thing all along. And we just watched it grow and grow.”

The neighborhood grew up along with the Larimers’ business, and she said it also helped to revitalize the old sections of Main Street.

“It was after us that Eddyline came in, and Sundance. Surf Chateau was 4 or 5 years ago. So that has helped a lot. Once we came to town and these nice buildings started going up, I feel like that brought more people. They were more interested in coming to Buena Vista and starting more businesses on the old part of Main Street.”

Her gallery’s moniker is a Pennsylvania-Colorado connection.

“The name comes from a favorite stream and fishing hole in Pennsylvania where my husband grew up, going to camp. But it’s perfect for here because there’s these rocks everywhere, and there’s River Run right over there,” she said.

“We’ve been here for almost 13 years now and it’s time to pass the reins, I think. It’s been hard to find the right person. You want somebody that can do all of it, like I do,”she said. “Somebody that can handle tools and do the framing and talk to customers. Somebody that enjoys talking to people and enjoys the artwork.”

That right person turned out to be Jennie Noreen Omasta, a Gunnison native who has called BV home for 4 years and worked in the gallery since September of last year.

An artist herself, Omasta has been working at Rock Run as Larimer’s assistant and has been doing much of the custom framing offered by the shop.

“I am so excited to carry on the legacy that is Rock Run Gallery. I know I have big shoes to fill, but I hope to keep a similar atmosphere throughout the gallery. If anyone can be a mentor in that department, it’s Nora,” she said.

Omasta studied printmaking at the University of Puget Sound in Washington state, and since then took up the unusual art form of silkscreen printing.

Her experience in business includes her own art career, which she has pursued professionally for the past 4 years, and prior to that running a water conservation education nonprofit with her husband.

She plans to continue to offer custom picture framing to the community, and is eager to offer art-based events such as artist talks and demonstrations.

“I’m really excited to work with the current artists that are in the gallery right now. I’ll be keeping a lot of those artists.

“I also over the years have made a lot of friends who do a lot of amazing things and are really talented. I’m excited to bring a little bit of a new vibe to the gallery,” she said.

Omasta said she is developing plans to increase community interest and engagement with local artists and promote more Buena Vistans to start creating their own art.

For the Larimers, retirement promises to be an active time. Preston will continue as a fly fishing guide for ArkAnglers and Nora plans to continue painting and spending more time in her studio space in their future new home in Buena Vista. Her paintings and tiles will still be available at Rock Run under Omasta’s ownership.

“I’ll keep painting — I’ll keep supplying the gallery,” said Larimer. “I have a feeling that she’ll need me to work a little bit here and there.”

Larimer also plans on enjoying the freedom to relax, go for hikes and spend time with family. The Larimers have two sons, Andy, a musician and audio technician, and Nathan, a fly-fishing guide and fine arts photographer.

They want to travel more frequently.