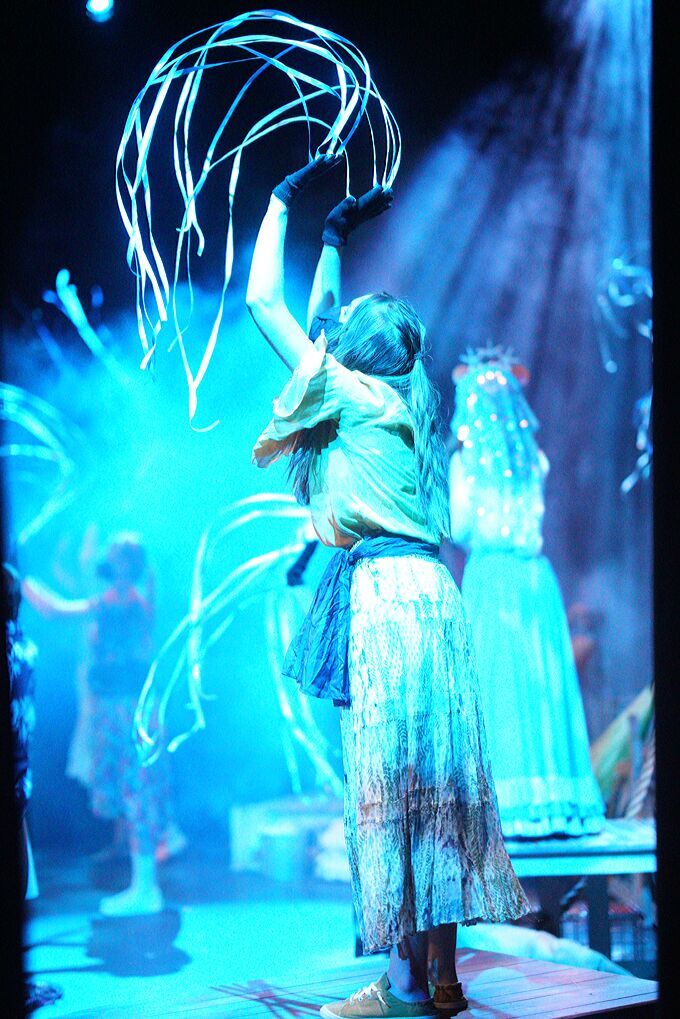 The production uses lighting and special effects to infuse the story with voodoo spirit. 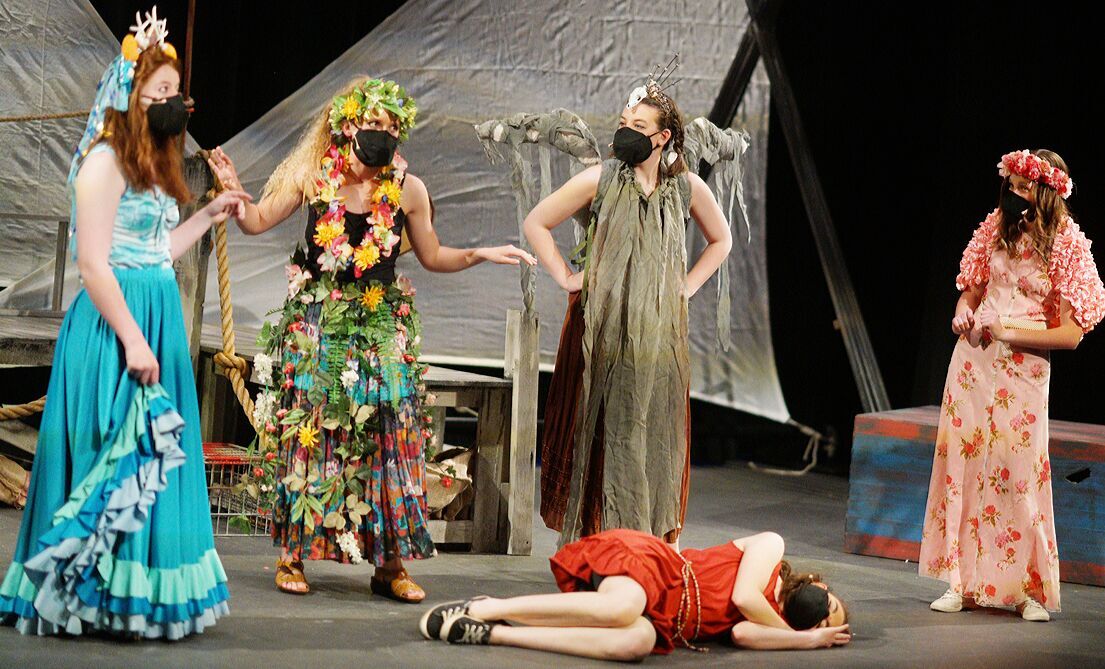 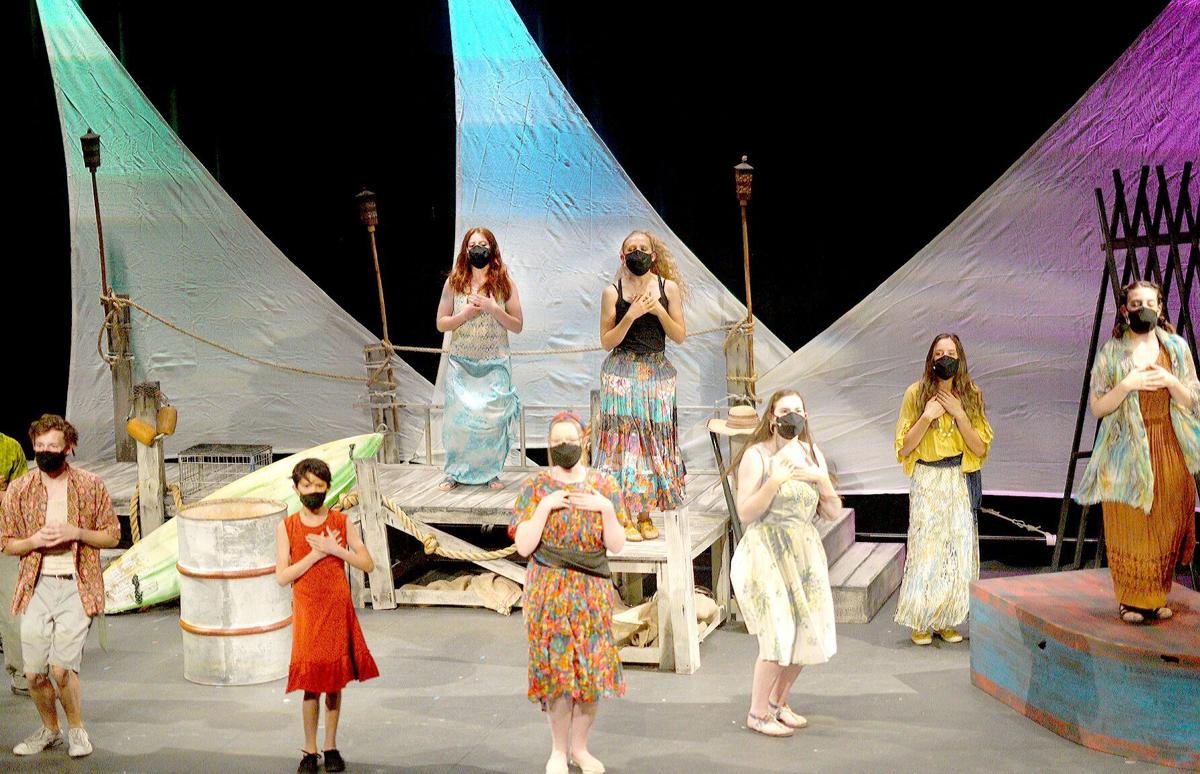 The cast of “Once on This Island” rehearses the Broadway musical’s opening number Monday in the new Flex Commons.

The production uses lighting and special effects to infuse the story with voodoo spirit.

The cast of “Once on This Island” rehearses the Broadway musical’s opening number Monday in the new Flex Commons.

Beginning this weekend, Buena Vista High School’s Trident Theatre Company debuts their first musical on the stage of the new flex commons: The mythical, tropical “Once on this Island.”

“It’s a really interesting story,” said director Tanner Oharah. The play by Lynn Ahrens and Stephen Flaherty, is set in Haiti and tells a story that is at once a realist portrayal of social stratification in the colonial Caribbean blended with the qualities of a fable with gods from the Voodoo tradition.

“You have all the cultural things that come from that, and then a lot of really abrasive relations between people on that island. That comes out in this story of the poor peasants and the really rich.”

Hannah Volpe plays Ti Moune, a peasant girl whose life is spared from a terrible storm by the gods.

“She doesn’t know why she was saved. She’s a very young teenager that wants to find out why she was spared and what her life’s purpose is,” Oharah said.

“The death god is Papa Ge, played by Lauryn Cunningham, another senior. Then Erzulie, the love god, is played by one of our freshmen, Chloe Puckett,” Oharah said. “There are other gods creating scenarios for these characters to walk through, like the water god, Agwé, is creating storms, and that’s played by Jaylynn Goode, she’s a freshman. Then we have the earth god, the mother earth character, Asaka. ‘Mama will provide’ is the big solo she sings, and she’s controlling the earth and putting people on their paths, and she’s played by Elena Dunn.”

The magical element gives the production the opportunity to “play with some of our special effects and try to flex our muscles with our new Flex Commons space and see what we can pull off in this new facility,” Oharah said.

“Along with musical numbers influenced by Caribbean music, it also means that “it deals with a lot of heavy topics like ‘is death stronger than love,’ but if you’re watching it from a little kids perspective, it’s like watching ‘The Little Mermaid.’ It’s a light-hearted, fun party musical.”

In fact, “Once on this Island” is in production as a film for Disney’s streaming service Disney+.

Of the Flex Commons, a feature of the school district’s new middle and high school, Oharah said “It’s a much higher quality lighting and sound system. It’s definitely going to feel a lot more like a theater.”

“It’s pretty awesome that we’re doing a musical this year. When we set out in January, when we weren’t sure if it was going to happen or how it would happen,” Oharah said. “It’s just been a process of taking risks and also being really cautious at the same time. It’s been a really exciting balance of getting to do stuff within the current restrictions and then figuring out how you’re going to make the magic of theater happen in between that.”

For one thing, the rehearsals were shorter and spread out over a longer period of time than usual.

“We had to take more time knowing that there would probably be some days when different people were quarantined. We had different people out for different lengths of time,” Oharah said. “They’ve had more time to do their own work, memorizing lines and scheduling their own rehearsals with each other. I think they’ve enjoyed that piece of it.”

Part of the appeal of “Once on this Island” was the relatively small size of its cast. “This one has a minimum size of 11, and a lot of minimum sizes are closer to 20.

“Narrowing that down, there’s a bunch of scripts still on the table and beginning to read and listen to them, this plot just stood out,” Oharah said. “There’s so much depth to these characters and realism in their struggles, but then it’s also got a piece of fantasy, so it takes you out of your world a little bit. It’s lighthearted in the sense that on the surface you can enjoy it and you can have a great time watching it, but it’s got so much depth that you can really let yourself be challenged and moved.”

Oharah said the play “looks at death pretty straight on, it doesn’t beat around it at all. It looks at death, it looks at children moving away from parents and some of those harder, more emotional topics. It doesn’t shy away from hard topics, but it’s treated in a way that you’re not depressed. You’re not shoved into this dark pit of despair while you’re watching it.”

Readers might note that the racial demographics of the French Caribbean and of Chaffee County are not the same. Indeed, the original story deals heavily with not only wealth-based classism, but prejudice between dark-skinned peasants and the light-skinned Grands Hommes.

“The writers put in their script ‘This is a story for anyone to perform. We believe the story is powerful and we want anyone to perform it,’” Oharah said. “They make two scripts based on who you have available to work with. So that way you can still tell the story of the socioeconomic divide when you aren’t capable of telling the racial divide side of the story.”

There will be two ways to see Trident Theatre’s “Once on this Island.” Oharah recommends seeing it the old-fashioned way, if you’re comfortable. In-person dates for the performance are April 16-18 and 23-25 at the Flex Commons at Buena Vista High School.

Occupancy of the theater is limited to 70, and tickets are on sale for $10 at https://bvhsco.booktix.com/cart.php

Between April 20 and May 2, a filmed version of the performance compiled from footage of the live performances will be available for home viewing at https://www.showtix4u.com/event-details/48140

For the stream, single tickets will again be $10, household tickets are $20 and large viewing party tickets are $100.