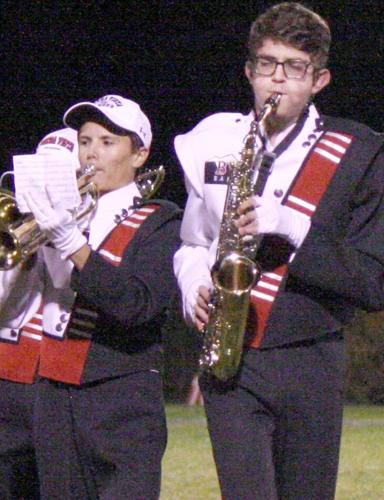 Performing with the Buena Vista HS Marching Band at halftime of a recent BVHS football game are Jacob Young on the baritone horn, left, and co-drum major Andrew Cunningham on the sax. 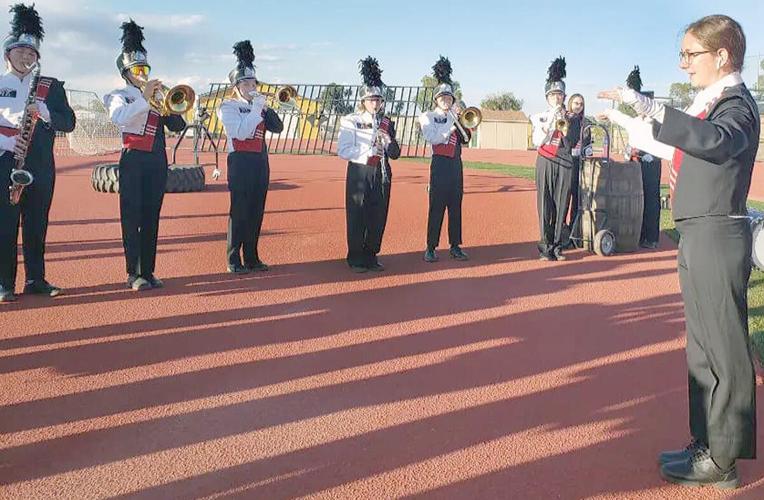 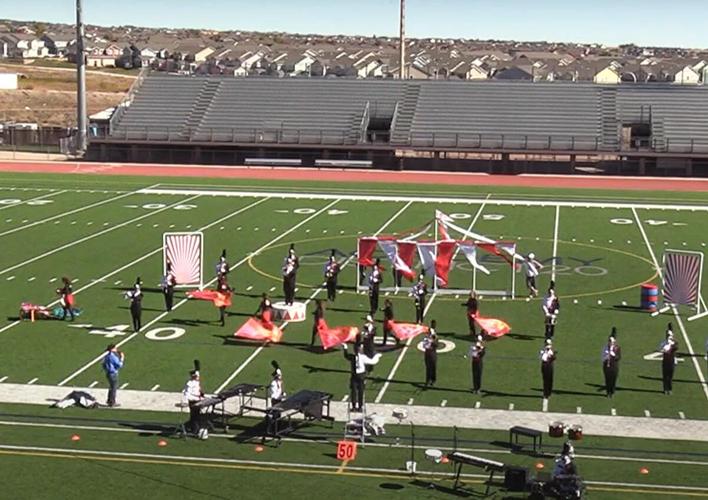 The BVHS Marching Demons perform their opener, “This is Me” at the SoCo competition.

Performing with the Buena Vista HS Marching Band at halftime of a recent BVHS football game are Jacob Young on the baritone horn, left, and co-drum major Andrew Cunningham on the sax.

The BVHS Marching Demons perform their opener, “This is Me” at the SoCo competition.

Last fall, Buena Vista High School saw the start of its own marching band. After visiting an exhibition in Pueblo, the band felt encouraged, both by results and by judges, to start competing in 2022.

The band consists of students in grades 8 through 12, says middle and high school band director Marti Bott, which led to the challenge of rehearsing only once a week when the entire band could be together. Class time could be used to march, but this wouldn’t include the 8th graders and the color guard.

“We played at several home games, and as the season progressed, we improved with each performance,” Bott says. “By the time we did the SoCo exhibition in Pueblo on Oct. 10, we had most of a show put together. We were able to add the entire middle section to our marching show by the Colorado regional competition in Colorado Springs on Oct. 19.”

In the end, the BVHS marching band placed eighth statewide for 1A bands – just two points away from qualifying for state.

“This was a very big deal for us, and we know that going to state is within reach next year,” Bott says. “There were 10 judges at the regional competition, and we got great feedback that will help us prep for next year’s season.”

Bott was interested in starting a marching band at BVHS since she began teaching there, but found the process daunting due to funding, time and other necessities. She and her students had even tried starting one a few times but ran into challenges, including the transition from the old school to the new one and the COVID-19 pandemic.

“Last fall, we were still dealing with much of the COVID fallout, and we were still trying to play music outside when possible in order to not be playing instruments in an enclosed space,” Bott says. “It seemed like the natural time to get the marching band going. We were also still having a hard time finding qualified people to assist with the color guard, drum line, etc., and we didn’t have any dedicated funding to get it going, but we just decided to go for it anyway.”

This fall, the marching band was able to perform for most of the home games, piecing the show together each time until it was mostly completed by the last game they performed at.

“I am so lucky to be a part of this band because it is an environment full of fun, hardworking people that are willing to make mistakes and grow from them,” says junior Emi Brooker. “I love being a leader in this band because when people need help, they come to me and I just love getting to know everyone. I enjoy making music with this fun group of people and I love watching them as I conduct because they learn and grow so much and I just love it.”

In addition to be one of the drum majors, Brooker also conducts, plays the piccolo and feels “very passionate about the flute.”

She hopes to improve on being a drum major and help the band become better, working on musical phrasing and dynamics and stepping in time on the field.

With how the band has performed this season, Brooker is confident of success competing again next year.

“It was so rewarding in the end to have a finished product that we were all so proud of,” she says. “We didn’t make it to state, but we all learned and grew so much, so next year we will have a much easier time placing at state.”

Bandmate Danielle Neufeld, also a junior, has also put a lot of work into this band, showing up to every rehearsal, organizing sectionals and group rehearsals and helping out younger players. Seeing how far they got in just their second year, she’s optimistic that the band can only keep getting better.

“I’ve loved being a part of the marching band and seeing the growth we’ve experienced since last year,” she says. “I think doing something like this is definitely rewarding and I am proud to have been part of it.”

Neufeld’s proud of her bandmates for working through the challenges this season.

“Since the beginning of band camp this year I’ve seen an immense amount of progress,” she says. “Everything from our tone to our marching to just the overall effect of our performance grew so much and it was so rewarding to see. I am hoping that next year we can make it to State and really nail down everything we work on.

“It is a lot of work thinking about the music, the tone, the marching, the drill and everything that is put into a performance, but based on what I saw this year, I think we will be able to pull it all together really well next year and reach our goals,” she says.

The band has taken time to get up and running for the need of reliable color guard and percussion coaches, as well as for lack of funding from the school district. The band also hopes to acquire funding for a trailer, truck or multiple U-Haul rentals each fall; uniforms and dry cleaning; props to use on the field; entry fees for events or competitions; two cordless microphones; a rolling cart fabricated for the sound system as well as for the keyboard; sheet music, marching shows and drills; hotel costs for at least one event; and some marching brass instruments such as a marching baritone and a marching tuba.

With so many costs to cover, the need for additional funding for the band has taken a high priority. But Bott is determined to keep this band running and allow the students the chance to compete.

“We now have some students that have marched for 2 years, and we can continue to build on what we’ve learned,” she says. “Our students have worked incredibly hard. Some students would call extra practices to work on the music or other aspects of the show, and it was amazing to see students go above and beyond.

“These kids have incredible work ethic, and have really put a lot of time and energy into their show this fall. I love these kids, and it’s been amazing to watch how they have grown to be like a family.”

Bott would like to give thanks to all who have provided aid and support for the marching band so far: Gary Johnson for co-teaching the marching band, Jim Reed for creating the props used on the field, Michelle Crago for work with the color guard, Matt Dooley who assisted with some group lessons with the drum line, Dan Salisbury for work with the percussionists, Melinda Leoce for work with the drum line during marching camp, the Buena Vista Optimist Club, K’s Dairy Delite, DJDJ & Cordova Enterprises, High Country Bank, TBK Bank, Taco Bell in Leadville, the Walden Chamber Music Society and all the parents that volunteered to help in various ways this fall.