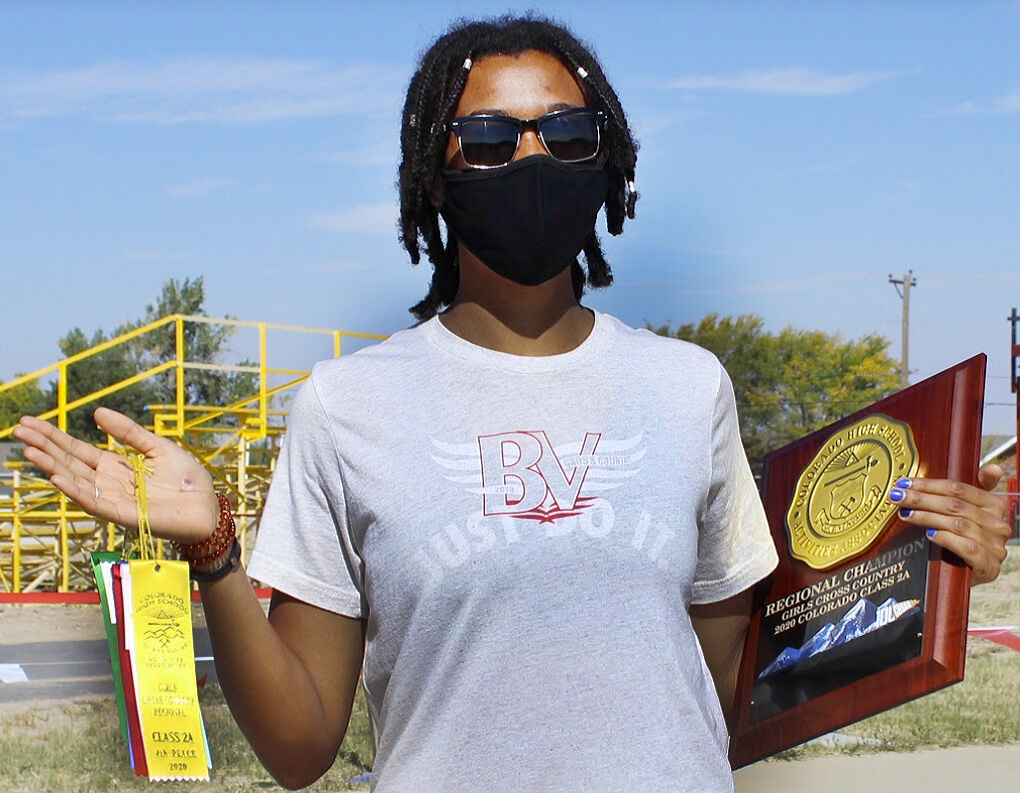 Getting ready for the next race while coach Julia Fuller displays the Regional championship trophy are, from left, Alexis Santopietro, Kadance Kelso, Zaila Smith, Molly McMurry and Mallory Salazar.

Getting ready for the next race while coach Julia Fuller displays the Regional championship trophy are, from left, Alexis Santopietro, Kadance Kelso, Zaila Smith, Molly McMurry and Mallory Salazar.

The BVHS cross country teams are headed to the state championship meet Saturday in Colorado Springs.

The girls emphatically finished a season of domination by taking all of the first five places in the the 2A Regional at Rocky Ford High School.

The first five. All five places. One through five, all Buena Vista Lady Demons.

“Wow! That is a rare accomplishment,” CHSSA assistant commissioner and unofficial staff historian Bret Borgmann said. “I can’t say that I have heard of that happening before, but I couldn’t say for sure.”

Borgmann said he recalled a state championship meet where the winning school had three of the top four times, but couldn’t recall the 2A or 3A school

“Unfortunately, we don’t have a collection of regional results that we can check,” Borgmann said. “But I would say this is a rare feat that is seldom, if ever, duplicated.”

As she has in all seven races this year, sophomore Zaila Smith won the race with a pesonal best time of 18 minutes, 52.46 seconds.

Lady Demon teammate Mallory Salazar took runner up for the fourth time this season, finishing the regional race in 19:48.72. Salazar was third the other three races.

“It has been so powerful watching all of our team push each other this season, and I think seeing the girls team go 1-5 really emphasizes the way this team has worked together,” Fuller said. “They’re able to give it their all, and know each other is doing the same.”

The runners compete with each other on the race course, from start line to just after the finish stripe.

“They get to bring out all the friendly competition and try to beat each other,” Fuller said, “and then hug each other with such deep gratitude after they’ve crossed the finish line together. This team continues to make each other better each and every day.”

Salazar entered the year as the team’s top and seasoned runner. That status evaporated early as she watched a newcomer run past her.

“As a coach, you can never be sure what might come, or how an athlete might react when someone steps in ahead of them in the season and takes their usual team ranking away,” Fuller said.

“I have truly been in awe this season as Mallory has invited it. When Zaila joined our team this year, Mallory didn’t see it as competition so much as companionship. Someone working toward goals that aligned with her own, who was ready and willing to make her better too,” Fuller noted.

She also saw Salazar’s attitude and interaction (read leadership) have an impact on the rest of the team.

“I believe that has been such a strong example to the rest of the team and has trickled down to the way others are able to work together on this team,” Fuller said. “To an outsider, cross country might seem like merely an individual sport, but when you’re in it, especially here in Buena Vista, everyone knows it is about so much more than just yourself. And at this point in the season team, looks even more and more like family.”

Smith, for her part, started running and, as the old saw goes, never looked back.

“Zaila has run this season untouched in any race. She has done so with humility and with a lightheartedness about her,” Fuller said. “It has been absolutely incredible to watch and coach. She is a smart runner, a fierce competitor, and as a sophomore knows her race so well and has many races to come in her running career.”

“She is always ready to work hard, and this is one last chance for the season to show that,” Fuller said. “We all are looking forward to her and both teams going head to head with the rest of Colorado 2A’s top competitors and seeing what they can make happen.”

He can do better, Fuller predicted.

“This team’s motto this year has been ‘Train Like Champions.’ They’ve focused their energy into every little detail of what they do, from hydration and sleep, to their studies and their mental game,” Fuller said, explaining the process behind training like a champ.

“Each week as we’ve built one step closer to state, they’ve refined who they are as athletes, students and people,” Fuller said. “They continue to give their all in every little piece of what they do, and in this final week of the season, we get to give it our all one more time and reap the rewards of all their hard work. Hoping that ‘Training like Champions’ may lead to just that.”

The rest is as repetitive as running steps.

“At this point as a coach, I am simply asking that they do exactly what they have done each and every time this season – approach the finish line to this season with immense joy in each step and a little bit of fire in their souls, knowing that each and every one of their teammates is doing the same and giving their very best,”