Athletes from other Buena Vista High School fall sports turned out to support and cheer on the school’s cross country teams at Hutchinson Ranch in Salida Saturday. “They sat up on top of the hill and you could hear them down at the starting line,” BVHS cross country assistant coach Adam Fuller said. “That was kind of nice.” 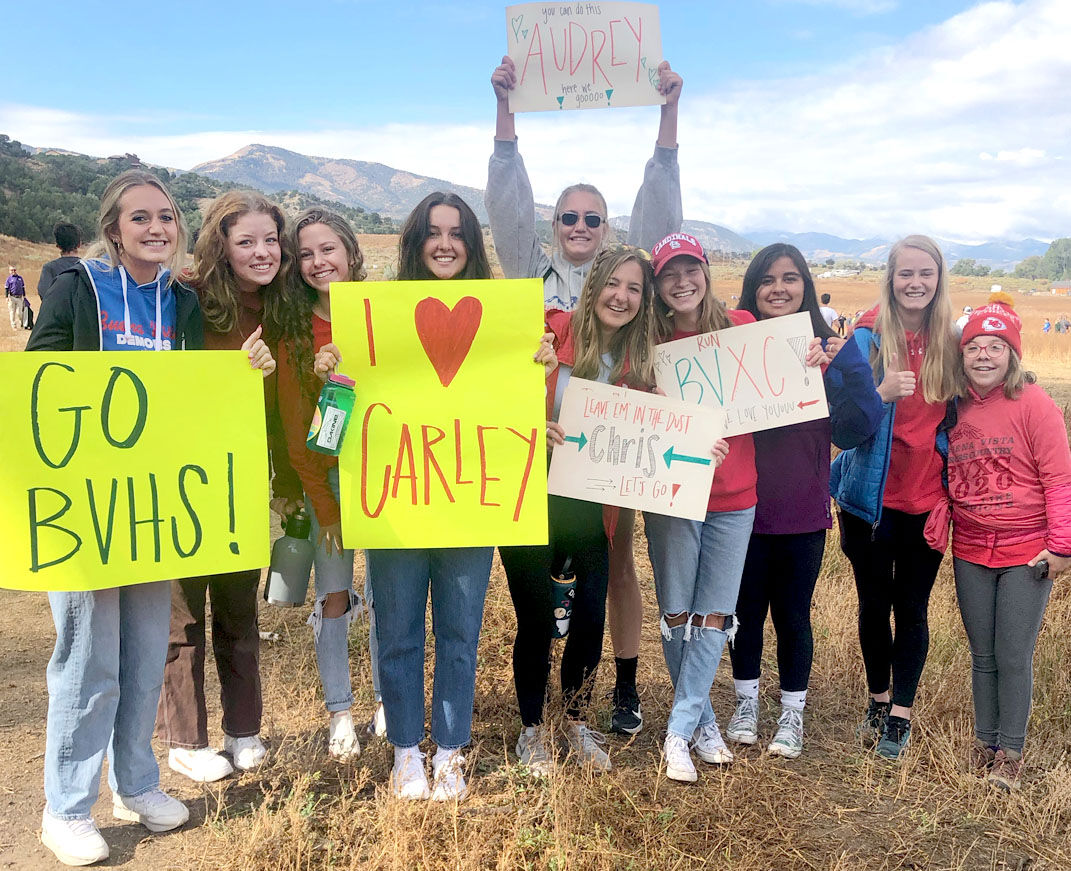 Athletes from other Buena Vista High School fall sports turned out to support and cheer on the school’s cross country teams at Hutchinson Ranch in Salida Saturday. “They sat up on top of the hill and you could hear them down at the starting line,” BVHS cross country assistant coach Adam Fuller said. “That was kind of nice.”

The Hill Gang turned out in numbers to cheer the Buena Vista High School cross country teams Saturday in Salida.

“She had a pretty good margin on the second place runner,” assistant coach Adam Fuller said. “It wasn’t her fastest time, but it’s a tough course.”

“There’s a really challenging hill about 1 1/2 miles into the course,” Fuller said, a high hill, with a good view.

Athletes from the other fall sports at BVHS came out Saturday morning to cheer on Demon runners.

“They sat up on top of the hill and you could hear them down at the starting line,” Fuller said. “That was kind of nice. Cross country hasn’t always had the support other spots have had, but the kids have really made the effort this year.”

Fuller especially noted football team members “who got off the bus at 2 a.m. and were at the ranch before the 10 a.m., start,” as well as volleyball players and others.

“They rallied to what was almost a home meet at BV South. It was most impressive they all traveled to support other sports,” Fuller said.

“We got to enjoy a morning that felt like fall and a race that always feels like a true cross country course, with water, hills and fields all in the mix,” head coach Julia Fuller said. “The team had a great showing and overall we saw some of our season’s best races. That may not have been reflected in a PR, but that’s not really anticipated at this meet.”

Smith led the BV girls to a third place team finish with 82 team points. Regis Jesuit won with 32 points and Salida was second with 61 led by Quinn Smith’s third place effotr at 21:22.

“Zaila Smith went out hard and never looked back this week. She was all smiles while climbing the infamous hill and worked to continue to push it through the finish line. Molly McMurry, Jett Adams, Kate Helmke, and Peyton Wakefield did indeed walk away with season best times which just leads us to believe that they have a lot more coming the next couple of weeks,” Julia Fuller said.

“Our team stretched pretty deep (in Plottner’s absence) and that was great to see,” Adam Fuller said. “The middle pack boys keep flipping each other and we have to determine who our top six will be for state. It’s been some great competition there.”

“Chris Hutching improved his Salida time by over a minute from last year and many others walked away from this race looking the strongest that we’ve seen thus far this season,” Julia Fuller said. “It’s encouraging to see everyone coming together, having fun, and working hard as a team.”

Next up is the Tri-Peaks League meet at Vanguard in Colorado Springs.