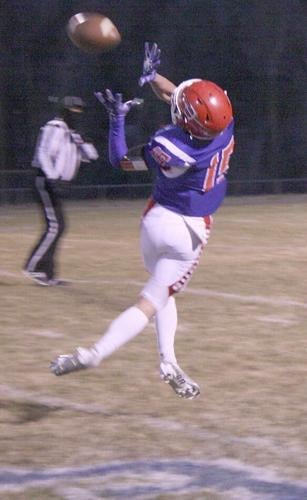 Caleb Camp jumps and twists into the air to bring in a 34-yard pass from his older brother Haden . 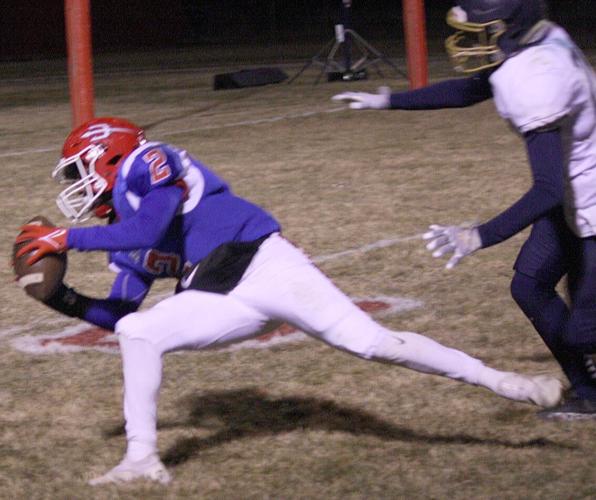 Tam Flowers snags a 40-yard pass from Haden Camp to set up Camp’s go-ahead touchdown run in the final minute.

Elijah Flowers grabs a loose punt after it hit a CSC player in the fourth quarter.

Caleb Camp jumps and twists into the air to bring in a 34-yard pass from his older brother Haden .

Tam Flowers snags a 40-yard pass from Haden Camp to set up Camp’s go-ahead touchdown run in the final minute.

Elijah Flowers grabs a loose punt after it hit a CSC player in the fourth quarter.

Buena Vista’s season ended Friday night in a classic prep game fit for a Hollywood script save for the hometown boys not winning.

The back-and-forth prizefight produced 721 total yards of offense, half of it though the air of a 21-18 Colorado Springs Christian victory in the opening round of the 2022 CHSAA State Football Playoffs Class 1A tournament.

Three times Buena Vista turned away Springs Christian in the red zone in the first half, including CSC’s opening drive when Jacob Phelps picked off the first of two passes in the end zone.

The Demons responded by driving 72 yards to come away with a 3-0 lead with 6 seconds left in the first quarter after Tam Flowers kicked a 43-yard field goal dead center on the uprights despite a near crosswind out of the north blowing Old Glory out straight.

CSC responded by seemingly running at will to drive the length of the field again on its way to 264 rushing yards in the game. Ashton Lofton scored on a 25-yard run to give the Lions a 7-3 lead with 3:14 left in the first half.

Phelps had another interception late in the second quarter, then outjumped the receiver to the high point of the ball and slapped it away as time expired in the first half.

The Lions finished the first half with four trips inside the BV 20 and only one touchdown.

CSC drove 53 yards in six plays to open the third quarter, scoring on QB Jake Jelasquez’s touchdown run up the middle. He then hit Casey Orawiec for the 2-point conversion and a 15-3 lead with 6 minutes left in the third.

Ethan Flavin’s first down run and a CSC penalty set up the Demons at their own 43 and a Phelps run for 21 yards set up BV at the CSC 36.

Flavin took the handoff on the next play on a sweep and then connected with Caleb Camp on the halfback pass for a 31-yard touchdown strike. Flower’s PAT cut the deficit to 15-10 with 4:40 left in the third quarter.

CSC romped down the field again, but this time was thwarted when Camp outjumped the receiver on fourth-and-long from inside the Demon 9 in the final minute of the third quarter.

With 9 minutes left in the game, BV’s special teams asserted themselves into the game when Flowers kicked a sky-high punt from the BV 24 that travelled just 15 yards downfield.

The punt landed on the shoulder pads of a Lion and the loose ball was recovered by Elijah Flowers at the Demon 39.

BV couldn’t take advantage of the opportunity but took the field position advantage two possessions later when Haden Camp hit Tam Flowers on a fly route up the left sideline to the CSC 2. Camp scored the next play on a cutback and ran in the 2-point conversion for a 18-15 lead with 55 seconds left in the game.

Orawiec had a strong return to the Lion 35 with 48 seconds left. CSC needed just three pass plays to score on 15-yard pass from Velasquez to Orawiec with 8 seconds left in the game. The PAT run failed and CSC led 21-18.

Buena Vista had one play left in its season, a 33-yard halfback pass from Phelps to Haden Camp who was gang tackled about the BV 30 as time expired.