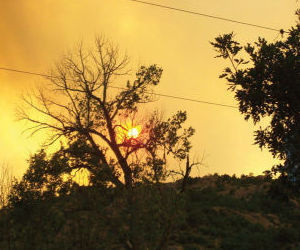 The sun sets on another day of the Hayden Creek Fire near Oak Creek. This photo was shot near Custer County Road 1-A. 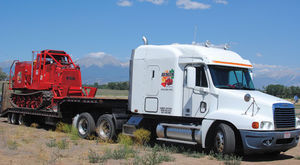 Heavy equipment like this is being used to construct containment lines for the Hayden Pass Fire. Large equipment began arriving Tuesday and was staged on city-owned Vandaveer Ranch property.

The sun sets on another day of the Hayden Creek Fire near Oak Creek. This photo was shot near Custer County Road 1-A.

Heavy equipment like this is being used to construct containment lines for the Hayden Pass Fire. Large equipment began arriving Tuesday and was staged on city-owned Vandaveer Ranch property.

“This fire management team is up and rolling and very organized,” said Fremont County Sheriff Jim Beicker at a press conference on the Hayden Pass Fire Tuesday evening in Howard.

The fire did not grow much Tuesday, said public information officer Kyle Sullivan, and the fire burned within established lines.

Firefighters are setting lines off CR 6 toward Big Cottonwood Road, and hotshots are working from Big Cottonwood Road toward CR 6, he said. They are using established lines from the 2011 Duckett Fire and continuing them as needed.

Firefighters assessed structures threatened by the fire and took measures to increase defensibility by moving stored firewood away from homes, cleaning gutters of flash fuels and more, said Sullivan.

Helicopters have done a really good job of holding the line near CR 6, he said.

Sullivan said a few structures were now within the fire perimeter but that does not mean they have burned.

Other fuel still remains unburned inside the perimeter and crews are keeping an eye on it, said Sullivan.

While the fire reached more than 12,000 acres, no additional mandatory evacuations were issued Tuesday.

“It concerns me a great deal that people in my county have been displaced,” said Beicker.

The length of the evacuations depends on fire conditions and the fuels left, and it will, unfortunately, be an extended event, he said.

Beicker suggested that short-term, escorted visits home for those evacuated may become an option in the future.

In the coming days, hotshot crews will increase fire lines by intentionally setting back fires ahead of the fire perimeter to limit its advance, said Sullivan.

A community meeting for the public will take place at 7 p.m. today at the Cotopaxi High School gym.