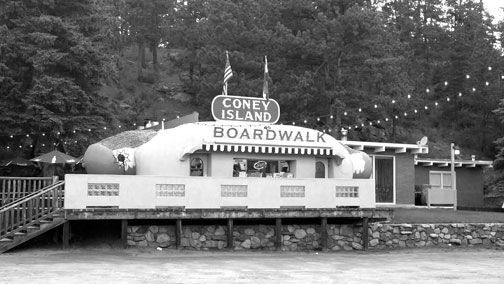 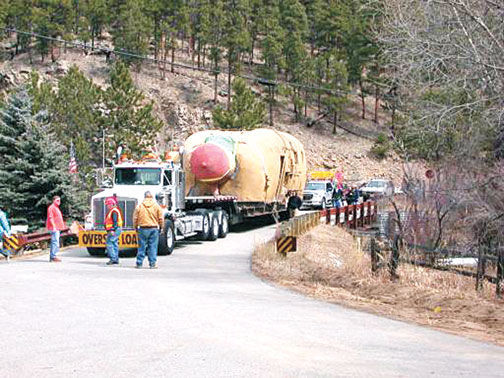 Once just a shack in the shape of a hot dog, Coney Island is shown here being relocated to Bailey from Aspen Park in 2006. The renovated diner and additional building on an acre of land just west of downtown Bailey are up for sale again nearly a decade later.

Once just a shack in the shape of a hot dog, Coney Island is shown here being relocated to Bailey from Aspen Park in 2006. The renovated diner and additional building on an acre of land just west of downtown Bailey are up for sale again nearly a decade later.

An iconic landmark in Bailey is up for sale.

Ron Aigner, owner of Coney Island, the famous hot dog building just south of town, is retiring and looking to pass on the restaurant’s legacy.

For sale at a listing price of $1,495,000, the famous larger-than-life hot dog comes with extras. The restaurant itself has been upgraded, including more space than when it arrived in Bailey in 2006. There’s potential for a bakery or an ice cream stand in addition to the main business of hot dogs.

Coney Island, a 14-ton hot dog sculpted food stand, sits on nearly an acre of land along U.S. 285. The North Fork of the South Platte River provides a lovely backdrop to the property. It comes with an additional commercial building (which currently houses Fun & Funky art gallery) and two rental apartments.

Urban said the building, built in 1966, originated in Denver. It sat on Colfax Avenue as The Boardwalk of Coney Island. In the ’70s, the structure was moved to Aspen Park and was initially established as Coney Island Dairy Land, but dropped half of the name after a while.

In 2006, the Coney Island was purchased by Aigner for $150,000 and moved to its current Bailey location.

“Coney Island is a recognized landmark,” Urban said. “It would be great to see it become what it really could be.”

Urban said a buyer interested in bringing the diner up to date with a contemporary menu, while still serving the traditional roadside dog and milkshakes along with implementing other fun ideas, would be “perfect.”

“And there are apartments,” Urban said. “Employees can live there, make it their life if they want to.”

Piggybacking on Urban’s enthusiasm for the restaurant’s potential, Andy Nortnik, owner of Fun & Funky art gallery in the building next to Coney and also the liaison between owner Aigner and interested buyers, says he’d love to see it purchased by a local.

“But anyone who knows how to run a restaurant and, more importantly, wants to preserve the historical nostalgia would be a great candidate,” Nortnik said. “There’s so much potential.”

Nortnik said part of that potential includes the probability of a profitable return on investment.

More than 30,000 vehicles travel the U.S. 285 corridor through Bailey each day during the summer.

“The place is always packed,” Nortnik said about the sight of continual Coney customers during tourism season. “Lines all the time.”

It’s a given that tourists are going to stop and check it out as they pass through, Nortnik said.

“People come here on purpose all the time too,” he said. “From Aspen Park and Denver and all over the world.”

The hot dog has been made famous by visits from television shows like Dan Atchley’s “Digital Postcards” and “Hot Dog Heavens” and RoadsideAmerica.com. It’s also very popular with the rockabilly counterculture and ’50s diner memorabilia enthusiasts, Nortnik said.

Nortnik likes to envision a possible future for Coney Island.

“Imagine hot rod runs, drive-in movie nights or car hops,” he said. Think of how much fun that would be.”

Coney Island is at 10 Old Stagecoach Road in Bailey. For more information about the property, contact Jim Urban at 303-933-7000 or email jim@homereferralteam.net.

To see a video tour of Coney Island and the property it sits on, search for “Coney Island Hot Dog for Sale” by Jim Urban on YouTube.