Jacob Phelps runs through a large hole on the Buena Vista end of the field in last week’s state quarterfinal victory over Meeker. The Demons ended their season with a loss at Centauri Saturday. 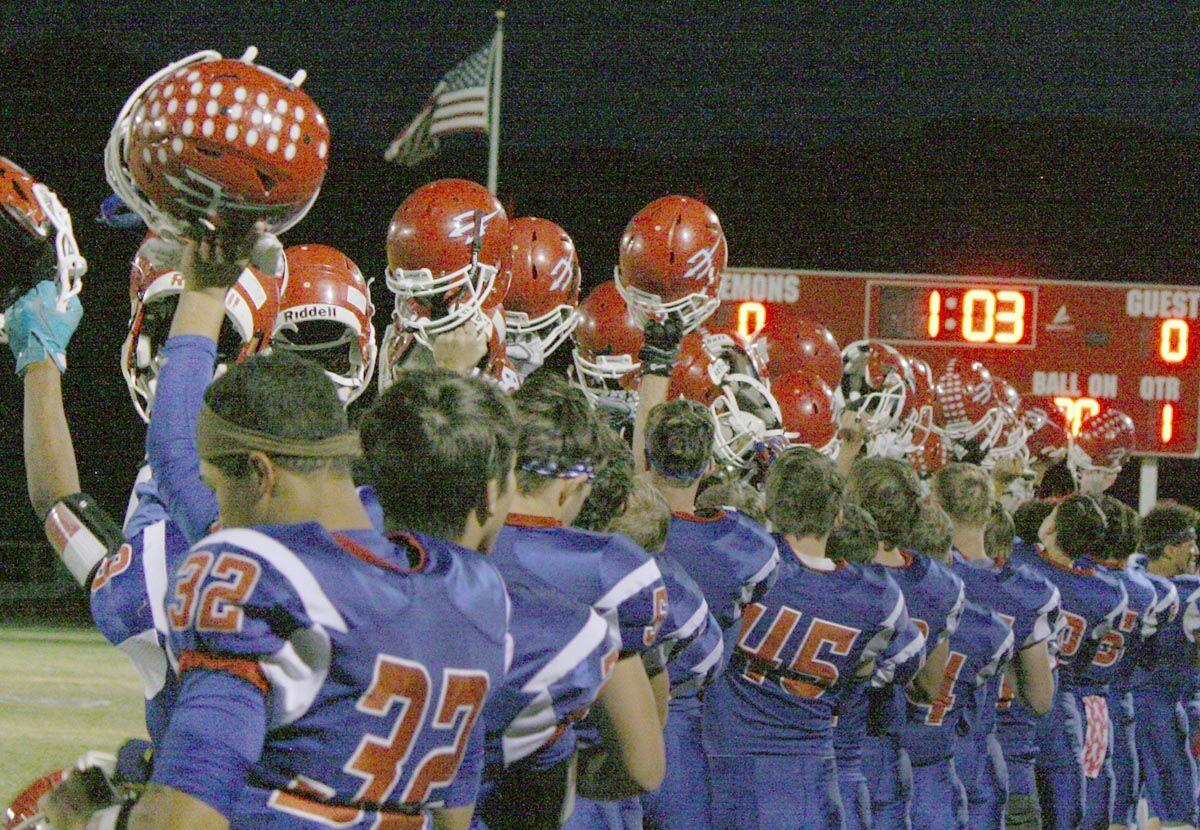 The Buena Vista Demons bench is helmets up along the sideline against Rye in October.

Jacob Phelps runs through a large hole on the Buena Vista end of the field in last week’s state quarterfinal victory over Meeker. The Demons ended their season with a loss at Centauri Saturday.

The Buena Vista Demons bench is helmets up along the sideline against Rye in October.

Four teams entered the Class 1A football semifinals undefeated and only two would remain for the state championship the following weekend.

The Buena Vista Demons were one of the odd-teams-out as Centauri handed the Demons their only loss of the year, 42-6.

Buena Vista received the opening kick and put together an impressive eight-play drive. The Falcons tackled Haden Camp at the line-of-scrimmage on fourth-and-2 at the Centauri 30.

Four plays later, Centauri showed off its speed when senior Mason Claunch got loose around the left end for a 50-yard touchdown run. Caleb Anderson split the uprights on the extra point and the Falcons led 7-0 with 7:13 to play in the first quarter.

Buena Vista put together another time-consuming, 15-play drive starting from its 32, just as they had game planned.

The drive ended on the first play of the second quarter when Diego Hernandez intercepted Camp’s pass over the middle on second-and-9 from the Falcon 15.

Centauri scored again six plays later on a 60-yard pass completion from Bryon Shawcroft to Peyton Polzin and led 14-0 with just over 10-minutes to play in the first half.

Camp and Tucker Storms hooked up several times in the passing game in the previous possession, but this time Devin Brady made an impressive pick on a long ball down the left sideline. The Falcons had the ball once again starting at their own 42.

This time the Demon defense rose to the occasion and forced a three-and-out to get the ball back to the offense.

Buena Vista came up inches short on fourth-and-1 at its own 24 and Centauri quickly knocked it in to go up 21-0 before halftime.

When the Demons went to the locker room down three scores they were not in an unfamiliar position. Two other times on the year they had come back from down two touchdowns to get the win.

Centauri quickly began to erase that hope by taking only three plays to score to open the second half. A 45-yard pass completion and a 28-yard Claunch run put them in the end zone again for a 28-0 lead.

The Falcons put up a couple more in the third period to get the mercy clock running before the fourth quarter started.

Buena Vista continued to show many of the talents that go them to the state semifinal. Camp may have had his best day throwing from the pocket and Storms had his best receiving day of the year.

Centauri will now face No. 1 Limon, who defeated Wray, to determine the state championship. The game will be played at 1 p.m., Saturday, November 27 on the Campus at CSU–Pueblo.

“Looking at from where we began and where we ended, the kids have come a long way not only on the field, but off the field,” Demon coach Matt Flavin said. “We as a staff could not be more proud of the men they are becoming.

“The program as a whole wants to thank the entire community for their continuing support,” Flavin said. “We are so fortunate to have a community like this one.”