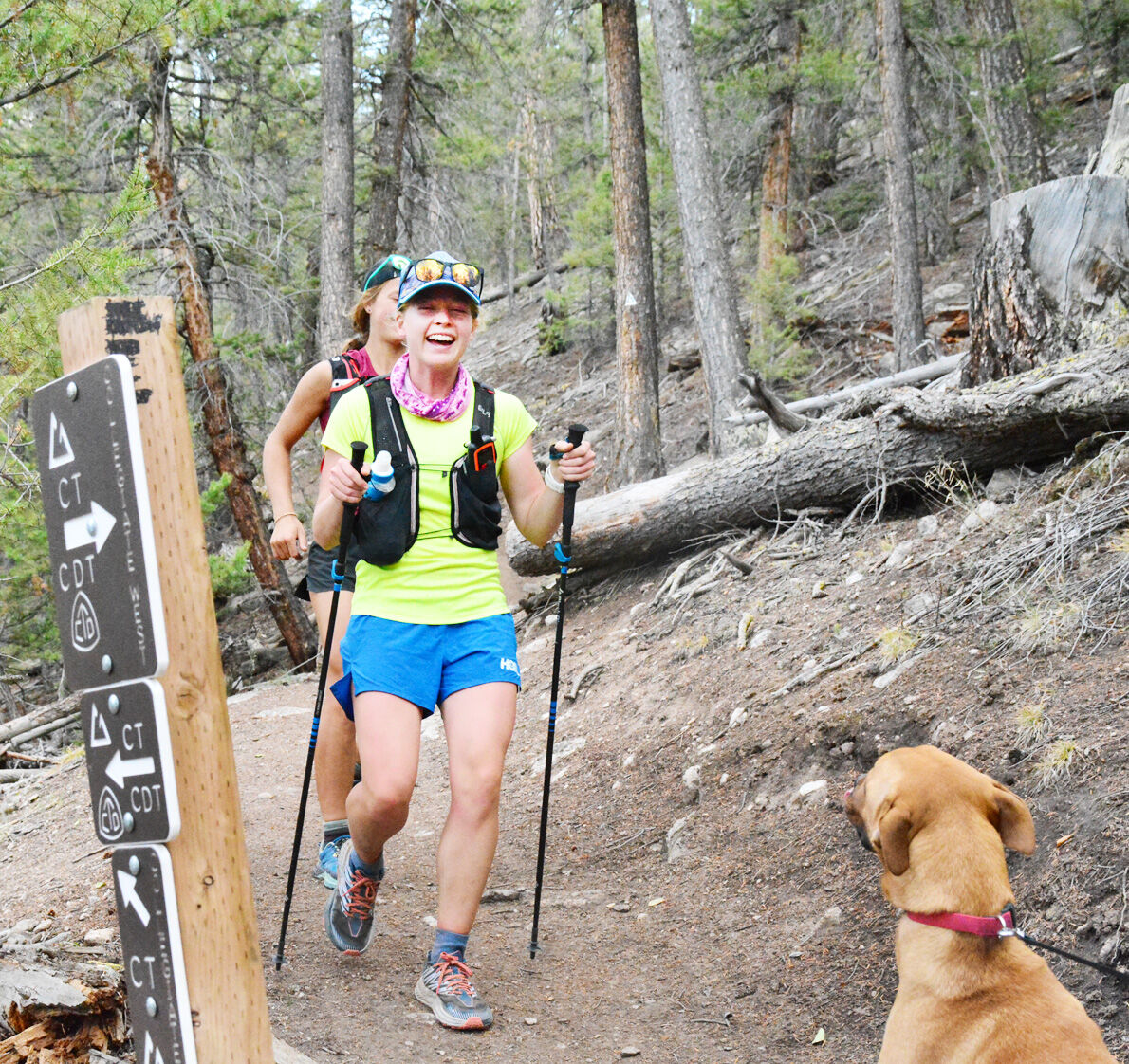 Annie Hughes approaches the finish after over 61 hours of running to complete her FKT of the Collegiate Loop in September. 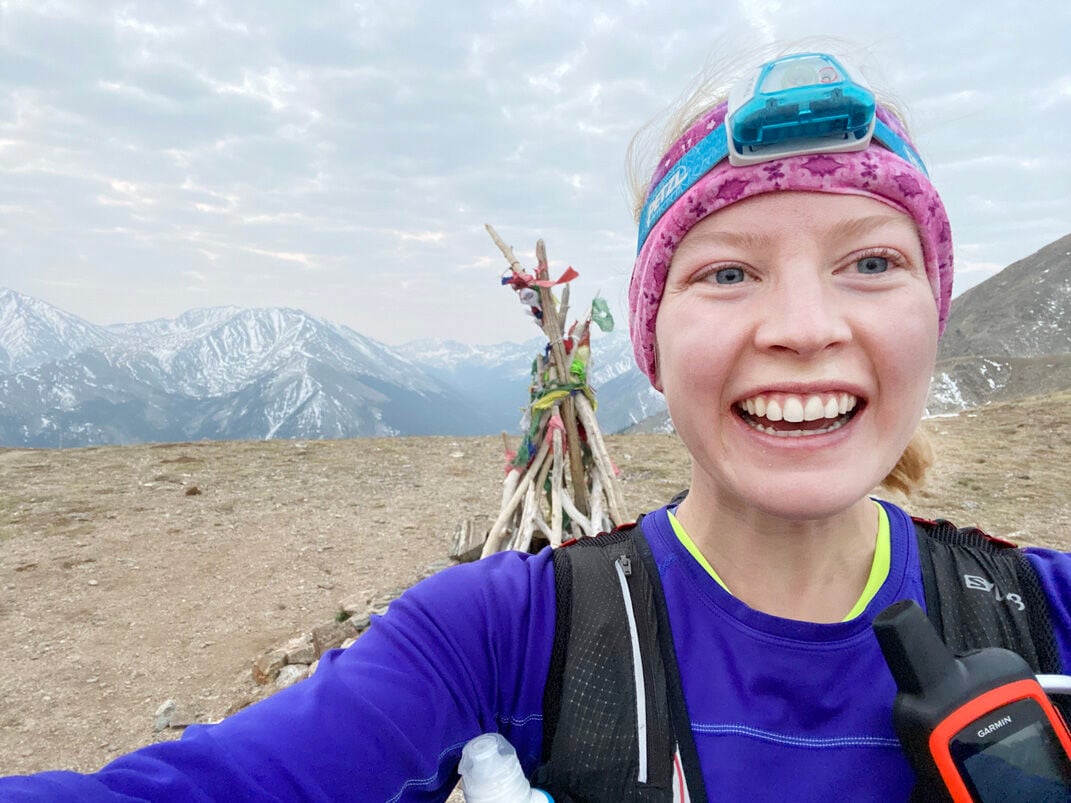 Annie Hughes approaches the finish after over 61 hours of running to complete her FKT of the Collegiate Loop in September.

When the Leadville 100 was cancelled this year due to COVID-19, 22-year-old Annie Hughes, a Buena Vista High School graduate who lives in Leadville and had been training for the ultramarathon, did the sensible thing and decided that she would run a course that was even longer and higher.

The Collegiate Loop is a 166-mile loop spanning from Twin Lakes to Monarch Pass, formed by linking the west and east options of the Colorado Trail. The east option is shorter and at a lower elevation, crossing CR 306 at the Avalanche Trailhead, while the west option is concurrent with the Continental Divide Trail, crossing the road at its summit on Cottonwood Pass. Hughes estimates that 20 miles of that route are above 12,000 feet.

Heading off from the point where the two options fork along the Interlaken Trail at 4:30 a.m. Sept. 18 and finishing with a time of 2 days, 13 hours, 19 minutes and 16 seconds on Sept. 20, Hughes set the fastest known time for a supported woman on the Collegiate Loop.

According to fastestknowntime.com, Hughes has three other FKTs.

This year, however, Hughes attempted her first 100-plus mile run with the Collegiate Peaks Loop.

“I was trying to think of something else I could do, and these FKTs have been really popular, people trying to set records in the mountains” she said. “That was just something I’ve always really wanted to do. I always thought I would probably backpack it, but then I looked up the record for it and thought it would be cool to try to run it.”

“Those mountains and that are are just really special to me, so to get an FKT for that loop, so close to home, it means a lot to me,” she said.

Compared to doing marathons, “it really just feels like more of your own experience, doing these FKTs,’ she said.

Hughes had been training for the Leadville 100 and had run a 100-miler earlier this year in Bryce Canyon in Utah, but the Collegiate Loop “was kind of a big step up from running for 28 hours to 61 hours,” Hughes said. “I was really interested to see what it would be like to run for two days and just see how nutrition can play into that, and sleep.

Hughes ran the loop supported, which means she had five pacers taking turns running with her, as well as a team that would bring her food, water and layers along the trail, which, according to alltrails.com, has a total elevation gain of 33,556 feet.

“I felt like it would be a reach goal, but that it was definitely possible,” she said. “The 100-miler prepared me really well, it’s just kind of mental after that point. Just to be mentally in it for that long is kinda taxing, but your body can absolutely do it if you can run 100 miles, I think.”

Setting up meeting points for her resupply team added an additional logistical challenge, especially along the Continental Divide that gave Hughes some insight into what it’s like to be a race director.

“I did set up the meeting spots and the times so that I’d be on track for the FKT, but I didn’t really think about it like that when I set out to do it, just because 160 miles is a big undertaking, especially after only running a 100-miler before, so I wasn’t completely sure if I was even capable of doing that, so I really just looked at it like this big adventure,” Hughes said.

Hughes started out going south down the west side of the loop, which proved to be the most challenging part of the run.

She was actually prepared to throw in the towel when she reached her next crew meet-up point.

“And then I got to that spot and I had two friends who were pacing me for the next section that I was going to pick up there, and they were just so pumped and excited to do that section with me that I thought ‘well, I can’t quit here,’” Hughes said.

With encouragement from her friends – and regular reminders to eat and drink water – Hughes regained her spirits and made up some lost time. In day 2, she realized that she was on track for the FKT and pushed herself.

The 20-mile section south of Cottonwood Pass was her favorite stretch of the trail. For the part that she ran during the day, she was able to take in the sweeping alpine tundra landscapes of the Continental Divide.

“It was kind of a surreal feeling to finish, just because I was out there for so long and you kind of feel like it’s never going to end, and everything I had to overcome to finish, it was just really special. It’s pretty surreal whenever you finish a 100-miler or a 100-plus-miler, just because you went through so much to get there,” Hughes said. “At the same time, it was kind of anticlimactic because it was so long, and then you just finish and it’s like, ‘huh.’ It’s kind of a weird feeling.”

Still, Hughes has plenty of FKT’s and races she’s got her eye on. There’s the Nolan’s 14, which links 14 fourteener summits in Lake and Chaffee County with a bushwacking, mostly off-trail run.