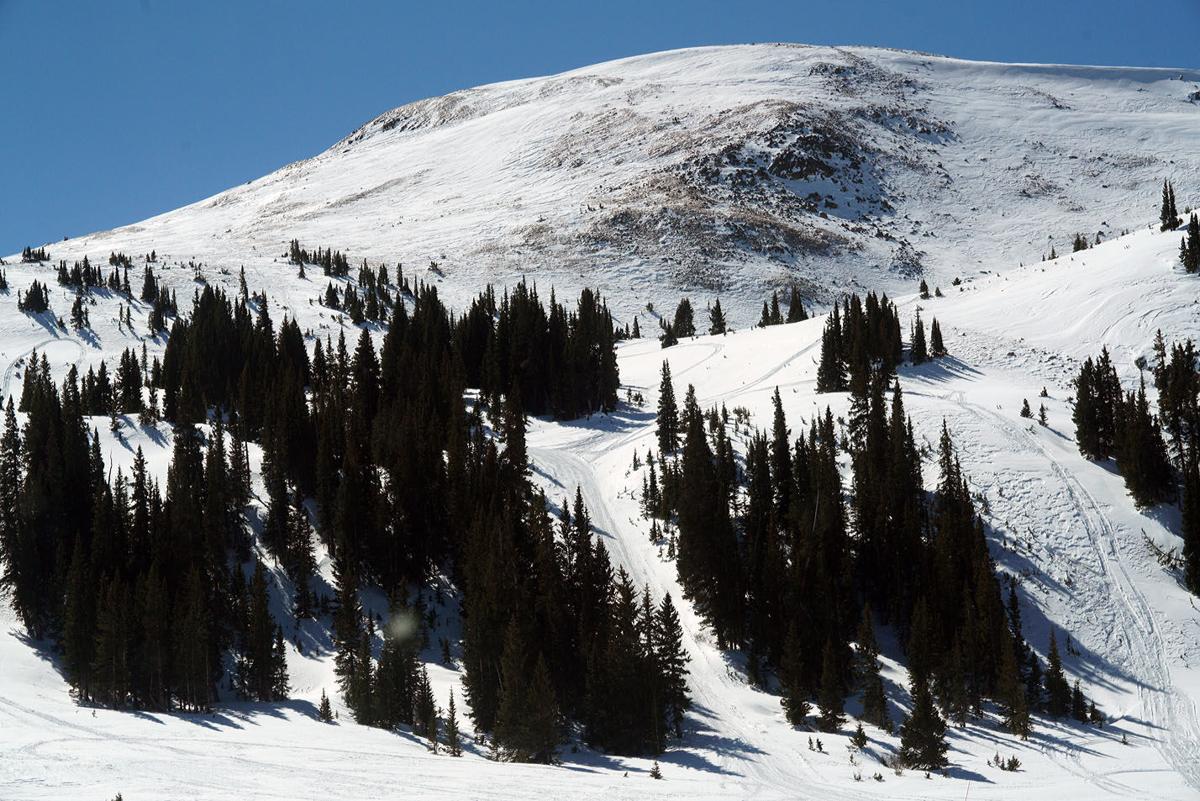 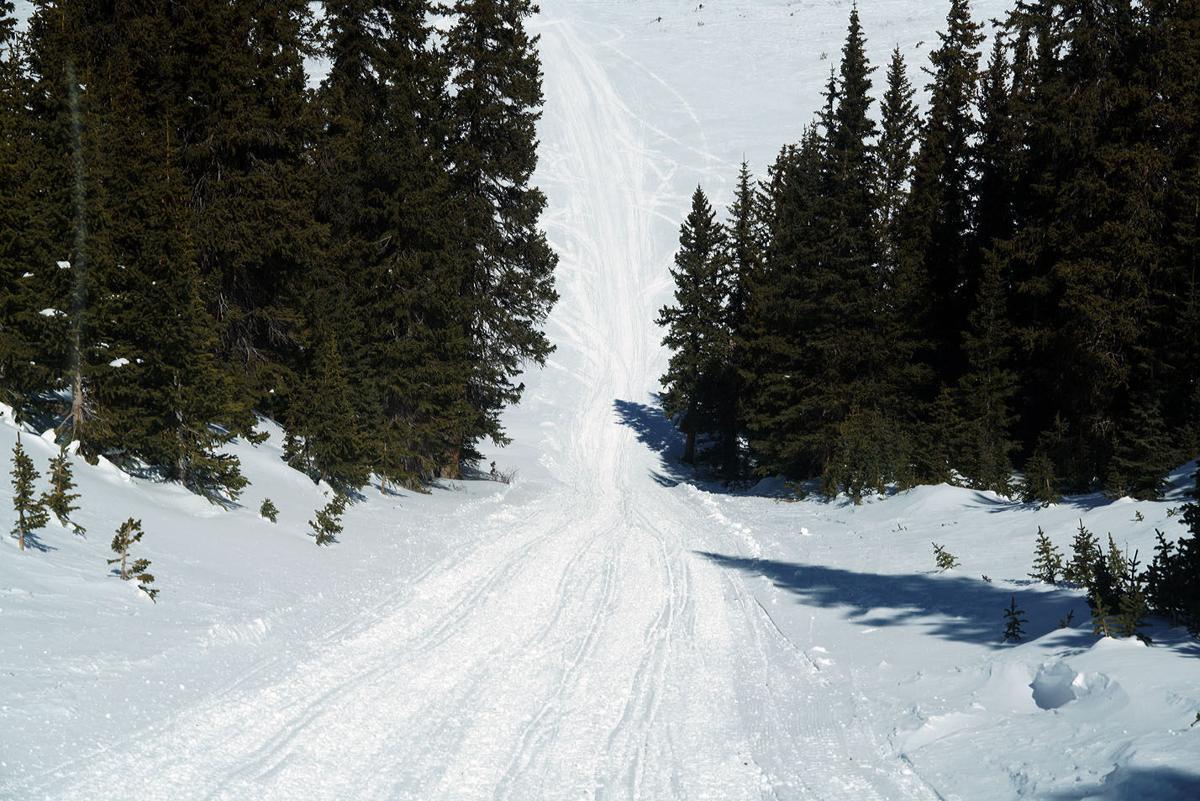 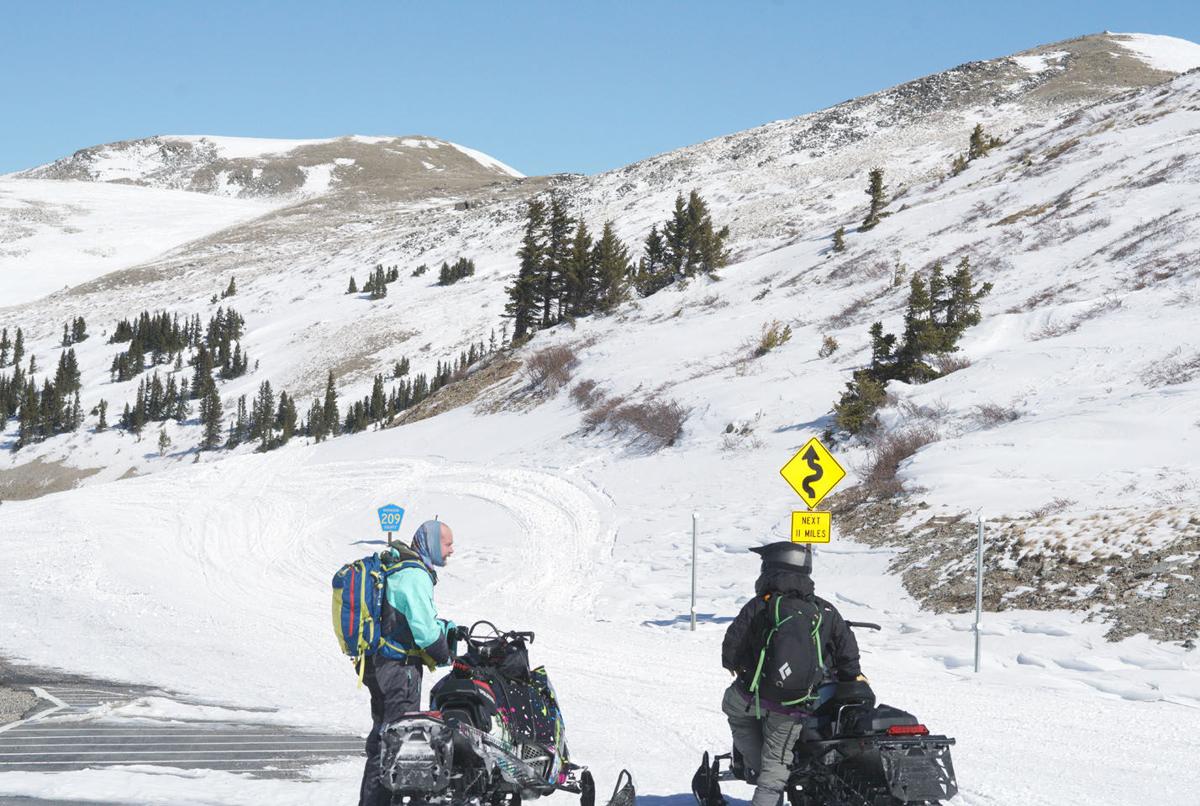 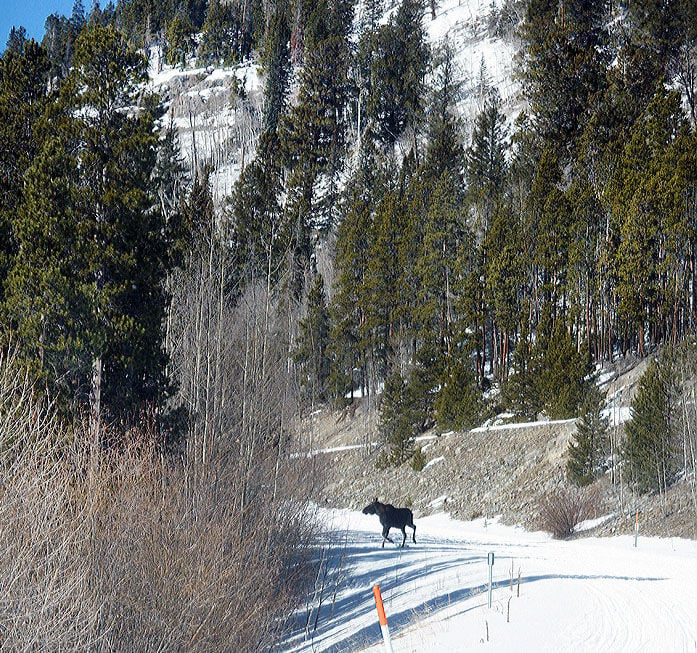 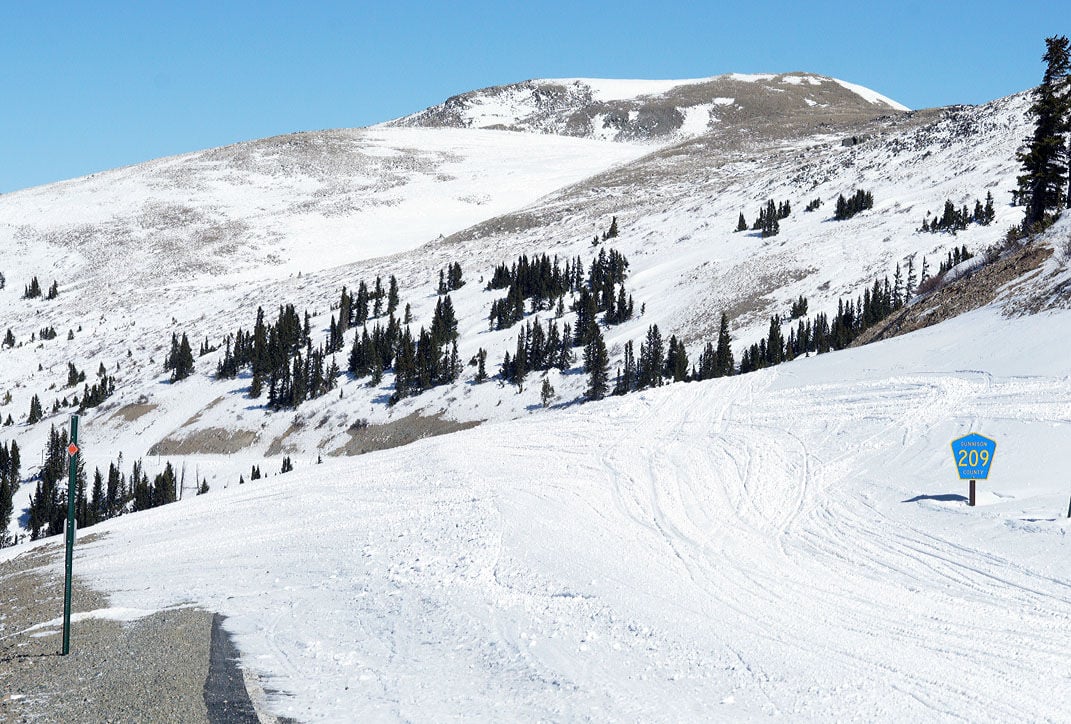 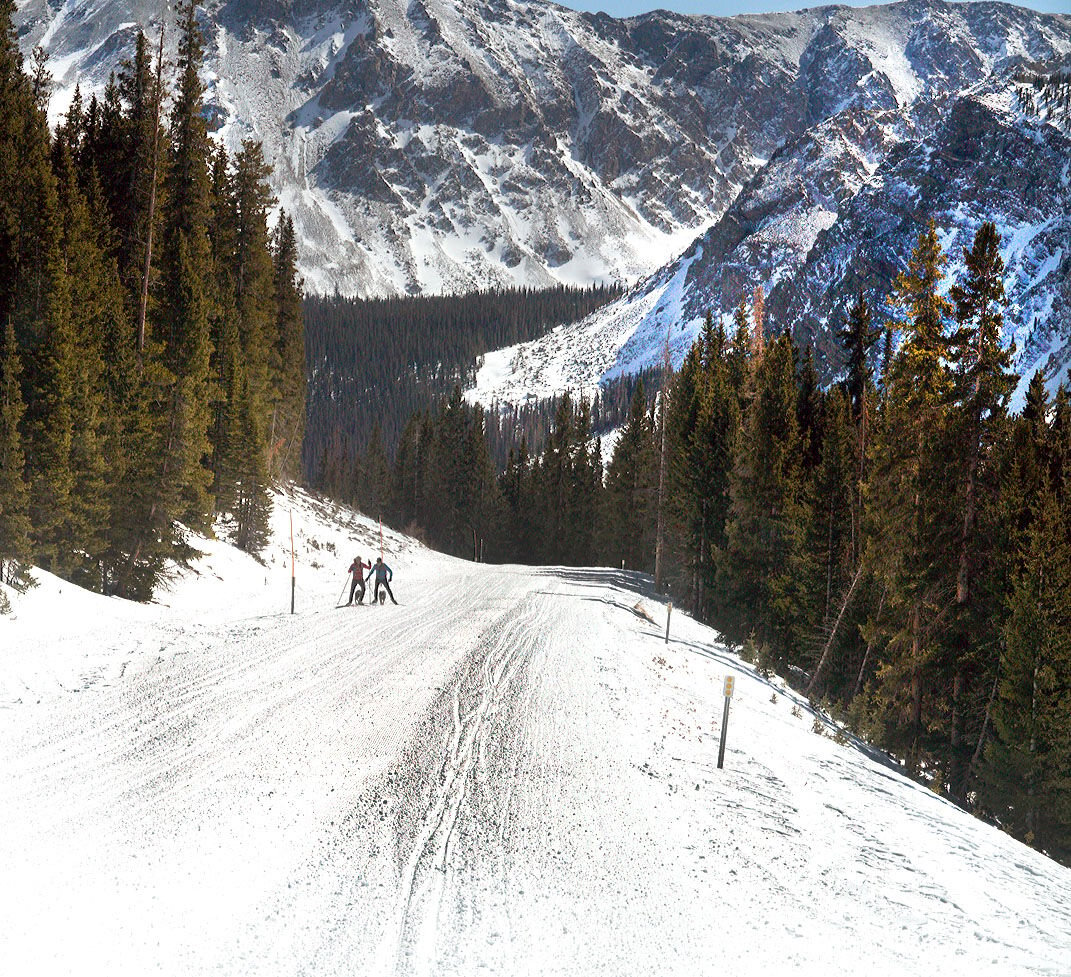 Beginning in November and extending through May 1, the Cottonwood Pass area becomes one massive state park, beloved by snowmobilers, cross-country skiiers and fat-tire bikers alike.

The black asphalt of CR 306 disappears under a layer of snow at the Denny Creek trailhead, where the road’s seasonal closure gate is located. A path still winds up to the saddle of the Continental Divide, up and over into Gunnison County, packed down and traced with thin parallel lines resembling brilliant white corduroy fabric.

That pattern is laid down by large, powerful, slow-moving grooming machines, and in the Collegiate Peaks of the Sawatch Range, those snowcats are driven by volunteers with the Buena Vista Snowdrifters snowmobile club.

Every Monday in the winter, Snowdrifters president Dirk Peratt takes a cat – one of two operated by the Snowdrifters – up the road to Cottonwood Pass.

“For years and years and years, cross country skiiers, snowshoers, haven’t come back here because they just assumed that it was just for snowmobilers,” Peratt said. “All of this is funded by snowmobile registration (fees), but it’s open to everybody.”

The Snowdrifters also groom the St. Elmo area – which can be reached from Cottonwood Pass this time of year via a vast network of snowmobile trails – and the Taylor Park area in Gunnison County.

“You can ride from Denny Creek all the way over to the other side without ever getting on the road,” Peratt said. The names of the trails immortalize the snowdrifters who created them.

Peratt has been grooming Cottonwood Pass for 18 years. He grew up in Denver, but “hated it,” he said.

Decidedly not a city kid, driving the diesel-powered snowcat, which has a top speed of somewhere around 7 miles an hour, offers a weekly, zen-like escape event far from civilization.

Each week takes him into a silent expanse punctuated occasionally by wildlife or by winter recreators who appear seemingly out of nowhere, give a friendly wave to the man in the big red machine, then disappear just as quickly.

Soon after departing from Denny Creek, we see a moose, which Peratt says he’s only started to see in Colorado in the past 3 years.

We see the tracks of a coyote running parallel to the swath of corduroy laid down by the cat, and Peratt remembers a coyote he used to encounter along the ridgeline who would play with the machine.

The coyote realized that the lumbering, growling beast would never be able to catch him, so he would would run ahead of it, occasionally turning, stopping and jumping playfully, taunting Peratt, only to run again as he got closer.

“That guy always made me smile,” says Peratt.

The Bowl at the base of the steep slope that CR 306 traces in a wide arc leading its final switchback before reaching the summit of the pass is heavily etched with sled tracks.

One line of tracks climbs up the avalanche-prone slope and makes a tight loop around a single tree poking out of the snow more than halfway up – evidence of behavior that is dangerous and explicitly prohibited by signage.

This year, Peratt observes that the snowpack is low. He points to delineation markers, speed limit signs, boulders and willow trees that by now should be totally buried.

In years past, the seasonal closure was set farther down the road at Avalanche Trailhead. In about a month, the groomer will start out from the Holy Cross parking area.

“This will all be melted by May or June,” Peratt said, hoping that March and April, typically the snowiest months of the year, can make up the deficit.

At the summit of Cottonwood Pass, one sign is almost completely buried. The winds have conspired to create a snowdrift several feet high, which Peratt says is a major reason that Cottonwood Pass could never remain open year-round as a road.

Daunting as it would be for a front-end loader to remove all that snow, the blades of the wide treads on snowcat pull the machine up and over the snowdrift, flattening a wide path with steep slope on either side.

“There’s been days when I’ve come up here and the drift has been super, super high. It’s a bit of an adrenaline rush,” Peratt said. “It’s amazing, because there will be a pinnacle right there in the middle, and you’ll think ‘Why am I not sliding off?’ And then you look behind you and there’s a flat road. This just cuts the snow and lays it out.”

The front plow of the machine scrapes up a thin half-inch layer of snow, balling it up in what looks like a rolled-up carpet. The snow slides under the machine, where it hits a rotating tiller that uses up about 60% of the vehicle’s horsepower, grinding the snow into an uniform texture that is then spread out smoothly by a wide bar.

The Snowdrifters are funded by grants from Colorado Parks and Wildlife, all of which goes to maintaining the large machines.

The one Peratt drives up Cottonwood Pass was built in 2004 and was purchased from a ski area in Aspen.

“This thing will drive up a 75-degree slope, pushing snow. When we get to The Chutes, you’ll see,” he says.

Part of Peratt’s grooming regimen includes going down the middle of three tree-lined paths down the west side of the pass.

The nickname The Chutes gives a good impression of the grade.

Looking down from the top of the chute, feeling the slight pull of gravity in the general direction of the panoramic windshield and realizing that a seatbelt still has utility in a vehicle that tops out at 7 miles per hour, the novice snowcat passenger needs to redouble their trust that the veteran operator to their left knows what he is doing.

The groomer handles the slope like it handles everything else – slowly and steadily. At the bottom, Peratt stops for lunch –a peanut butter and jelly sandwich.

On the way up, Peratt follows CR 306. Going back down, he dips into The Bowl down a more direct route, past a small hut that Chaffee County Search and Rescue uses in missions, invisible from the road among the tall pines.

In The Bowl, the groomer passes by a group of snowmobilers led by Andrew Maddox of Burandt’s Backcountry Adventures.

Maddox demonstrates to the group how to ride a sled up the rim of the bowl, a maneuver Peratt assures is much harder than it looks.

Maddox and Peratt stop and chat, and Maddox says that business is good, but “we could use more snow.”