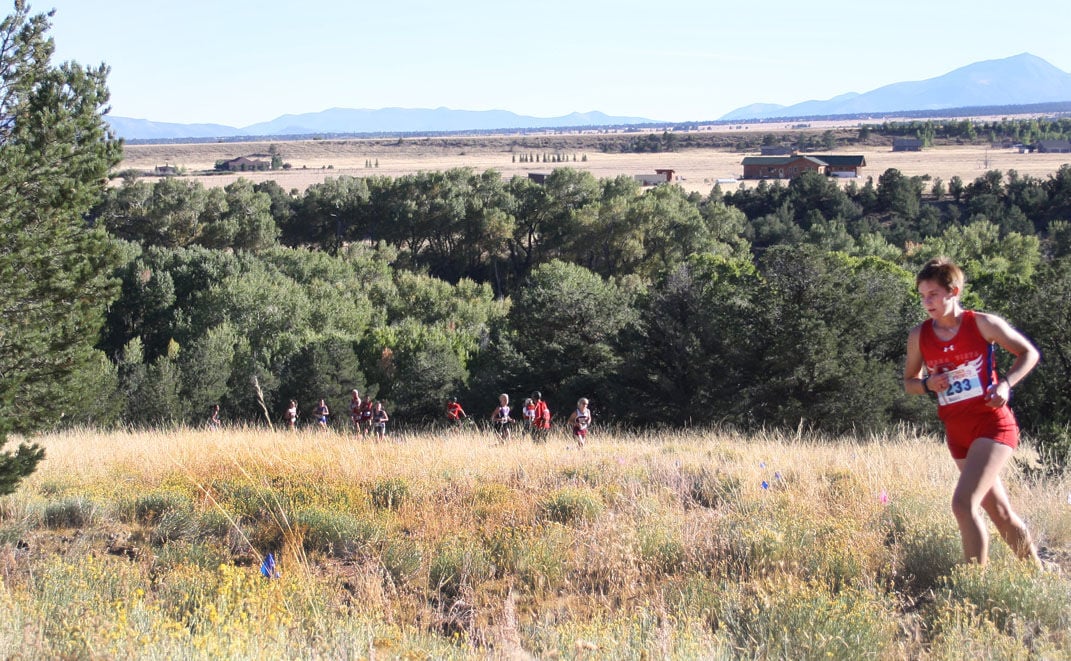 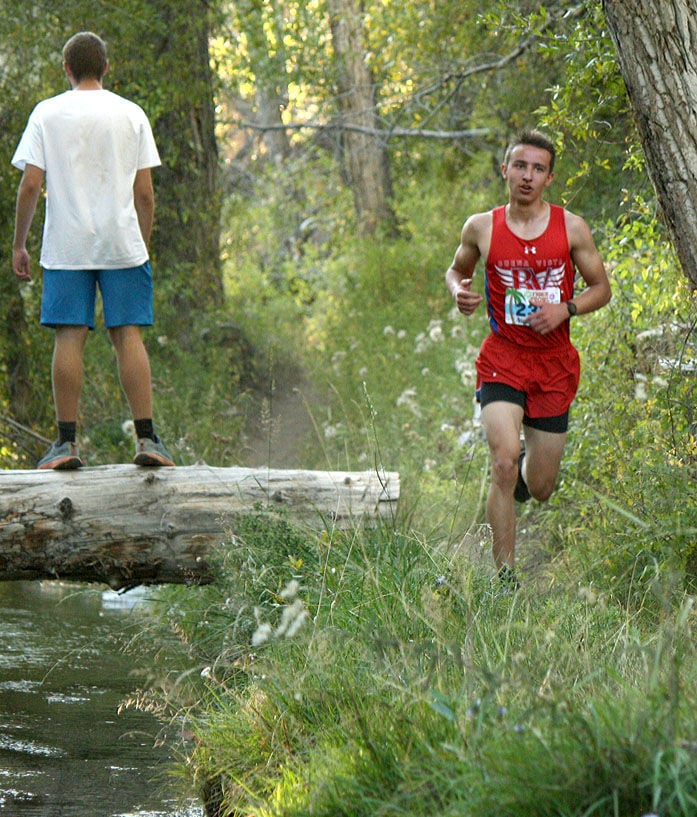 Boys varsity race winner Nate Plotner maintains a significant lead at the end of the creekside leg of the trail. He won this year’s BV Classic 5k in 19 minutes, 10.4 seconds.

Boys varsity race winner Nate Plotner maintains a significant lead at the end of the creekside leg of the trail. He won this year’s BV Classic 5k in 19 minutes, 10.4 seconds.

The Buena Vista Classic high school cross country meet was held for the first time at McMurry Ranch in Nathrop Tuesday and BVHS boys and girls varsity teams both earned wins at the inaugural event.

Molly McMurry placed second for the Lady Demons with a time of 23 minutes, 42.5 seconds and Nate Plotner took first place in 19:10.40.

The start and finish lines were set away from the main road, U.S. 285, by over a mile.

“It’s primarily flat. There’s some hills out in the distance there and then some really fun stuff down by a little creek in the shade,” she said while her team gathered under their tent for a pre-race strategy talk.

“Julia just kept saying ‘The kids are going to have a blast up there,’” said Ken McMurry. He said they had considered a double-loop course closer to the road that would have been more spectator-friendly.

“She kept saying that it’s not about the spectators, it’s about the kids,” he said.

“It’s the perfect temperature,” said assistant coach Adam Fuller. “We’ve always kind of raced in the heat of the afternoon. So this seems to be a cooler temperature. Maybe it’s because of my short shorts.”

Indeed, the weather could hardly have been fairer for the blitzed out pace of a 5k, with sunny skies, light breezes and temperatures riding a bit below 70 F.

From the start line the course struck west along a ranch road. Approaching the first mile marker the path veered right up what racers were calling Doom Hill.

After gaining some elevation, runners completed the out portion of the course on a path along the side of a steep bank before dropping down into the creek basin to race back east.

Merciful shade and gurgling water guided the athletes back to the ranch road for a flat-out finish.

“It was a lot of fun. One of the most fun courses we have run this season,” said Plotner. “Hard, hilly and dusty.”

“It was a really pretty course. I enjoyed it,” said 4th place finisher and Lady Demon Mallory Salazar.

Ben Lague, another Demon, took second in the boys race, finishing in 20:42.6 and edging out the third place finisher by just over 4 seconds.

“I did pretty good. Left it out there, so that was pretty good,” he said.

Molly McMurry had the homiest of courts, having herself been reared around the ranch. Coach Fuller said she and Salazar both had grown up running around the grounds.

The final meet of the regular season takes place on the home turf of the BV Classic’s second place finishers, Salida.