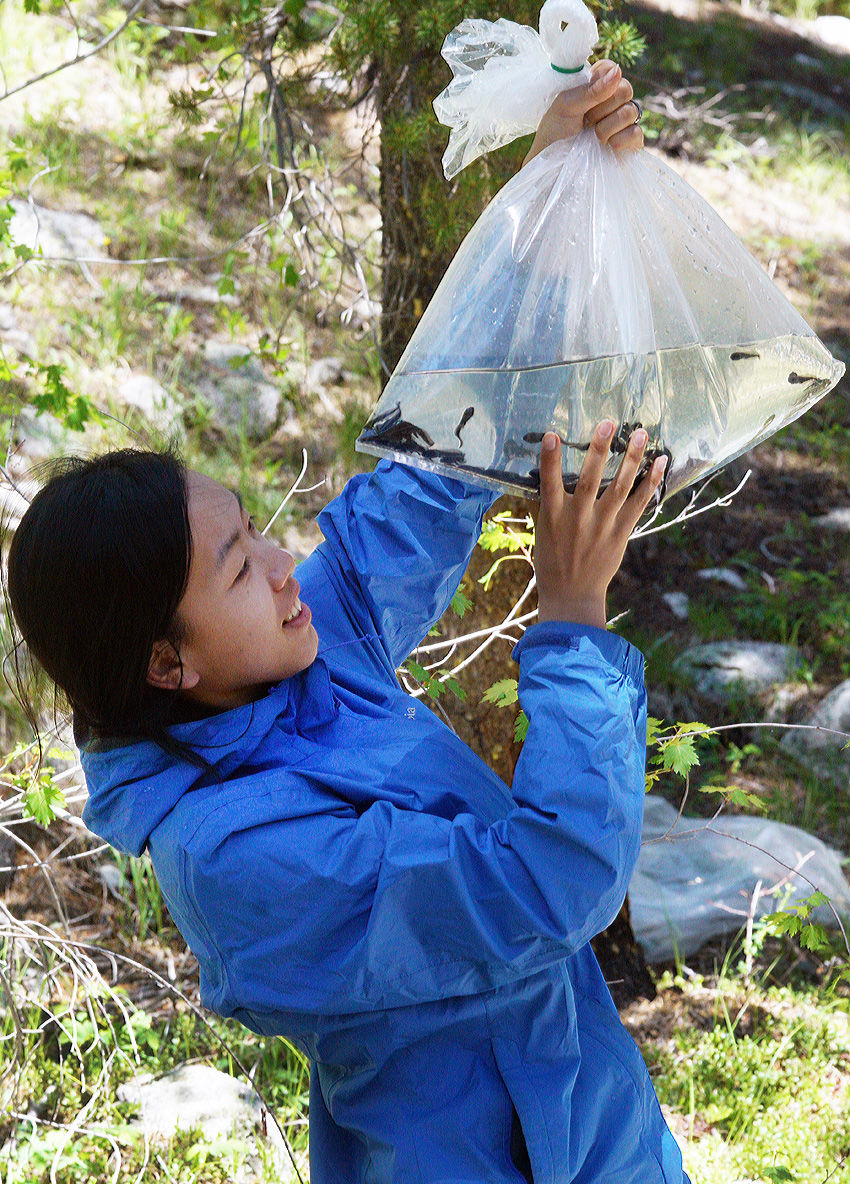 Melissa Chen, a PhD student at the University of Colorado Boulder, examines a bag of tadpoles that will soon metamorphose into Boreal toads. 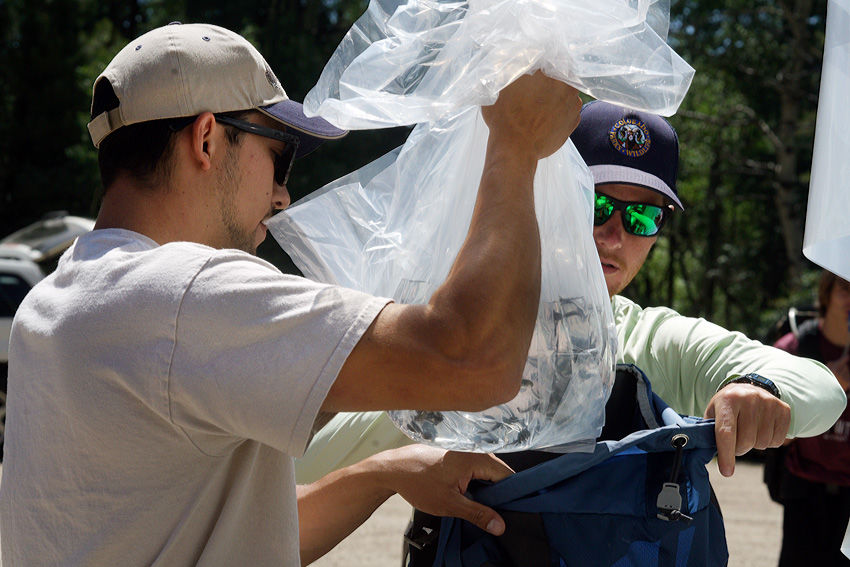 Daniel Garcia, a technician at the Native Aquatic Species Restoration Facility in Monte Vista, helps CPW’s Mason Wadley pack up a bag of tadpoles to hike up Brown’s Creek to a historic breeding ground of the endangered Boreal Toad. 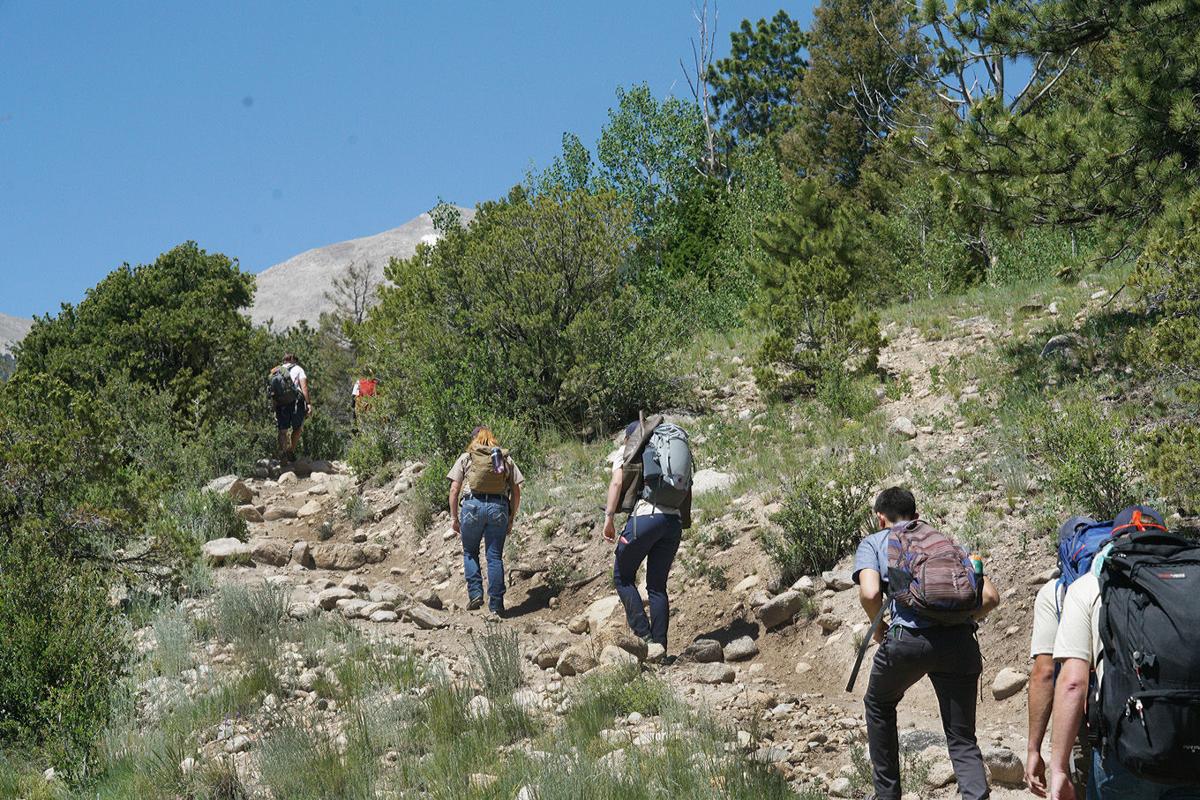 A group of volunteers hike up the Brown’s Creek Trail, carrying roughly 20-30 pounds each of water and toads. 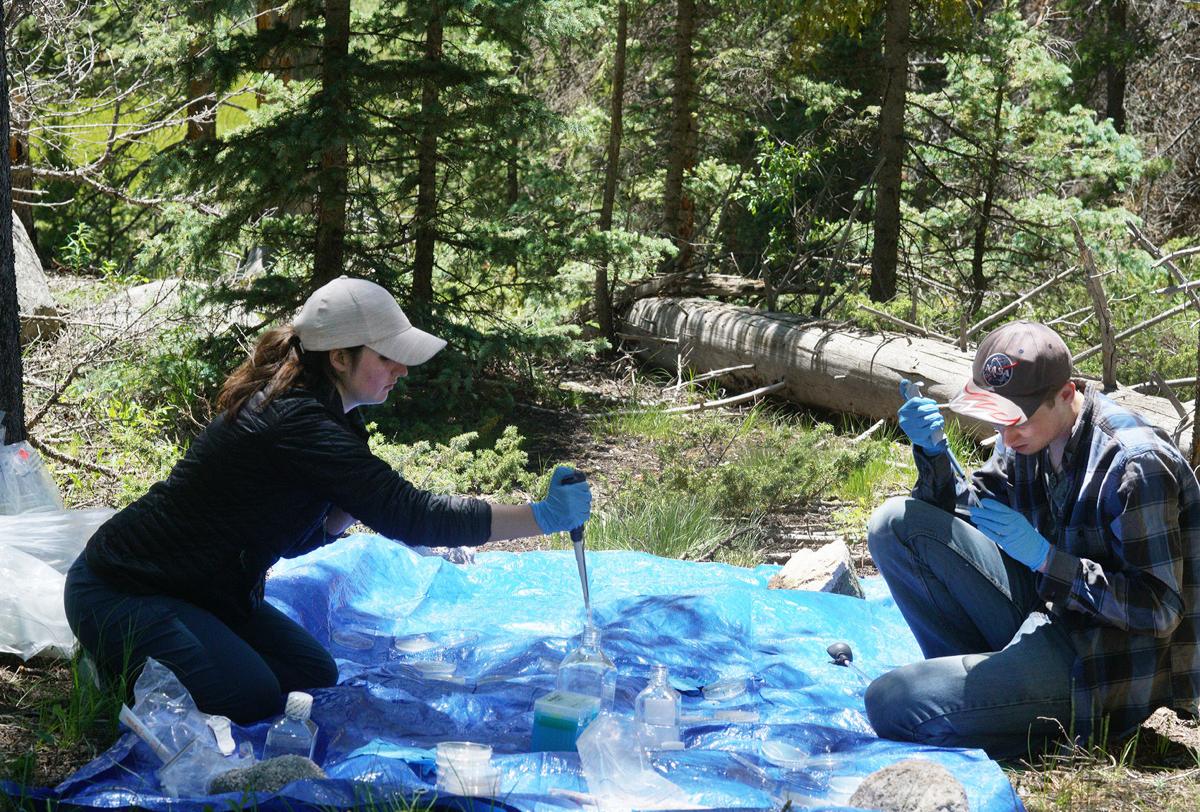 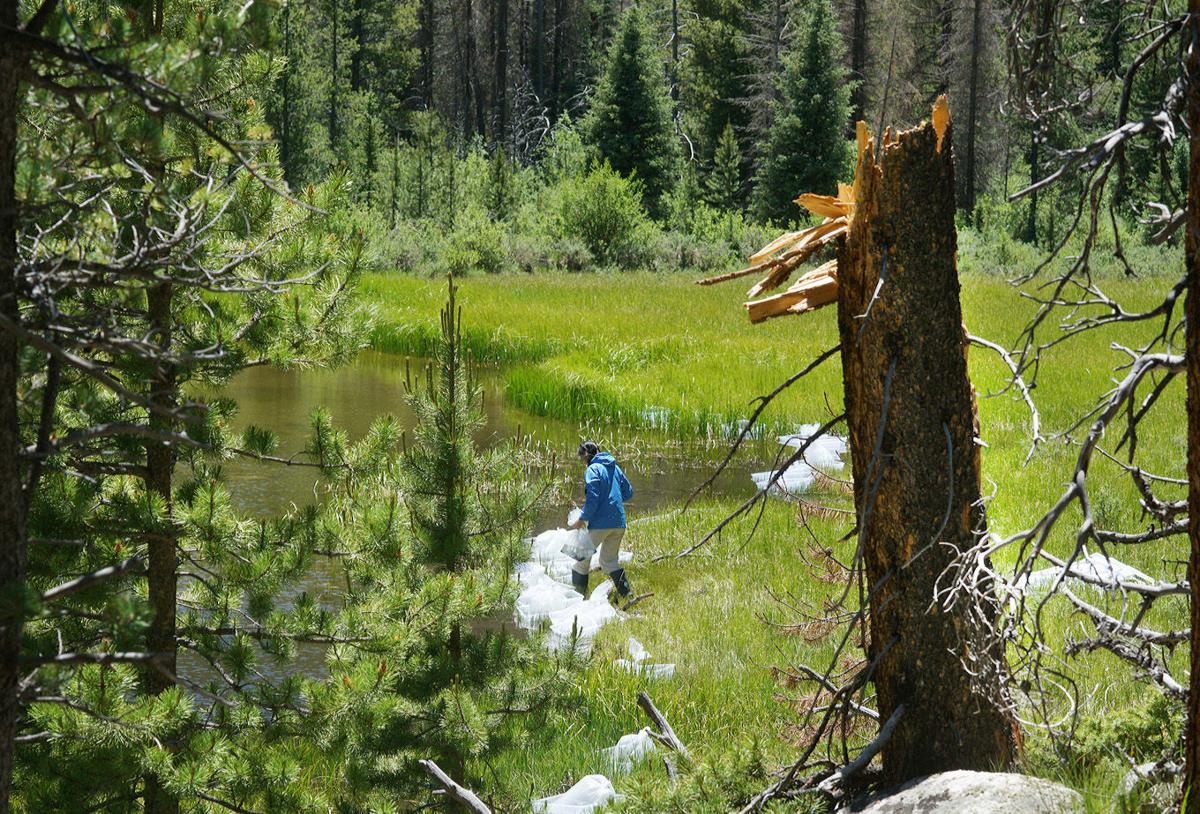 Melissa Chen moves the tadpoles to the wetland area.

Melissa Chen, a PhD student at the University of Colorado Boulder, examines a bag of tadpoles that will soon metamorphose into Boreal toads.

Daniel Garcia, a technician at the Native Aquatic Species Restoration Facility in Monte Vista, helps CPW’s Mason Wadley pack up a bag of tadpoles to hike up Brown’s Creek to a historic breeding ground of the endangered Boreal Toad.

A group of volunteers hike up the Brown’s Creek Trail, carrying roughly 20-30 pounds each of water and toads.

Melissa Chen moves the tadpoles to the wetland area.

For decades, Colorado’s only toad dwelling in high mountain wetlands has been one of a number of amphibians to experience dramatic population declines due to a skin fungus.

The Boreal toad, once common between 7,000 and 12,000 feet in the southern Rockies, is now listed as an endangered species in Colorado and Wyoming.

Aside from factors like habitat loss, CPW said, the declines in Boreal toad populations may be related to a deadly disease that comes from an infection by a fungus called Batrachochytrium dendobatidis, or Bd.

Last Week, biologists with Colorado Parks and Wildlife – and about 40 volunteers – teamed up with PhD students from the University of Colorado’s school of Ecology and Evolutionarry Biology to test a new method that may improve the toads’ chances of making it through metamorphosis from tadpole to mature toad without contracting Bd.

CPW volunteers, as well as volunteers from Pike National Forest, the Bureau of Land Management and the Denver Zoo, packed in about 5600 tadpoles to a marshy valley off the Brown’s Creek Trail, there CU PhD candidate Tim Korpita and his team treated the young toads with a bacterial solution dubbed Purple Rain.

The tadpoles were originally found as eggs in wetlands off North Cottonwood Creek and were reared at the Native Aquatic Species Restoration Facility, a CPW fishery in the San Luis Valley specializing in endangered species, said CPW native aquatic species biologist Paul Foutz.

When the tadpoles pulled up to the trailhead of Brown’s Creek trail on the morning of July 9 in two large tanks on the back of a white Parks and Wildlife pickup truck, they were on their way home to an ancestral breeding ground for the Boreal toad.

Volunteers lined up, instructed to keep the largest compartment of their packs empty of any sharp objects as fishery technicians loaded in two plastic bags to each pack – one full of pure oxygen, the other full of roughly 150-200 tiny brown tadpoles swimming in water.

The bags weighed about 20-to-30 pounds apiece.

The toads arrived at a critical juncture in their metamorphosis – many had hind legs, and most would have all four limbs by the next day.

That’s exactly what the CU researchers were looking for – four limbs, meaning the young toads were just on the precipice of their slick, fishy tadpole skin hardening into the bumpy, keratinized skin of a mature toad.

In the metamorphic cycle of toads, these tadpoles were at Gosner stage 39. At stage 46, the tadpoles’ rudder like tail would be resorbed and metamorphosis into a toad would be complete.

“It’s gotta be a trip being a tadpole,” said CU PhD Alex Alexiev, one of the biologists who would be working with the toads to administer the Purple Rain bath. At this point in their life cycle, every day comes with a new transformative change to their bodies.

Before introducing them into the grassy wetlands, pocketed amid steep hillsides below Mount Antero, the team allowed the tadpoles to soak in a “probiotic wash” for 24 hours.

“There’s pretty good evidence that suggests the bacteria living on their skin was protecting against fungal infection,” Korpita said of the toads.

Korpita said that the Purple Rain treatment showed a 40 percent decrease in Bd mortality in the lab.

The MacKenzie lab is now in its fourth year of trying to replicate that laboratory success in the field.

“This is by far the most that we have treated,” he said. In the lab’s past experiments, they have found that the stage of metamorphosis is critical in the effectiveness of the probiotic wash.

One by one, volunteers packed in the bags of amphibians as the team of biologists sorted them by their stage of metamorphosis. The plan was to pack the toads in Tuesday and expose them to Purple Rain Wednesday, but the CU team was prepared to wait if necessary.

At about 4 p.m., Tuesday afternoon, eight tubs of tadpoles that were farthest along in the metamorphic process were introduced to the probiotic solution, while about 20 tubs were placed directly into the wetland.

“On Wednesday around 2:30 p.m. the biologists started releasing the first tadpoles. Again this was based on the degree of development,” said CPW spokesman Bill Vogrin.

“The conditions were so good they developed faster than expected. By about 3:30 p.m., all eight tubs had been released. Tim Korpita, the CU PhD student, expected to spend the rest of the week processing tadpoles, bathing them in Purple Rain and releasing them.”

Purple Rain, so named for its color, is made from bacteria that are native to the area and naturally found on the skin of the toads, but in an increased abundance to help fight against a fungus that has grown in strength itself.

Korpita said that the leading hypothesis for why Bd became such a danger to amphibians like the Boreal toad is that it hybridized when district populations of the fungus were brought together “around the time of the Korean War.”

“It’s a really unique pathogen in that it affects across the amphibian tree of life,” Korpita said.

Since it was discovered in the 1990s, Bd and the disease it causes, Chytridiomycosis, has been implicated in the population decline of about 30 percent of amphibian species worldwide, according to a report in Science magazine published in 2004.