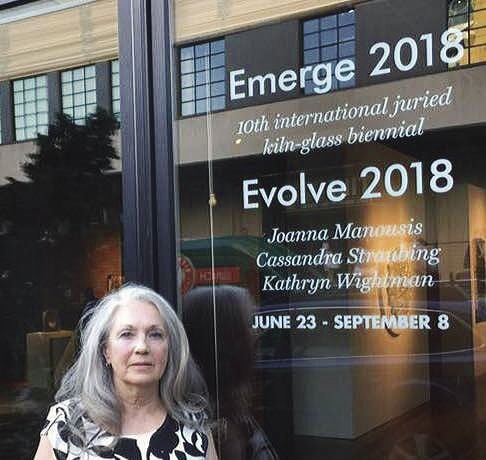 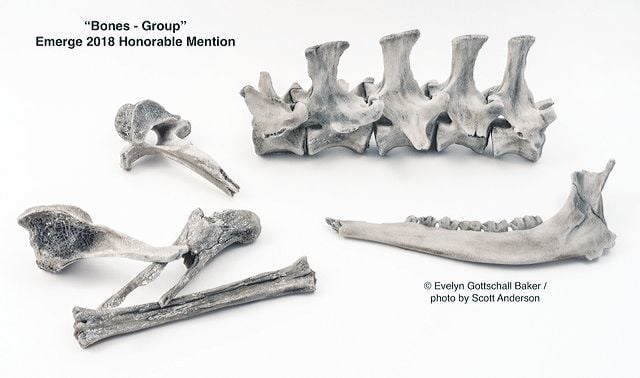 It began with the calla lily. Local artist Evelyn Gottschall Baker created her first kiln formed glass creation of the lily, after taking a fused glass class in 2011 and developing a passion for this glass art technique.

With over 26 years of professional experience in the arts, six of those have been dedicated to the field of glass fusing.

“I strive to capture the intricacies of nature through my observations and attention to detail,” she says.

Her most recent work focuses on using Pate de Verre, in non-traditional ways, to produce three-dimensional glass sculptures. In the past year she has experimented extensively with glass powders, using a unique method of sculpting glass paste into dimensional forms that are fired with the use of molds.

Most recently Baker was one of 42 artists selected out of 300 entrants into the Emerge 2018 Bulls Eye Glass Company’s international competition for emerging artists in the world of kiln-formed glass.

Out of the 42 artists whose work was judged, Baker was the only American to receive an award in the Open Category. Her sculpture of “Bones,” was one of three honorable mentions, with only three other artists placing gold, silver and bronze for the kiln formed glass technique.

“I was so honored and delighted,” Baker says. “I hope this is a jumping off point for me, and that it might open doors for residences and study in glass institutions. This honor gives me a new appreciation of the responsibility that comes with winning an award like this.”

Baker has only been developing her skills in the Pate de Verre (“glass paste”) technique for one year. “I’m using an old technique, one that has been around for a thousand years, but with a new twist,” she says. “Pate de Verre is a technique that mixes a plant-based paste with powdered glass. It is put into a mold made from the original object. After it is dry, it is removed from the mold, detail refined and color added. It is then fired. In my work, I have experimented extensively in glass powders, developing a method of sculpting glass paste into dimensional forms that are fired without the use of molds.”

She says that she began experimenting with the calla lily project.

“It took me 8 weeks to perfect the process. This paved the way for all my future projects. Each project that followed was gradually more difficult that led to the success of my award winning Bones sculpture in the international competition.”

Baker has enjoyed working with glass for years. “I began stained glass work in 1996,” she says. I just love the way light shifts through the day and changes the piece of work.” She says that she is a realist and stained glass forced her to be less so. “But now that I’m doing kiln formed glass, I’m embracing my realist tendencies again.”

In 1994 Baker graduated from George Mason University in Fairfax, Virginia, with a degree in Communications Management. She had been working full time since 1984 for defense industries in the greater Washington D.C. area.

In her work, she was advertising manager and senior illustrator for the Department of the Army and became a test engineer for a large U.S. Defense contractor. “During this time I studied watercolor and oil painting and took classes in stained glass,” she says.

“I believe my background as a test engineer gave me the ability to persist. Working in glass takes persistence, patience and precision. My experience as a test engineer has proved invaluable in shaping the discipline necessary for the methodical, detailed testing required to create the complex firing schedules for this method, as it must account for shrinkage, varying thicknesses and the way in which heat affect individual components.”

She owns a Paragon Pearl 44 kiln and says that kiln formed glass is half science and half art. “If you don’t understand the science, it won’t survive the kiln.”

Growing up on a dairy farm in the small town of Highland, Wisc., with eight siblings, she says also helped her with her future career.

“I learned a great work ethic on the farm,” she says. “And coming from a small town with only 48 graduating seniors in my class, I felt on even ground. None of us was wealthy, yet none of us felt poor. Families were large; in fact families with fewer than eight kids felt weird. And my parents loved us all equally.”

Baker met her husband Keith in 1996, who was working for the Navy on the Joint Chiefs of Staff at the Pentagon. “We moved to Colorado Springs in 1997 where I was assigned,” Baker says, “and we were married there in 2001.”

In 2004 they moved to Buena Vista for a business opportunity. They purchased The Trailhead and owned and operated the business until 2013. “We were so busy with the business, it gave me little time for my art,” she says.

That changed when Baker also owned The Mountain Bohemian on South Main St from 2011-2013. She had an art studio space in the building that allowed her time to immerse back into her creative world of stained glass.

“Creativity has always been an escape from long hours of work. I like the quiet time in the art world.”

Baker says she really enjoys teaching art, and hopes to do more in the future. “Keith and I will be in Glasgow, Scotland this summer where I will teach a 4-day workshop,” she says.

She says that when she submits her work to professional shows, it is very important to submit quality photographs that clearly capture her work.

“My photographer is Scott Anderson. I give him a lot of credit for his beautiful photographs because it is so instrumental in being accepted into a juried show.”

Baker’s work is on display at Rock Run Gallery on South Main Street, and at The Maverick Potter on F. Street in Salida. She can be reached at Everyly@Glassfractions.com or 719-310-3635.

NOTABLE Local artist specializing in fused glass; won a place as one of 42 international artists out of 300 entrants in the Emerge 2018 Bulls Eye Glass Company International Competition for kiln formed glass; earned honorable mention and was the only American to place in the Open Category. Co-owned The Trailhead with husband Keith, 2004-13; owned and operated The Mountain Bohemian 2011-2013; served on the Buena Vista Planning and Zoning Commission 2008-2011; Chaffee Arts member since 2011; chairwoman for council at Grace Church.

FAVORITE BOOK Anything on glass

FAVORITE BUENA VISTA EVENT Fourth of July parade—I love seeing kids ride their bikes in the parade and that anyone who wants to can participate.