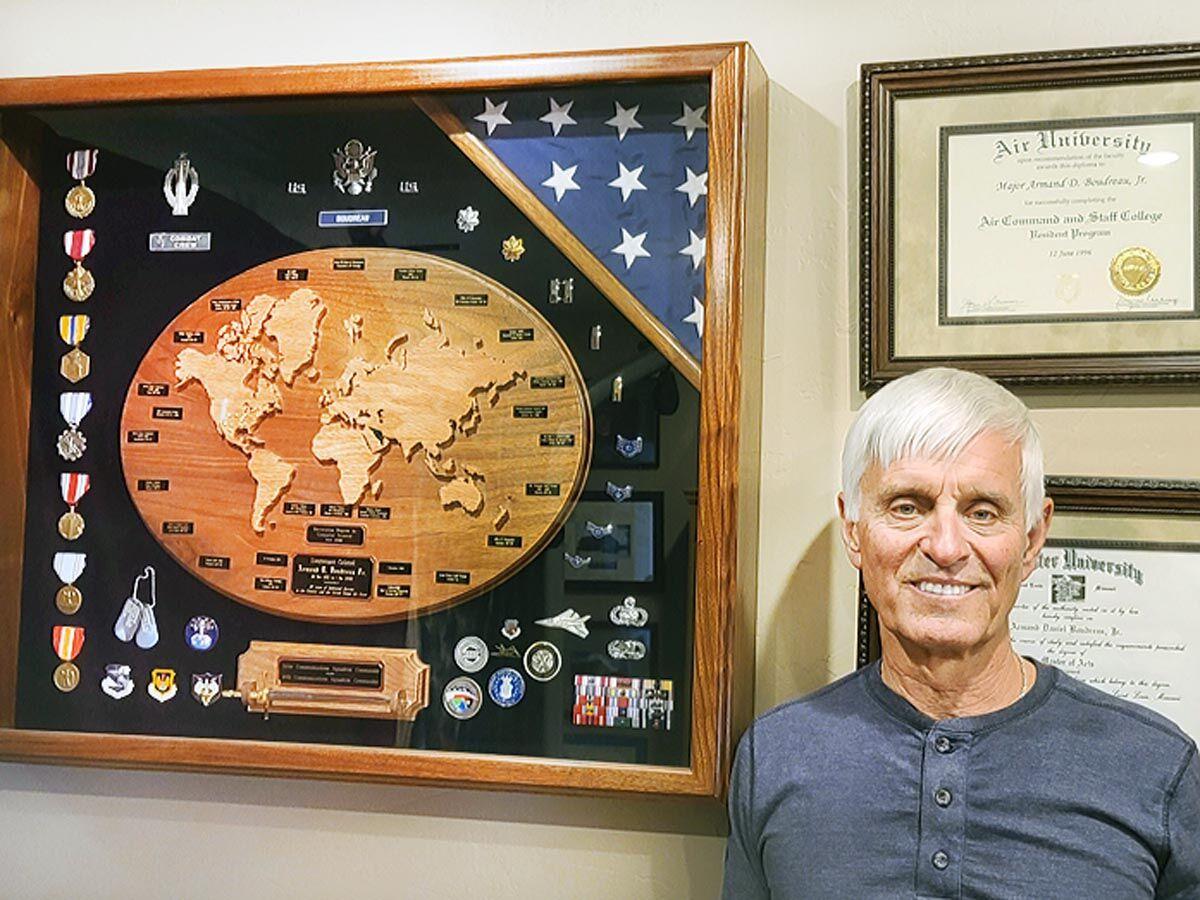 Armand Boudreau stands next to his shadow box, which contains medals, rank, flag, dog tags and unit emblems from his career. The box was flown in an F-117 Stealth Fighter over Bagdad, Iraq in his honor. 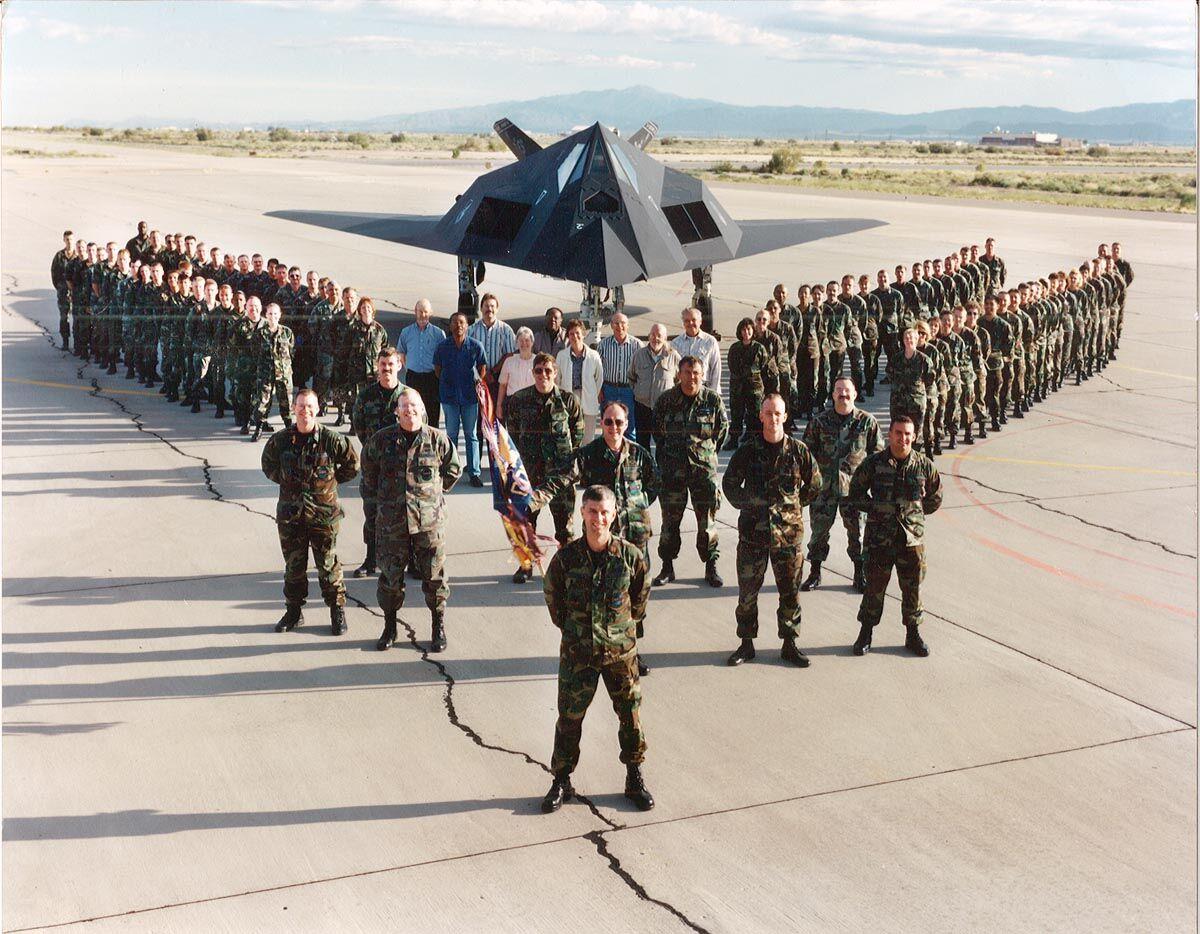 Boudreau poses with his unit and an F-117 from his time in the late nineties as Commander of the 49th Communications Squadron at Holloman Air Force Base in New Mexico.

Armand Boudreau stands next to his shadow box, which contains medals, rank, flag, dog tags and unit emblems from his career. The box was flown in an F-117 Stealth Fighter over Bagdad, Iraq in his honor.

Boudreau poses with his unit and an F-117 from his time in the late nineties as Commander of the 49th Communications Squadron at Holloman Air Force Base in New Mexico.

Serving one’s country is a family tradition for many Americans. And so it was for Buena Vista resident Armand Boudreau Jr., who said he represented a third, consecutive, patrilineal generation to enlist.

“My dad was in the army for like 20 years and basically he was a soldier till the day he died. I call him a true American hero,” said Boudreau.

Born in Austria at a U.S. Army field hospital where his dad was stationed, he said he grew up an army brat, though he didn’t necessarily intend to follow in his father’s footsteps. But growing up around it certainly rubbed off on him.

Later the armed forces would appeal to him more as an opportunity, as for so many, to acquire an education and see more of the world.

“I graduated from high school. I didn’t even think I was smart enough to go in college. I was working in a textile mill,” he said. “I wanted to get out and get an education somehow. So the military was an avenue to that.”

Boudreau said that he had studied in an industrial arts program in high school. He took the test for all military services, but thought the Navy and Air Force offered the best electronics schools.

“I said let me go into the Air Force. That was a perfect choice for me. It provided me the best avenue to use my skill sets,” he said.

“I expected to go right to Vietnam when I enlisted,” he said. “When I was in basic training, on Christmas Day, I remember watching the Linebacker 2 campaign. It was the end of the Vietnam era. Instead of sending me to Vietnam, they said, ‘You’re going to be a missile guy.’”

So he began his military career in Little Rock, Ark., in the 38th Strategic Missile Wing. Through the 1970s and early 80s, Boudreau would perform operations and development relating to the U.S.’s intercontinental ballistic missile systems. In between these assignments in Arkansas and Illinois, he spent 5 years as a technician working with digital flight simulators on the East Coast.

Then 1985 took Boudreau to Germany and a career highlight command post.

“That was by far the most rewarding and probably the hardest job I had while I was in the military,” he said. “To put it in perspective, you’ve got a 0.05 percent chance of being a commander while in the military, and I did it twice.”

He was still at a relatively young rank at the time.

“I did it as a 2-year captain, which is unheard of,” he said. “It was probably the most exciting thing I had ever done.”

His responsibilities as a commander entailed building a base from the ground up. This included supervising, training and motivating a team of 59 IT/communications personnel and installing one of the first fiber-optic ring systems in Europe.

“It was such an honor to work with some of the best quality, highly-motivated individuals that the nation has to offer. And I truly mean that. Most of the folks that I worked with and had the privilege of leading there were highly motivated and absolutely the cream of the crop,” he said.

His second command post was awarded in New Mexico at Holloman Air Force Base. There he led the 49th Fighter Wing, directing and planning all computer and communications system support for a 6,000-member community.

He finished his Air Force career in Colorado at Peterson Air Force Base, where he received a final promotion before retiring and moving to the private sector.

“I’ve been promoted I think nine or 10 times. The best promotion I ever had was going from enlisted to officer, second lieutenant,” he said. “Having to go through officers’ training school – I describe those as three of the worst months of the your life, but three of the most rewarding.”

After retiring from the military in 2002, Boudreau achieved a doctorate in Computer Science from Colorado Technical University in 2006 and spent several more years working as a system engineer.

Today he lives with his wife off Rodeo Road. He is a trainer for the National Ski Patrol and enjoys bee keeping, woodworking, minding his llamas and goats and visits from his grandchildren.