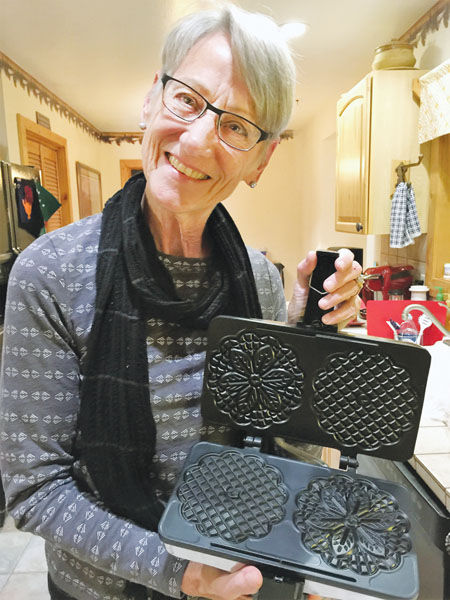 “A colleague introduced me to the art of making pizzelles, and I’ve been hooked ever since. My daughter has carried on the tradition with her family, and every year Jack and I set up an assembly line in the kitchen.” 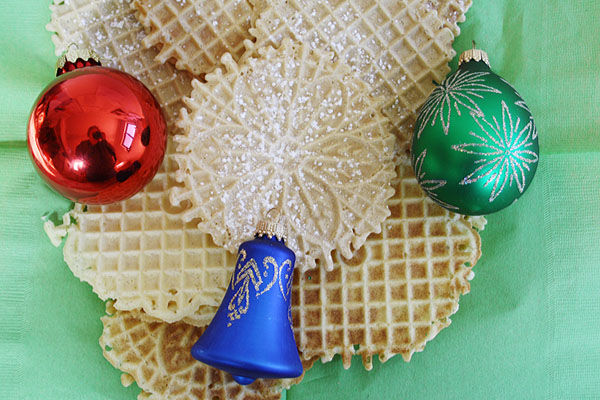 “A colleague introduced me to the art of making pizzelles, and I’ve been hooked ever since. My daughter has carried on the tradition with her family, and every year Jack and I set up an assembly line in the kitchen.”

Holiday traditions often include food, with a blend of regional folklore and international influence.

Louisiana dishes out Creole gumbo, while New England loves a mashed potato crust filled with meats, onions and cinnamon. In North Carolina, it is the Moravian love-feast buns, in Pennsylvania the sand tart cookie while New Mexico serves up empanadas.

For Susan Klinsing and her family, their 35-year tradition has been to make and gift the pizzelle, an Italian waffle cookie.

The dough is a mixture of flour, eggs, sugar, butter and a flavoring of choice, which is then dipped out and pressed onto a pizzelle iron, similar to a waffle iron, Klinsing says,

“A colleague introduced me to the art of making pizzelles, and I’ve been hooked ever since. My daughter has carried on the tradition with her family, and every year Jack and I set up an assembly line in the kitchen. I make the dough, and he handles the pizzelle iron press. Our friends and neighbors love them, and we enjoy hosting holiday parties that always include the pizzelles.”

Klinsing was raised in Golden in an idyllic setting on land that included a creek, meadows and horses.

“My two older sisters and I ran free all day, exploring our environment. This upbringing appealed to my imagination, helped me to develop independence, and the confidence to try anything,” she says. “It gave me a zest for life.”

She says that as a youngster, her family spent time camping in Chaffee County and that was her earliest memory of Buena Vista and the surrounding areas.

After high school, Klinsing chose Western State College for her higher education. “I went to Gunnison so I could ski in Crested Butte,” she says with a twinkle in her eye, “and in that time, I also managed to graduate with a double major in business and business education.”

A few years later, Klinsing found herself a single mother of two children, and for 9 years she met that challenge head-on.

“Those years taught me strength of character, and I wanted to impart that strength onto my son and daughter. I’m so proud of them for growing into independent and successful adults.”

Klinsing says that during her children’s elementary school years, she met her husband Jack while both were teaching in the Harrison School District in Colorado Springs. “Jack and I have had 32 fun years together. We are so much alike, and so very different, but it makes for a wonderful and interesting relationship.”

Klinsing spent 30 years with the Harrison School District and summarizes her years into three 10-year increments. “My first 10 years were spent teaching in the classroom, my next 10 years were as the vocational education director and in my last 10 years I was the public relations director for the district.”

She says that as vocational education director, she helped spearhead the development of one of the first interactive computer video presentations for students.

The program, entitled “21 Attributes for Successful Employability,” was co-sponsored by Bloomsburg University in Pennsylvania, which helped with the technical work and editing while it was filmed in Colorado. Klinsing says she traveled around the world for several years to promote the program, making about 150 presentations.

In addition to her work on the vocational education project, Klinsing spent nearly 10 years as a high school gymnastics judge with Colorado High School Activities Association.

Skiing is still a big part of her life.

“Jack and I love to ski and spend the winter months enjoying that,” she says. “But, in the summer months, I love to volunteer for the Buena Vista Chamber of Commerce and Visitor Center.”

She says that when retirement drew close in 2001, she and Jack took a road trip through the West to look for a place “that would call our names.”

As the list narrowed, they drove over Trout Creek Pass, “and even though we had made that trip many times, suddenly we realized, this was home. It was there all along. In that moment we knew we would do whatever it took to move here.”

Buena Vista is more than just home to Klinsing.

“My solace is in the mountains. I have learned to calm my Type A personality with meditation. Sitting on my back deck and gazing up at the mountains is incredibly peaceful. It is the serenity in this beautiful area that I embrace.”

FAVORITE QUOTE “Far and away the best prize that life offers is the chance to work hard at work worth doing.” – Theodore Roosevelt, Labor Day Address, 1903.

FAVORITE BUENA VISTA EVENT All of the events sponsored by the Buena Vista Chamber of Commerce and Visitor Center.

FAVORITE THING ABOUT BUENA VISTA My solace is in the mountains. I love the people here, but I especially love the serenity of the mountains here.