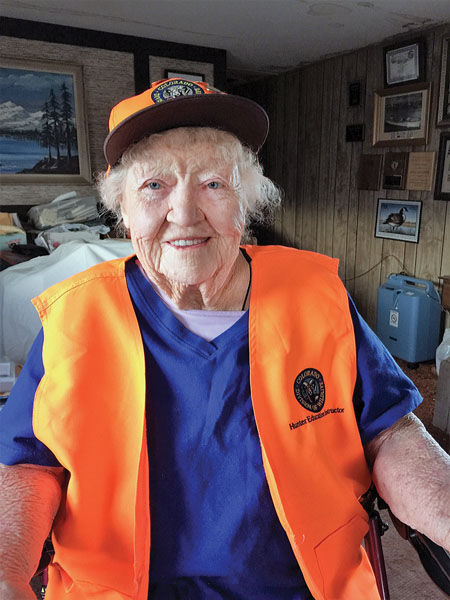 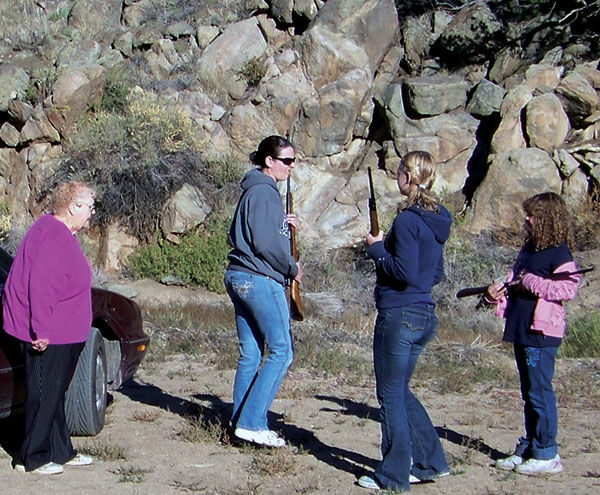 Annie Oakley was a “renowned markswoman and star who worked for years with Buffalo Bill’s Wild West Show” in the late 1800s.(Wikipedia.)

“I got my first elk on Mount Harvard,” she says proudly.

While her husband Harry worked at Climax Mine for 30 years, June was a housewife who raised two daughters and led a full life in the sportsman’s club.

The club, under the combined leadership of Smith and her husband, hosted registered shotgun trap shoots, helped to set up a rifle range, and offered archery competitions. “In fact,” Smith says, “we would haul in hay bales for the competitions and our own Buena Vistans, Fred and Norma Rowe and family, won the Archery State Championship.”

Smith says that for a time, they used the upstairs of the old Pearl Theater for an indoor .22 range, as well as a place to practice archery. The club also hosted buffalo barbeques for a number of years.

“We won many awards for our shotgunning,” says Smith. “We were highest in our classes of B and C. We competed in many towns throughout the state including Cortez, Craig, Grand Junction, Denver, Colorado Springs and also competed in the registered state shoot in Wichita, Kan., though we did not win awards there.

“However, we have received so many awards over the years, they could fill the wall. My husband’s biggest pride was when he won a silver tea set from a registered trap shoot in Delta. The most important award for me was from Hunter’s Education.”

In addition to their marksmanship, Smith also enjoyed gardening.

She says, “In the 1970’s my husband and I raised big gardens and won many ribbons for our vegetables in the local home and garden shows.

“My girls raised strawberries and sold them to the local people. This helped them earn money for their own school clothes. We had big gardens every year through that decade.”

Smith was born in Hotchkiss and graduated from Paonia High School in 1948. In her junior and senior year in high school she dated Harry’s brother, during which time she was also a Girl Scout leader, and helped out in the first and second grades at the elementary school.

“Then, I got together with Harry after my freshman year of college, where I was studying teacher education, and married him a year later.” Rather than finishing college, she married Harry.

“Harry was a hard worker. He worked at his grandfather’s mine, The Hawk’s Nest,” from the time he was a sophomore in high school to help pay the family’s bills. In 1951, Harry became a staff sergeant in the Army in Korea.

“It was a hard time for me, because he was among the missing at Heartbreak Ridge. We contacted the Red Cross and didn’t get any information. I was really worried because he was one of the mortar men. But, he eventually returned safe and sound, but never talked about his experience there.”

The couple moved to Indiana for about 9 months, at which time they lived in an apartment in the home of Daniel Boone’s great, great-grandmother.

“We shared a kitchen and bathroom with Mrs. Boone,” says Smith.

During this time, Smith also attended a 6-month program at the International Business School. “But I never really used those skills in the work force,” she says.

In 1953, they moved to Leadville, while Harry worked at Climax. “But 3 years later we moved around to several different working ranches in Chaffee County. We raised hogs, calves, milk cows and chickens.”

They settled into the ranch of the Heckendorf place and lived there until 1967.

“Our daughters were born during this time and in those days we would get horrendous snowstorms. We had an outhouse, and no indoor plumbing during our time there. Harry had to build steps over the snowbank to the outhouse, because the snowdrifts were as tall as the eaves of our house.”

Smith says that they had six milk cows.

“We would milk the cows and separate the milk through a separator to produce the cream. Then we would take our 5-gallon can of cream to the Depot—which was just across from the White House Liquor Store, where The Chaffee County Times office now stands – and it would be shipped off to Pueblo.

Smith recalls one of her favorite memories of her time on the Heckendorf Ranch. “One day a white bull elk walked into the pasture. Pure white. Beautiful. Someone took him down one day, but I’ll never forget how magnificent he was.”

After moving into the town of Buena Vista in 1967, they also started their tree trimming service.

“It wasn’t actually a formal business, but people in town knew we were available to help trim trees where needed. We often traded our service for other jobs we needed done.

“There was one time that Harry got stung 81 times when he sawed into a beehive in a tree by the chamber of commerce. We had been asked to help by Mayor Chet Loback because the town was backed up and we were on the brink of the tourist season.”

“He fell through the ice when he was trying to retrieve a friend’s sled,” she says. “Both legs froze and while his left leg healed, his right leg had to be amputated by May.”

Smith says that Harry was not easy on the prosthetic and not much would slow him down.

“One time he went up in a cherry picker but then climbed from 45 to 60 feet to do some trimming. When he was coming down, his prosthetic came unclasped and his leg fell off. So, when he came down, Dennis Giese duck-taped his leg back on and then he climbed back up the tree to finish the job.”

Teaching hunter safety was a passion of Smith.

“I enjoyed all those years immensely,” she says. “I especially enjoyed putting on demonstrations. We would fix dinners for the registered trap shooters from all over the United States.”

She says, “And I’m registered for an all-day class coming up on April 8. I’m so passionate about hunter’s education.”

NOTABLE Hunter education instructor for 42 years; together with her husband Citizens of the Year many years ago. They were members of the Buena Vista Sportsman Club since 1957 and president and secretary for 32 years; rode in the July Fourth parade for 2 years as Betsy Ross sewing the flag and for another 2 years rode a flatbed truck as a member of a patriotic band, playing the clarinet.

FAVORITE MOVIE “A Love Affair to Remember,” with Cary Grant.