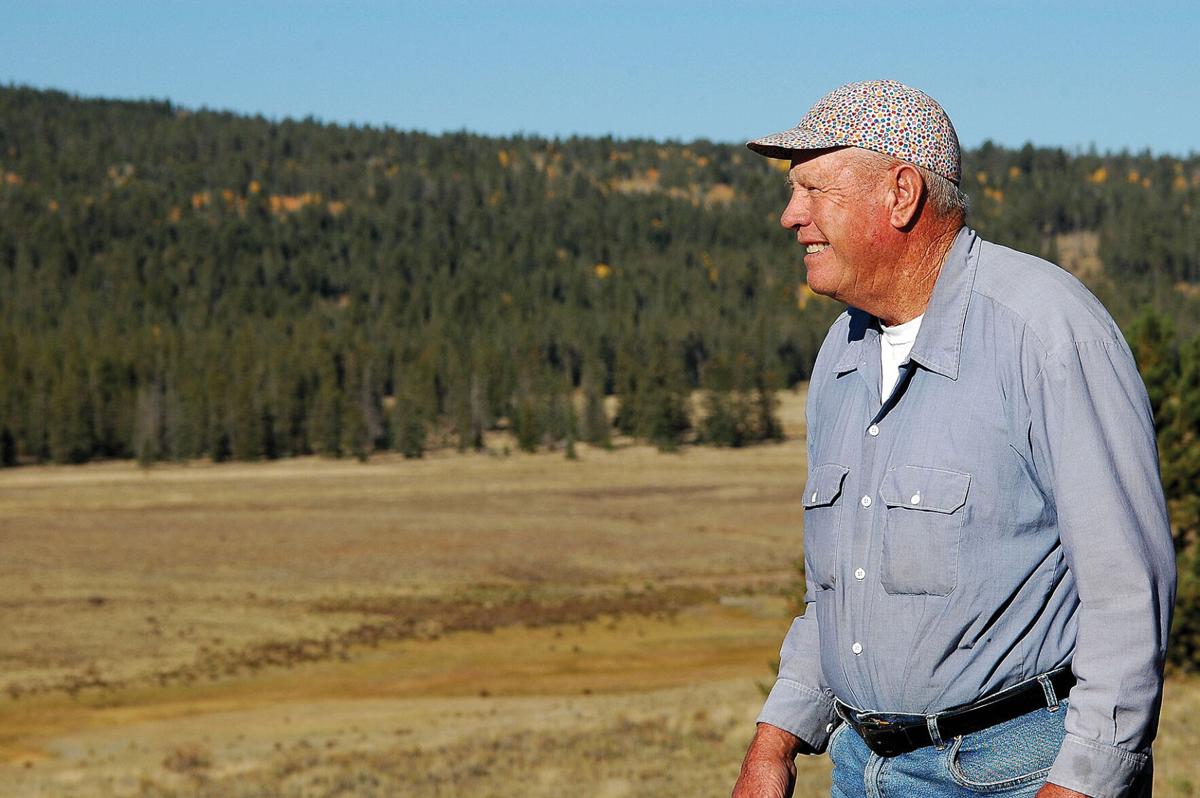 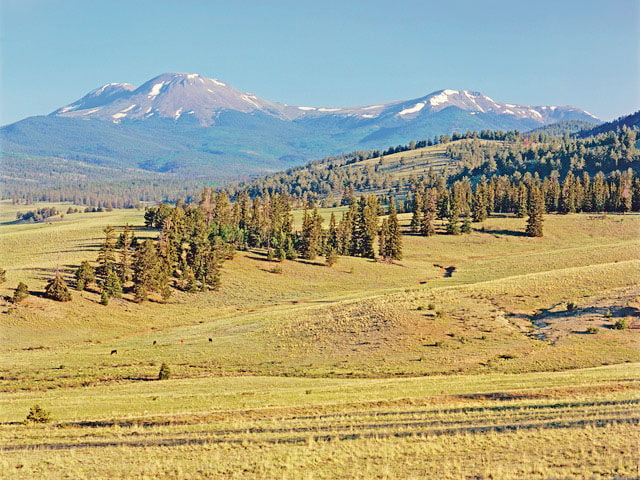 Colorado’s diverse landscape has a rich natural and agricultural heritage that fuels the economy, a new analysis by Colorado State University researchers of state investments in conservation easements found, The Times reported July 26, 2017. The 507-acre Chubb Park Ranch on Trout Creek Pass (pictured) was protected through the Central Colorado Conservancy by longtime rancher Joe Cogan in 2009. 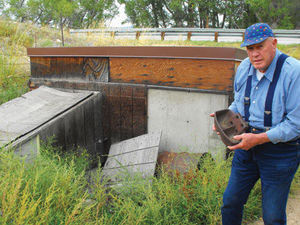 Joe Cogan holds a water wheel bucket outside his hydroelectric plant near his home along U.S. 285, in October, 2015. 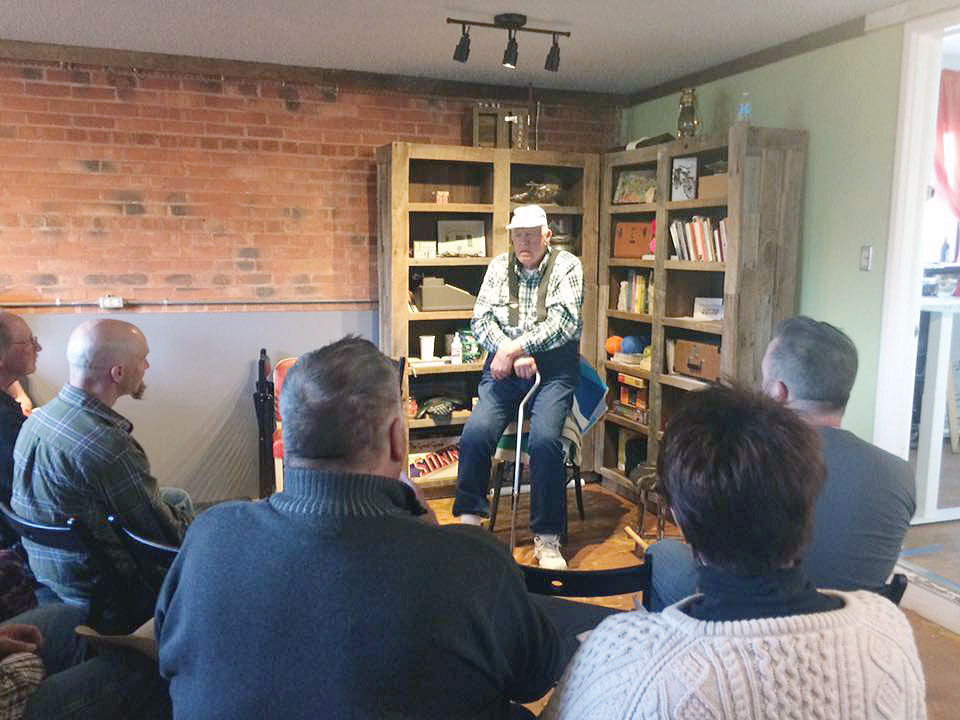 Joe Cogan spins a tale, The Times reported April 19, 2017, during a Storytelling at the Watershed event in Buena Vista. 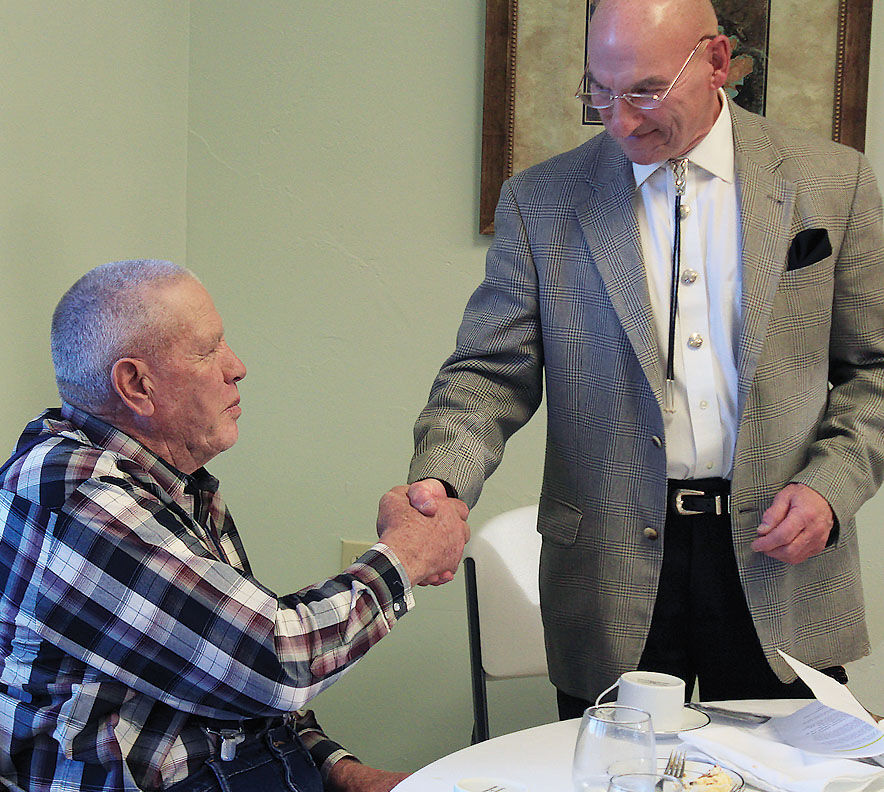 Colorado’s diverse landscape has a rich natural and agricultural heritage that fuels the economy, a new analysis by Colorado State University researchers of state investments in conservation easements found, The Times reported July 26, 2017. The 507-acre Chubb Park Ranch on Trout Creek Pass (pictured) was protected through the Central Colorado Conservancy by longtime rancher Joe Cogan in 2009.

Joe Cogan holds a water wheel bucket outside his hydroelectric plant near his home along U.S. 285, in October, 2015.

Joe Cogan spins a tale, The Times reported April 19, 2017, during a Storytelling at the Watershed event in Buena Vista.

Several months ago, Tom Crocombe was in the kitchen of his home when the back door swung open.

It was Joe Cogan. Like Tom, Cogan was born and raised in Chaffee County. Tom and Joe went to school together in a graduating class of 14 back when grades 1-12 were all taught out of the former county courthouse, now the Buena Vista Heritage Museum.

They played six-man football together. Tom worked in the lettuce fields as a young boy, and Joe worked on the vast ranch south of town that his family had maintained since the 19th century, around the time that Alsina Dearheimer was dreaming up a pronunciation of a Spanish phrase that would confound newcomers for decades to come.

Joe brought Tom a copy of a book of history he had written about the Cogan family and ranch.

“He had a book that he had written about his dad,” Crocombe said. “We probably talked for about 4 or 5 hours about, you know, the old days, back in the ‘50s, playing football.”

“I can’t think of anything negative about Joe,” said Suzy Kelly, who as the historian of Buena Vista often looked to Cogan’s encyclopedic knowledge of the area running three generations deep, “except that if you wanted to have a quick conversation, it was impossible.”

Cogan, who passed away last weekend at 86 after a lifetime of ranching in the Upper Arkansas Valley, left a legacy of conserving both the natural landscapes and rich history of Chaffee County.

“He was a rancher first and foremost. He knew everything about ranching, irrigation, water, water rights in this area. He was willing to share with new people, he was very generous,” said Kelly, who attended school in the courthouse a few years behind Cogan, and has lived in Chaffee County for most of her life.

“There’s probably not any better environmentalists than ranching and farming people, because they have to work with it all the time.”

Kelly added, “He was a great father, grandfather, and now great grandfather and very loyal and dedicated to all his siblings and family. He had four sisters and three brothers.”

In 2009, Cogan donated 507 acres of his property in Chubb Park to the Land Trust of the Upper Arkansas (now the Central Colorado Conservancy), protecting it from development in perpetuity.

“He was just like most of us who have lived here for a long time, 70, 80 years, who don’t really like seeing so much development going up everywhere, because it changes the character of your county,” Kelly said.

Allio also knew Cogan in her capacity on the board of the Upper Arkansas Conservation District, noting Cogan’s focus on using sustainable ranching practices to mitigate the effects of erosion due to loss of topsoil.

“Part of Joe, too, was trying to keep the lands that were in his stewardship or care, keeping that connected with ag, and thinking about how he was going to do that for generations to come,” Allio said.

“If we don’t manage our lands well and we lose that topsoil because we’ve lost those native plants that keep the soil in place, we just have degradation of our land, and Joe really got that. He did a lot of work, especially around Trout Creek Pass,” Allio said. “He went to great lengths, really above and beyond, to take good care of that land and put into place different practices that would protect that soil.”

Cogan would use low-tech methods – like rocks and downed trees, in strategic places to slow down the flow of water in places where it can build up a lot of energy, cutting excessively into the earth.

“Just managing the grazing on his land, putting these structures in place to slow and spread the water out, dissipate the energy to protect the soils from erosion,” Allio said.

His tendency for storytelling also made him something of an educator on the topic, she said.

“He wasn’t somebody who would preach to you about what you should be doing on the land, but he led by example and was certainly quick to share a story about the health of the land and how we were connected to it and the things he was doing to help protect it and how important that was,” Allio said. “He didn’t want a lot of recognition, but was definitely one to share his wisdom and knowledge through the stories he shared.”

“He was always happy. Drove an old Model A back and forth to school,” said Crocombe. “We couldn’t all fit in one car, but we’d see each other on the evenings and visit with each other and talk and have a good time.”

Back then, Crocombe estimates that there were about 400 people in the vicinity of Buena Vista.

School dances were held in the old gymnasium next to the courthouse.

“Everybody worked. I think I was 8 years old when I was working in the lettuce fields,” Crocombe said. “Joe worked on the ranch from the time he was a little bitty kid.”

Later in life, Crocombe would go fishing on the river as it flowed through the Cogan ranch.

“I’d go down, I’d see him, talk to him. I’d call him up and say, ‘I’m coming down to fish’ and he’d say ‘You know the protocol,’” Crocombe said. “I’d park my Jeep in his yard, and he had a culvert that went across the river. I’d walk out in the middle with my pole and fish both sides of it.”

Crocombe said that Joe was “just a happy-go-lucky guy. That’s all I can tell you.”

Kelly said that Cogan’s passing represents another loss in the generation that remembers that bygone time in Chaffee County.

“They didn’t truck their cattle, when he was a kid. They drove them into Bassam Park on horseback. He could go back into all kinds of history,” Kelly said. “And he had the combined memory of his grandfather and his father, too.

“There were women that I could call: Ada Morrison, Millie Crymble,” Kelly said. “It’s really sad that we’re just losing them. I feel bad, because what I know I learned from all these people … there’s just a few of them left.”

“The whole intention was to highlight the older generation of ranchers in our valley from some of the really long-time ranches and give people an opportunity to hear their stories,” said Andrea Coen, the executive director at Guidestone.

Tickets for the event sold out.

“I think there are a lot of people who live here now who don’t really know that history, but are really compelled by it because they love this open-lands agricultural landscape, but they don’t necessarily know the stories behind the families,” Coen said. “They each took a turn, about 10 to 15 minutes per person, just chatting about the history or growing up here and their family’s ranch and when it was established. There was definitely some interplay, because they all know each other really well, so there was definitely some joking around and teasing.”

Coen said that plans for a similar 2019 gathering fell through, and Guidestone hasn’t been able to do any events in 2020, but she hopes to revive the panel as an annual event.

“I was really intending on this being an annual event, of highlighting these ranchers and their stories as part of what we do annually at the homestead,” Coen said.

Joe left that copy of his book with Tom Crocombe. He had signed it, too.

“It said, ‘To Tom and Wynona, my friends,’” Crocombe said. “And that’s just how he was. Everyone was a friend of his. I don’t know of anyone who didn’t like Joe Cogan. If they did, I’d have cleaned their plow, probably.”