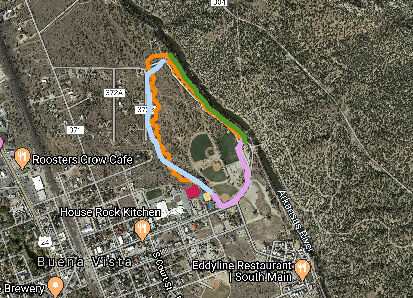 Map of the Buena Vista River Park area shows the planned locations of several projects to be included in a grant proposal improving recreation opportunities in the area, as well as the future site of a Boys and Girls Club campus. 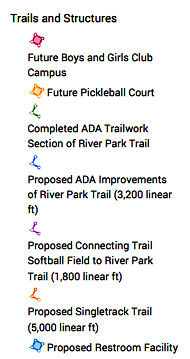 Map of the Buena Vista River Park area shows the planned locations of several projects to be included in a grant proposal improving recreation opportunities in the area, as well as the future site of a Boys and Girls Club campus.

The Buena Vista board of trustees enthusiastically gave the go-ahead to the BV Rec department’s pursuit of a Great Outdoors Colorado grant that would assist in funding the creation of a multi-generational facility at the River Park including long-awaited pickleball courts, ADS-accessible trails and additional singletrack opportunities.

“In years past, we may have gone for just one of these entities, but going forward, GOCO wants to make sure it’s a collaboration between users, not just one user group,” he said.

Richmond said that he and other stakeholders in the project, the Peak to Peak Pickleball Leage and the Buena Vista trails advisory board, were eyeing submitting a Request for Proposal for GOCO’s Resilient Communities Grant in October.

Local match funding estimates are $40,000 from the Peak to Peak league, $20,000 from Chaffee County and $20,000 from the town’s Conservation Trust Fund, as well as $20,000 worth of in-kind labor from the Buena Vista Public Works Department.

Combined with the estimated value of the town-owned land that would be used for the project, the local match of $340,000 would be well above the 10% minimum required by GOCO for the grant.

This year, GOCO is looking for collaboration in the grants it approves, Richmond said, and yet another pending project that would work synergistically with this one is the Boys and Girls Club’s interest in building a new facility on land leased from the town just north of Avery-Parsons Elementary School – and just east of the River Park facility.

“There’s some great potential for collaboration here between the Boys & Girls Club. They would build a facility which would be a gym with offices surrounding the gym, which they would use during their (3:30-7 p.m) programming hours,” Richmond said. “They’re willing to open that facility to BV Rec needs and community needs during the day. So the kids could jump onto the pickleball courts and play pickleball, pickleball participants could jump out into the gym and play indoors during the day.”

Richmond said, “The goal of this future multigenerational campus is to, one, deal with our huge overcrowding issues that we have on our tennis and pickleball courts … but also to show collaboration between the Boys & Girls Club and our trail system and the Boys & Girls Club and our pickleball courts. (It also will) give people an opportunity also to hike and bike and loop around an area that’s very well needed.”

Hungry bears look for 20,000 calories in your back yard