More than 30 people involved in the project to pave Cottonwood Pass, from Chaffee County, Gunnison County and the federal government, span the road – now the second highest paved mountain pass in the country – Thursday for a ribbon-cutting ceremony. 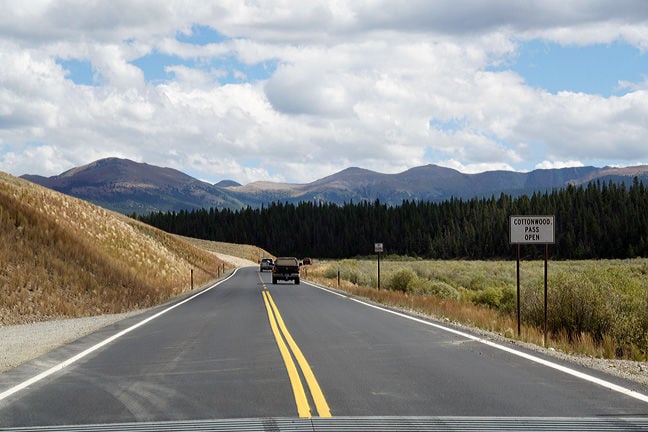 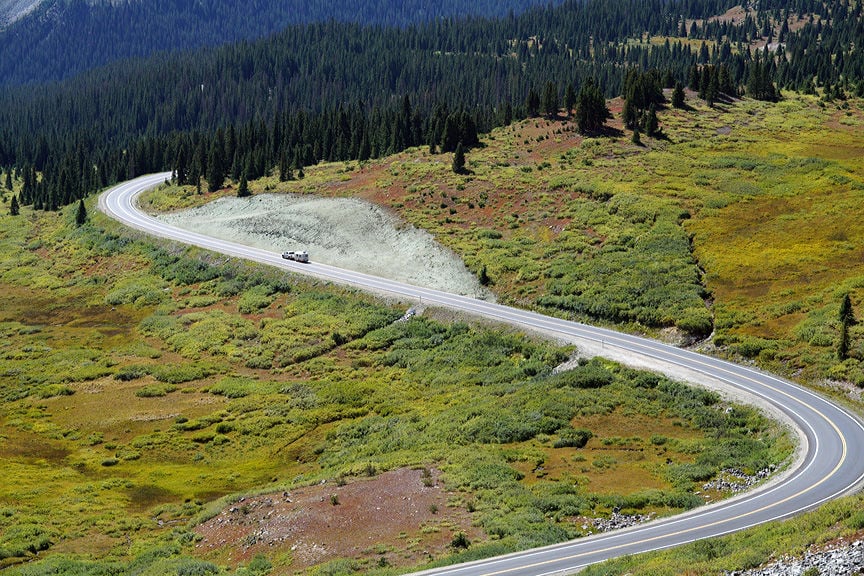 A lone camper heads down the east side of Cottonwood Pass Thursday. 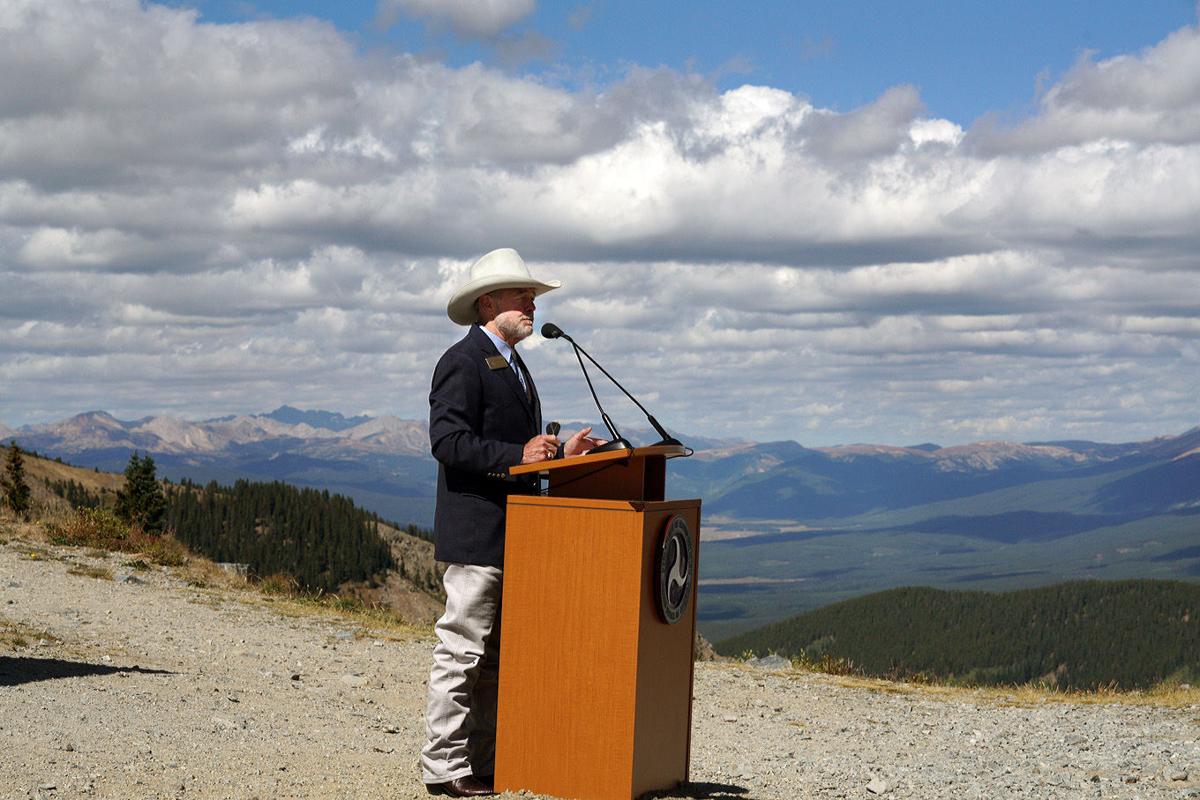 Chaffee County Commissioner offers remarks with perhaps his most stunning backdrop ever – Taylor Park in Gunnison County as seen from the top of Cottonwood Pass. 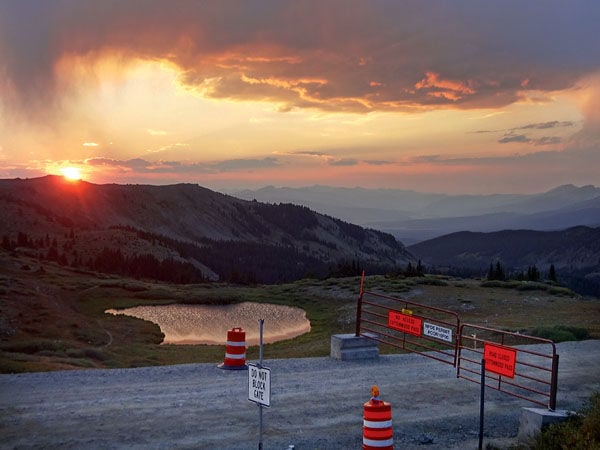 The sun sets on the closed road barricade atop Cottonwood Pass on Labor Day, Sept. 4. The Gunnison County side has been closed all season as the west side paving project began its 2-year endeavor. The Chaffee County side will be closed next season from the Avalance Trailhead for repaving. 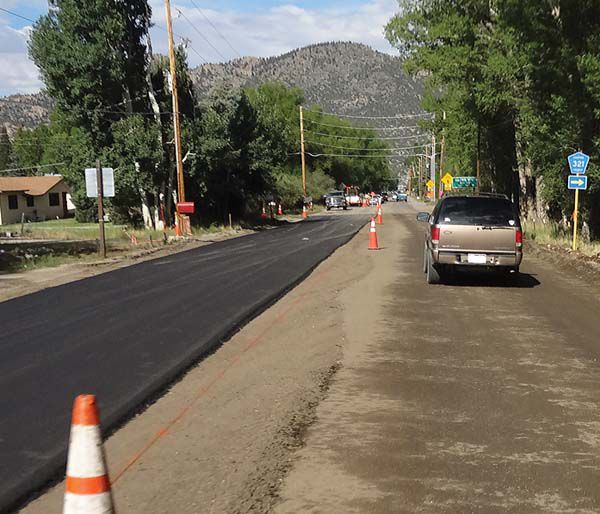 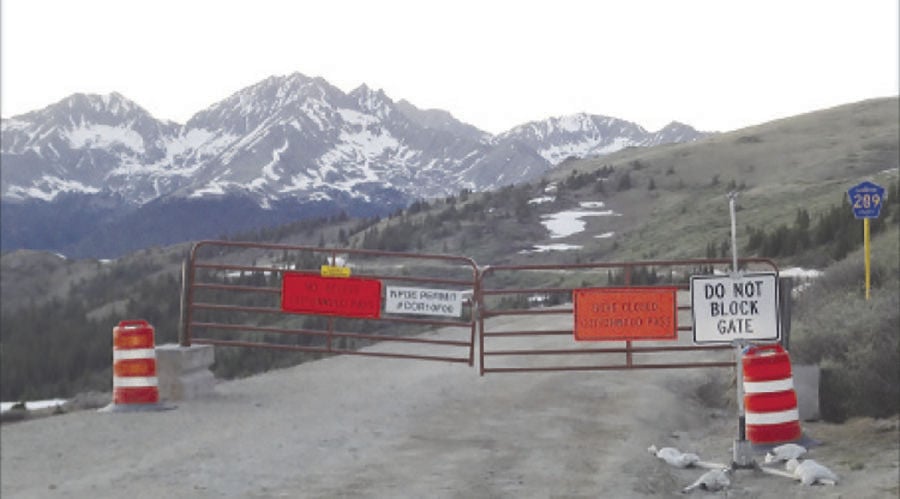 Cottonwood Pass has been closed on the Gunnison side since earlier this year as a 2-year paving project got underway. The Chaffee County side will close at the Avalanche Trailhead west of Buena Vista next year for repaving.

More than 30 people involved in the project to pave Cottonwood Pass, from Chaffee County, Gunnison County and the federal government, span the road – now the second highest paved mountain pass in the country – Thursday for a ribbon-cutting ceremony.

A lone camper heads down the east side of Cottonwood Pass Thursday.

Chaffee County Commissioner offers remarks with perhaps his most stunning backdrop ever – Taylor Park in Gunnison County as seen from the top of Cottonwood Pass.

The sun sets on the closed road barricade atop Cottonwood Pass on Labor Day, Sept. 4. The Gunnison County side has been closed all season as the west side paving project began its 2-year endeavor. The Chaffee County side will be closed next season from the Avalance Trailhead for repaving.

Cottonwood Pass has been closed on the Gunnison side since earlier this year as a 2-year paving project got underway. The Chaffee County side will close at the Avalanche Trailhead west of Buena Vista next year for repaving.

Years of at least partial closures following decades of coordinated efforts to improve the road that traverses the Continental Divide between Buena Vista in Chaffee County and Taylor Park Reservoir in Gunnison County are now officially ribbon-cutting complete.

A group of stakeholders from two county governments, two ranger districts, two road construction contractors and the Federal Highway Administration gathered Thursday at the 12,126-foot summit for a ribbon-cutting ceremony to celebrate completion of the project

Renee Sigel, director of the Central Federal Lands Highway Division, said the 31 miles of road between BV and Taylor Park ultimately cost “over $34 million in this area alone.”

Sigel joked that engineers probably could have figured out a way to reroute the road so that it could beat out Trail Ridge Road and become the highest paved pass in the country, pointing to a steep peak rising to the north of the parking area.

Speakers from each entity spoke in front of the U.S. Forest Service sign noting where San Isabel National Forest ends and Gunnison National Forest begins, reflecting on the history of the pass, first charted as a logging road, as vehicles crossed over the summit on the fresh blacktop.

“I’m retired from the Forest Service, have been for quite a while, but I have been involved with Cottonwood Pass, oh, since its inception,” said Ernie Nesbit, who worked for the Gunnison National Forest in 1956 when the Forest Service was first assigned to build a route into Taylor Park for logging timber.

“Taylor Canyon Road was too bad at that time to haul logs over, so why not build a new road from Taylor Park to the top of Cottonwood Pass to tie into the existing road from the top of the pass down to Buena Vista,” Nesbit said.

The assignment called for no more than a 4 percent grade and no more than an 80 percent radius curve. It took three weeks to flag the line, Nesbit said. It was the gentlest grade of any road crossing the Continental Divide.

After that, Nesbit was put in charge of the pass’s west side, which was paved with asphalt for the first time this year.

“It took two years to get this project ready for construction with the help of many college kids who worked during the summer to take in information,” Nesbit said. “Remember, at the time, there were no mechanical pencils, no battery-operated calculators, no other instruments. It was all done with hand labor, which was very intensive.”

The project was contracted out in 1958, split into two halves. One of the contractors hired soon filed for bankruptcy. A new contractor was found, and in 1959 the west side of the pass was completed.

“A grand opening was held right at this location,” Nesbit said.

In 1964, the dirt road was covered in gravel. The gravel, however, “required a lot of maintenance.”

Marlene Crosby, Gunnison County director of public works, said “I have had the honor and privilege of being involved with this project on behalf of Gunnison County for over 30 years.

“A project like this has many phases and contributions from many people, many agencies and many private businesses.”

Crosby named and thanked each of the contractors who had worked on the Gunnison County road going back to 1980.

Gunnison County Commissioner Jonathan Houck said that while the tools involved in infrastructure-making have changed since the 1950s, “these are still really tough projects.”

The project was technically structured as two separate endeavors on Gunnison County Road 209 and Chaffee County Road 306, which were intended to finish simultaneously.

The Chaffee County side required less work – the road had already been paved in the 1980s, but that asphalt needed restoration. The Chaffee County side of the project, budgeted for $18 million, also addressed dilapidated guardrails, widened bike lanes and redesigned parking areas at both the summit of the pass – through which the Continental Divide Trail crosses – and the Denny Creek Trailhead, the starting point of several well-traveled trails, including Mount Yale.

Construction in Chaffee County, by Kirkland Construction, closed the road at Avalanche Trailhead through much of the summer in 2018, opening to Denny Creek, the usual seasonal closure gate in late November.

The Gunnison County side required more extensive work, budgeted at $27 million, and closed at the summit of the pass in May 2016.

While Crosby pledged that the Gunnison side of the road would open in 2019, it would do so before the road had been fully paved, using pilot cars to guide motorists through the construction zone.

Naturally, the winter of 2018-2019 was the snowiest in decades. CR 306’s new blacktop was mere months old when a massive avalanche crossed the road at Avalanche Trailhead.

Gunnison County commissioners voted to delay the opening of the pass until late June.

“Initially the contractor had planned to be back at work by mid- to late April, but with the amount of snow we do not know yet whether or not that will happen,” Crosby said at the time.

During construction on the pass, crews laid an underground conduit that now stretches roughly 40 miles over the Continental Divide between the two towns, completing a long-desired loop bringing infrastructural redundancy – and therefore greater reliability – to the southern Western Slope.

“That gives us another path to and out of Buena Vista,” said Tim Kunkleman, CenturyLink director of state regulatory affairs, connecting to the I-70 corridor. “That creates a big ring throughout the southwest area.”

Gunnison and Montrose had previously been served by a single line of middle-mile fiberoptic running west along U.S. 50, carrying data to internet connections on the Front Range.

The road finally opened in August.

“What we’ve built is a road over this pass, and a road means connecting things,” Houck said. “I think Gunnison County and Chaffee County both have had a good connection for a long time. We value a lot of the same things. It’s why, geographically, we live where we do, and we really appreciate that there’s this stronger connectivity between our communities. When we look around at this vast amount of public lands, we think about the connectivity now that not just folks in our communities have, but these lands belong to everyone in the United States.”

While Chaffee and Gunnison counties both chipped in, the majority of the cost of the paving and repaving project that first began in 2016 was funded by a federal program dedicated to roads that are not federally owned but provide access to federal public lands.

Chaffee County Commissioner Keith Baker said that the completed pass is a testament to what can be achieved through the pooling of resources possible through federal funding.

“It’s important for us to continue to support these programs and let our members of Congress know that without these programs a lot of rural counties like Gunnison County and Chaffee County would not be able to do projects like this,” Baker said.

“As Rusty (Granzella, Chaffee County commissioner) and I were driving up here today, we were talking about how we would have never been able to do this in Chaffee County if left to our own devices … I think we are in a new era of cooperation between our counties.”

“We like to remember in the West that we are rugged individualists at heart, but we know that meaningful actions and meaningful projects and things that really make a difference to communities, to people, to connectivity to the outdoors happen through partnerships,” Houck said. “When these kinds of projects happen, they happen because people are working together.”

After the speeches, Nesbit led a toast to the project with sparkling water.

‘I’ve got a story to tell you about Ernie,” Crosby said before the toast. “As you know, he spent a lot of years on Cottonwood Pass. When we were doing one more field tour, I asked Ernie if he wanted to go. He was getting close to retirement, and he said, ‘I’ve burned enough shoe leather on Cottonwood Pass, but if you ever get the damn thing done, I’ll bring the champagne.”

Is Cottonwood Pass the highest?

Jim Thompson, who was a Chaffee County commissioner between 1993 and 2005 and one of the many officials to have spent time on the project that officially came to fruition last week, argues that we don’t have to settle for number two. That the road is actually the highest paved mountain pass in the state – and thus the nation – as it stands.