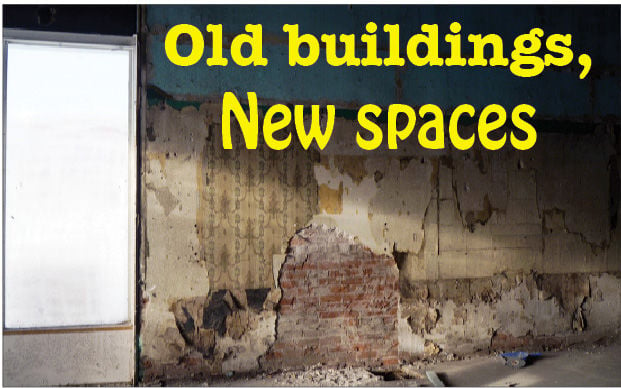 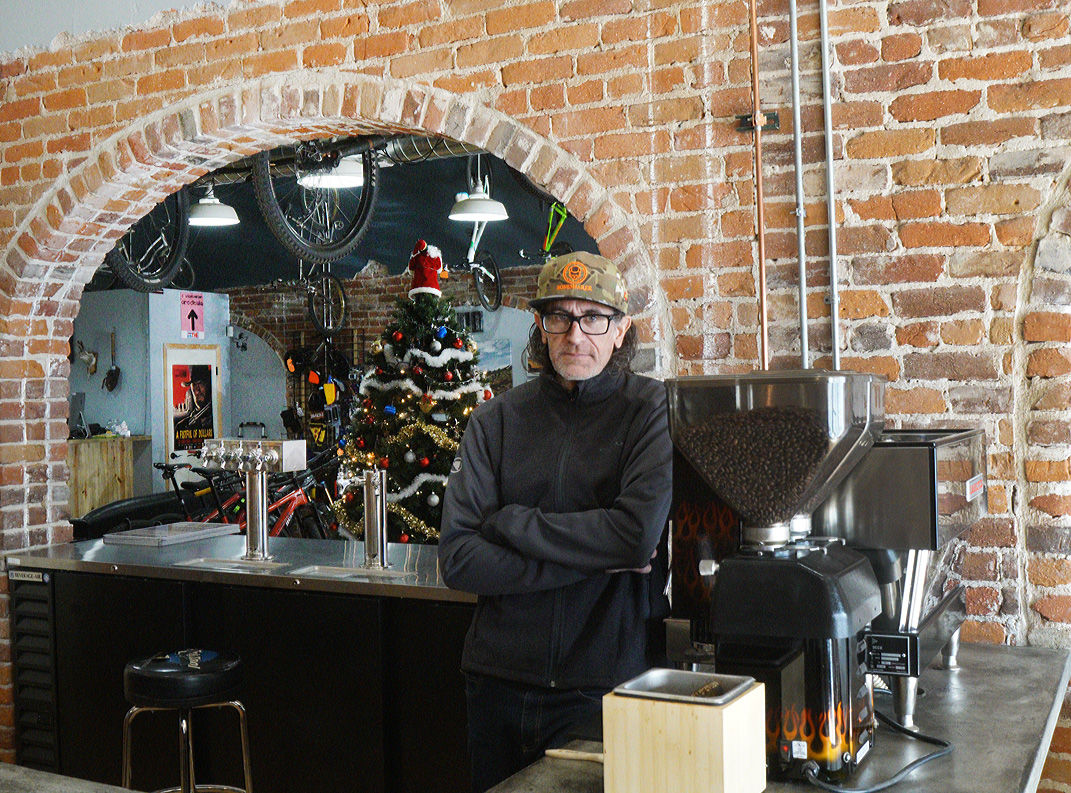 Boneshaker Cycles co-owner Joe Parkin stands by the coffee machine at Push & Pull, the bar and restaurant connected to Boneshaker that is looking to open in 2020.

An artist’s concept of the Mark’s Block building facing East Main Street once Crave opens in the spring. 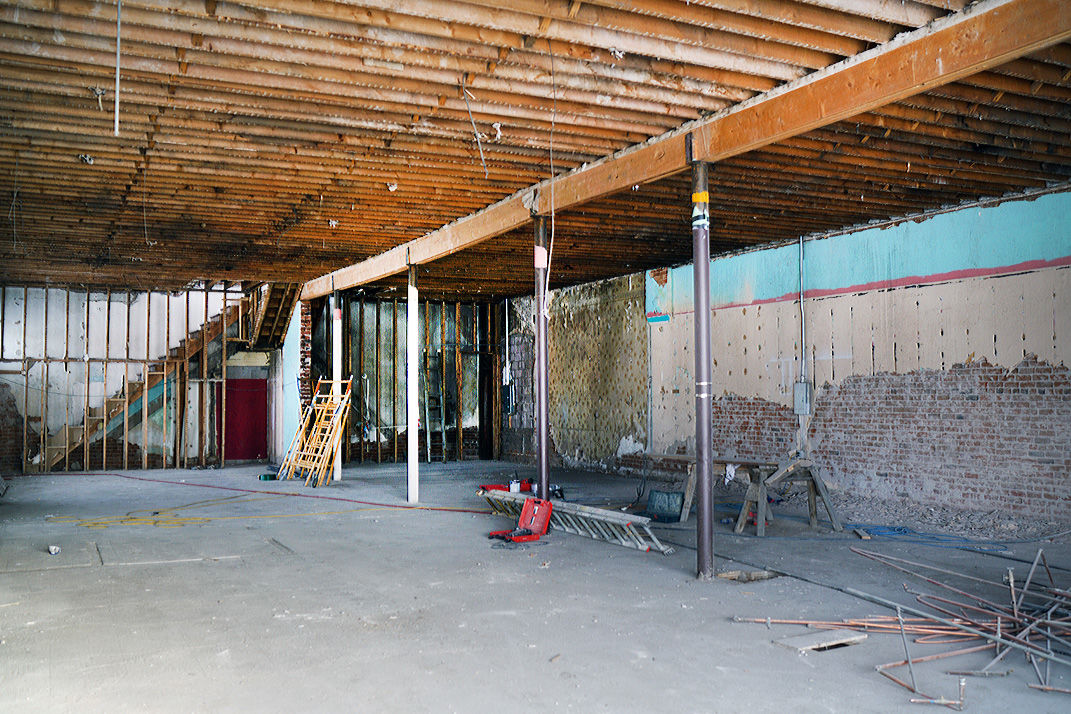 Interior of the space that will become Crave, mid-demoliotion

Boneshaker Cycles co-owner Joe Parkin stands by the coffee machine at Push & Pull, the bar and restaurant connected to Boneshaker that is looking to open in 2020.

An artist’s concept of the Mark’s Block building facing East Main Street once Crave opens in the spring.

Interior of the space that will become Crave, mid-demoliotion

When Ryan McFadden was about to open his restaurant Simple Eatery on East Main Street in 2015, sharing a space with the Trailhead outdoor retailer, he remembers looking out the window of the building.

“You could see tourists walking around looking for something to do on Main Street. Nothing was open. I mean nothing,” McFadden said.

“Literally the only thing open was probably The Lariat, on a Saturday at 6 O’ clock, and I remember thinking, wow, in about a month, everything is going to changeSoon after Simple, House Rock Kitchen opened. Then Louie’s Ice Cream,” he said.

“It transformed overnight, this section of the street here. And now the rest of Main Street’s catching up,” he said.

McFadden predicts that things are going to change in a similar way in 2020. He’s the proprietor of one of three new dining concepts looking to open by next season.

“It’s a generational thing that’s happening. It’s surprising how much busier things are now than they were even just 4 years ago,” he said.

McFadden is acting on a plan over 5 years in the making this spring, opening a new open-concept restaurant space called Crave in the ground floor of the Marks Block building at the corner of East Main and Railroad streets.

Similar to the way the Trailhead and Simple Eatery share the open space of the historic State Highway Department building, Crave will feature a pizzeria specializing in sourdough bread pizza in the section that was most recently Gone to the Dogs.

In one corner of the space, there will be a wine seller.

Still to be done is breaking down a wall in between the Gone to the Dogs space and the next door area that was most recently the Green Parrot.

In that connected space, McFadden said, will be another business, although what exactly it will be is still unknown.

“They may change out at times,” he said. “The idea is that we can help support each other with traffic and customers and not close off this space; so that way it’s just open and you can kind of wander through.”

McFadden said that “I think the idea just works. It’s been very good for us over there (at Simple Eatery) to share the space, to just work together.”

McFadden got his start making pizzas in BV as one of the cofounders of Eddyline South Main restaurant. Now he’s tinkering with a new recipe in Simple Eatery’s bakery after hours.

“I feel like we’re missing a certain style of pizza in this town. We can fill that niche,” McFadden said, drawing comparisons between Crave’s style and High Mountain Pies in Leadville.

“I want something, not necessarily deep-dish, but a little more structure to it, a little more substance. Usually they’re cooked on a brick or a rotating oven as opposed to wood-fired,” he said. “If you focus on the dough, the crust, the ingredients, it’ll have a nice flavor.”

As for the building itself, there’s still some demolition left to go, but the goal is to give the corner a look that is as historical as possible while still maintaining modern requirements for Americans with Disabilities Act accessibility and fire safety.

The robin’s-egg blue siding will be going, revealing on the Main Street facing side old transom windows.

The look of those double-hung windows will be replicated on the west-facing side of the building, McFadden said.

“Overall, (the historical society) likes the concept, they like what we’re doing with the building, the use and the return to being as historical as we can. There’s always that balance between, yes, this is historical, but this is technology, this is better,” he said. “The vision is in line with what we want it to look like.”

Also planned is a patio extending into Railroad Street, like in front of The Lariat. McFadden sees Railroad as being the next street to see big commercial growth.

Bikes, beers and coffee are a comfortable fit

Farther down East Main, another business is breaking down walls and diversifying their offerings.

Boneshaker Cycles owners Joe Parkin and Simon Stewart are unsure of when their coffee, beer and small bites restaurant, Push & Pull, will officially open, but the idea to dedicate the other half of the store to that purpose has been in mind “since before day one,” Parkin said.

They’ve been opening up the archways that separate the bike shop with its contiguous other half, which was previously leased to Souled Out T-shirts and before that Blah Blah Blah.

They’ve installed a bar built by Buena Vista’s favorite handyman (as voted by readers of The Times) Jim Brophy, some beer taps, and a manual Marzocco espresso machine in the space. Their waffle iron has arrived from Belgium in a wooden crate, as if it were a prop in the final scene of “Raiders of the Lost Ark.”

And, listening to Parkin describe the Liege waffles the iron creates, it might as well be an item as powerful as the Ark of the Covenant.

“Bike shops have been doing this for 20 or more years,” Parkin said. “About 14 or 15 years ago, I worked at a place in Minneapolis that had a similar model. … The thing I noticed about that shop in Minneapolis is that it definitely does become a gathering point of bike riders and it actually tends to recruit people as well.”

Stewart first encountered the bar-and-bike combo in Hailey, Idaho with the Power House.

“I remember when (owner Billy Olson) first started he was a bike shop with a bar, and now he’s a bar with a bike shop,” he said. “The bar is a big part for him, but it’s still a hub for cycling culture in that area.”

The concept for Push & Pull contains traces of Stewart and Parkin’s experiences following cycling around the world. He discovered the type of waffles they’ll be serving while living in Belgium as a professional road bike racer.

“Fons de Wulf – how about that for the best name ever for a bicycle racer – Fons de Wulf, legendary teammate of Joe’s, would always carry these waffles, because they’re very portable. He used to share these waffles with Joe when they were racing road bikes,” Stewart said.

“I would always ask the team management if I could please room with this guy when we were on the road for extended periods of time,” Parkin said. “His wife would make him like three or four of those Danish cookie tins full of these waffles, and every night he would share one with me. Just one.”

The desire to do a fast-and-simple coffee bar comes from the coffee culture of Milan, Italy, where Parkin worked for several years.

The espresso machine itself was purchased under the suggestion of Espresso Bob, “E-Bob for short,” who Stewart befriended in the Pacific Northwest.

“He’s one of the institutions of coffee in the American West,” Stewart said.

What’s in the name Push & Pull? A lot, actually.

“Where I’m from, when you want beer, you pull a pint, and it comes from the days before compressed gas when you actually had to pull the handle to extract the beer from the cask. And then push is, you push a shot, and then the analogy to cycling is that’s exactly what you do on a bicycle. At any moment you’re pushing and pulling on the pedals or pushing and pulling on the handlebars,” Stewart said. “It’s like life.”

Nothing to do with bike hikes, then.

For the vanishing niche of people who have developed their own photographic film, there’s a third meaning: Push and pull are darkroom jargon for varying the development time to force the emulsion to be more or less sensitive than it is rated, controlling the exposure of the image.

“Photography is so important to cycling, too, that I like that little double entendre as well,” Parkin said.

Parkin has been in conversation with other kitchens around town who may provide sandwiches for Push & Pull to sell.

“Everybody from town has been pretty awesome too,” Parkin said. “We’ve had people who have offered to share their staff even with us to help us get going.”

Evergreen transforms into a king’s greeting of a restaurant

On U.S. Highway 24, the canary-yellow building previously occupied by the Evergreen Cafe is changing hands, but will still offer breakfast to those looking to fuel their adventures in the mountains and the river.

Bread + Salt, which opened in Frisco in 2015, will be opening its second location in BV at the beginning of 2020.

“Original plan was just to fix it and rent it to somebody who was going to run it and do whatever they wanted to do,” said owner Michal Ulehla. “We spend a lot of time there in the summer and looked at the market and decided to open a Bread + Salt.”

Ulehla said, “It’s a breakfast and lunch restaurant, but a bit more modern style, a different approach to breakfast. Fresh ingredients, as much as possible local from Colorado … Everything is made in-house, including bread.”

The name for the restaurant comes from Ulehla’s home in the Czech Republic. In rural villages like the one he comes from, it was custom to greet kings passing through with a simple gift – “Greet them with good bread and salt. Just plain salt on a plate.”

BV is “a little bit of a different community than Summit County,” he said, but the restaurant’s philosophy is still the same.

“People in Chaffee County are active, they are looking for the pure stuff, the fresh stuff … give them the fuel, in the right way, so they don’t feel like they’re stuffed after breakfast and can’t do anything for 3 hours.”

“We are not coming with somebody else’s money,” he said. “Everything we make is with our family money.”

Ulehla said the people he’s met in Buena Vista are kindred spirits to that kind of dedication.

“It used to be a sleepy jewel, and now I think it’s growing up and getting known,” Ulehla said of Buena Vista.

… and still more to come

As for another former restaurant on Main Street that will be vacant going into 2020, a public hearing is scheduled for the Jan. 14 meeting of the board of trustees for a restaurant license for 410 East Main Street, the space that housed The Asian Palate for a decade until it closed its doors in November.

The applicants listed in the public notice for the hearing are Seth and Justine Witherspoon under the name “The Dish and Spoon, Inc.”