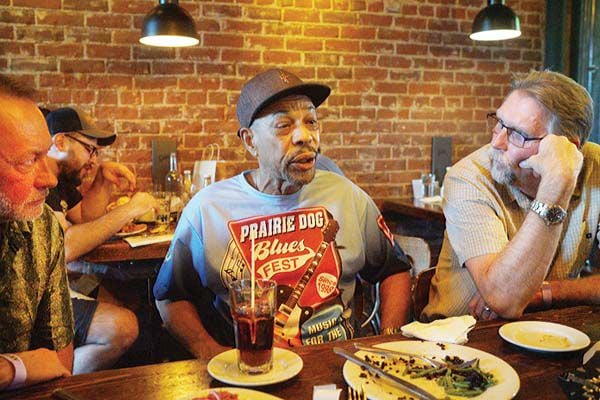 At left, Mike Alexander, far left, and Rick Streily, at right, listen to a story from bluesman John Primer. 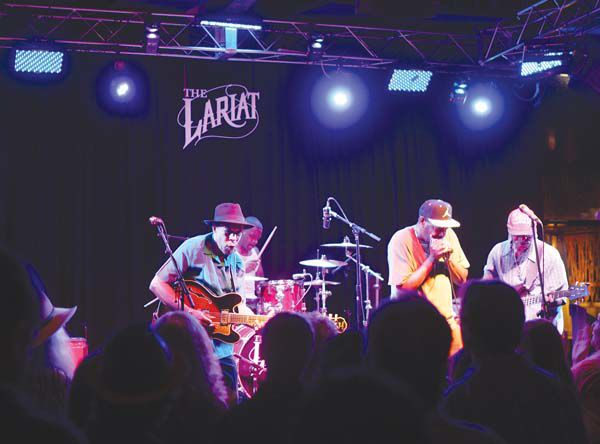 John Primer and The Real deal blues band had the place jumpin’ all night.

At left, Mike Alexander, far left, and Rick Streily, at right, listen to a story from bluesman John Primer.

John Primer and The Real deal blues band had the place jumpin’ all night.

Before John Primer took the stage at The Lariat Saturday to deliver two sets of real deal blues from Chicago, the veteran performer sat down with the winners of a drawing for dinner and conversation.

The dinner offered local winners Rick and Mary Streily and Mike and Debbie Alexander, all lifelong fans of music – especially the blues – a chance to visit with a living legend who was at the heart of that style’s transition from an oral folk tradition to a mainstream musical genre that captivated young artists throughout America and the world since the 1960s.

Primer was born in Camden, Miss., just north of Jackson and about 80 miles north of Hazlehurst, where Robert Johnson was born.

“My mom left home when I was about 6 years old,” Primer said at the table, a plate of grilled orange chicken and forbidden rice before him.

Primer left Mississippi with his mother for Chicago, a northward path that many black Americans took during the early 20th century, leaving the agricultural South for the industrialized Northeast and the Midwest’s Steel Belt.

Primer’s first guitar, he said, was ordered from a Sears catalog and cost seven dollars. He still prefers the less-expensive models.

“What’s with you blues guys and Epiphone guitars?” Mike Anderson asked partly in jest, a reference to Gibson’s budget-friendly line of guitars and the many blues greats who learned to play on a cheap mail-order guitar.

“For me, I have a Gibson, but it don’t sound the same,” Primer said. “I can’t play slide on it. The slide don’t sound right … The Gibsons have more of a round tone.”

He loved – and still does – the music of Robert Johnson, but his style “was a little too difficult for me to play,” Primer said.

As the legend goes, Johnson sold his soul to the devil at a crossroads in the Mississippi prairie to get his skills on the instrument.

Primer instead started learning tunes by Muddy Waters by ear.

“Like how Jimi Hendrix did it, you know. Just listen to the music,” Primer said.

Years later, Primer was playing in the house band at Theresa’s Lounge in South Chicago when Muddy Waters came in and said, “That guy knows my music.”

Primer had gotten the gig when he inherited it from another guitarist, who was leaving Theresa’s, Primer noted with a broad smile, because the host was a bit too eccentric for him any longer. While Primer was being shown the lounge, the owner threw a half-full can of beer at the departing former staffer.

“See,” Primer recalled the story, grinning. “That’s why I’m leaving, I can’t take it any more!”

That began Primer’s career as a touring musician with Waters, and other names who would add to Primer’s pedigree as a Real Deal bluesman – hence the name of his three-man backing band.

Primer is one of the remaining traditional blues artists touring relentlessly to keep the art form alive, and the seasoned brick walls of The Lariat frequently reverberate with the sounds of young musicians inspired by the likes of Primer and his contemporaries. Last week saw an artist residency by A.J. Fullerton and Jake Friel, two bluesmen in their early 20s, highly decorated by Colorado music writers. When Saturday evening’s dinner-hour singer, Winter Walker of Leadville, sang the word “blues,” Primer’s ears pricked up and he gave a chuckle.

He noted that the artists quarters at The Lariat lacks a television, then reflected on how easily we grow accustomed to the trappings of comfort. Primer’s childhood home in Mississippi didn’t have any electricity at all, he said, chuckling.

“It’s not for me, you understand,” Primer noted. “It’s for the band, give them something to do, you know?”

Mary Streily lived in Kenosha as a kid, a small industrial city in extreme southeastern Wisconsin, a couple hours north of Chicago.

She remembered sitting with a girlfriend Sunday mornings listening to the joyful noise emanating from the black church across the street. That was her first exposure to gospel and blues.

“He was such a sweet man,” Streily said of meeting Primer.

“Those old blues guys are for real,” Mike Alexander said. “Just down to Earth. And then he’s going to tear the roof off this place tonight.”

Rick Streily was sure to ask about playing with legends like Willie Dixon and Magic Slim in the 1990s.

“I been everywhere, man. You name it,” Primer said.

“The dinner was a collaborative effort between The Lariat and The Times to celebrate music in the neighborhood in a way that opened doors to the connection between artist and fan,” said Times editor Dave Schiefelbein.

“Number one, I’m a Chicago boy,” said Lariat owner Court Johnson, “That’s where I was born, that’s where my parents grew up … It gets in your soul,” said Lariat owner Court Johnson. “I was very conscious that this is a moment to be treasured. He’s the last of a very few left … It won’t be too long until you can’t pay any amount of money to see that.”

“What a cool opportunity for us as businesses to be able to orchestrate something like this for music lovers and readers,” Schiefelbein said. “That it’s the hometown music I grew up listening to is not a coincidence.”

“I was really impressed by the people who won,” Johnson said. “They got along with John really well because they were real blues fans.”

When he first sat down, Primer was rubbing the sleep of a pre-show nap from his eyes. He was a little self-conscious at first, but Johnson said he saw that melt away once he realized that the people sitting at the table were authentically interested in what he did.

“The actual dinner was great,” said Times advertising director Clarke Poos. “That was one of the better steaks I’ve had in a long time.”

“I ran into John and Lenny, the drummer, on Sunday when they were packing up and heading to Vail,” Poos said. “They were saying how much they love the town and how friendly the people are … I was just very grateful that he was warm and willing to do that.”

Surprisingly, a September 2017 show at The Lariat was the first time Primer had played in Colorado with his own band. Last weekend marked the second in what all – including Primer and members of his band – hoped would become a regular occurrence.”

If Primer does return to The Lariat next year, “will it be the same (people invited to dinner)?” asked Alexander.

“I like where you’re going with that question,” Schiefelbein answered.

“The best moment of an awesome evening for me was seeing the four Times readers seated around John, all of them visiting like they were old friends,” he said, “and the next time John Primer and The Real Deal band come through town, they will be.”

The dinner included cocktails and conversation, a special Arrowpoint Beef Co. sirloin with jalepeño butter offering prepared by Lariat chef Tom Campbell’s staff that was very popular at the table and a dessert tray laden with delectable sweets.

Primer ordered chicken and received the orange chicken breast with forbidden rice. Despite its ominous name and ink-black color, Primer was able to confirm that “it tastes like rice. It’s good.”

Then, it was on with the show.